With the Transforming Collections Kickstarter wrapping up this weekend, I thought it’d be a good time to get to a review I’ve had on the backburner: iGear’s Mini-Warriors Spray & Rager. I don’t own a lot of “Third Party” TFs, but the appeal of modern mini-vehicles is hard to resist.

Third party accessories & figures fascinate me. In a way, it’s a little silly because the idea of a company making an add-on kit or something to be used in conjunction with another company’s product isn’t new at all. The Colorforms Outer Space Men came into their own as a beloved property, but germinated as an adjunct to Major Matt Mason. Technology is quickly changing the landscape of these “conjunction” products though; allowing smaller and smaller companies to create high quality product. That’s the part that’s fascinating. 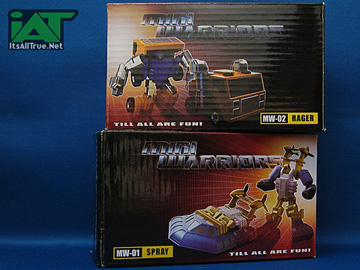 Every collector knows another collector who, with skills & tools we don’t all possess, can have pretty much whatever character they want in their collection. And, in a way, it’s that nugget that has grown into a flourishing market. This is especially true with Transformers. In addition to simple add-on kits or accessories that improved official toys, Transformers collectors are getting – rightly or wrongly – the ever-growing option to buy more and more completely new figures from third party companies. I find myself tempted by so many, TFC Toys Project Uranos being the latest drool-inducing third party item that makes my wallet cringe & hide behind the sofa.

Now this ever growing option does include an ethics test that seems largely sidestepped by the collecting community. Does this IP theft help the brand? Does it hurt Hasbro & Takara? I don’t know the answer to that. I haven’t really been pressed too because the costs largely keep me from picking up many of the third party items. 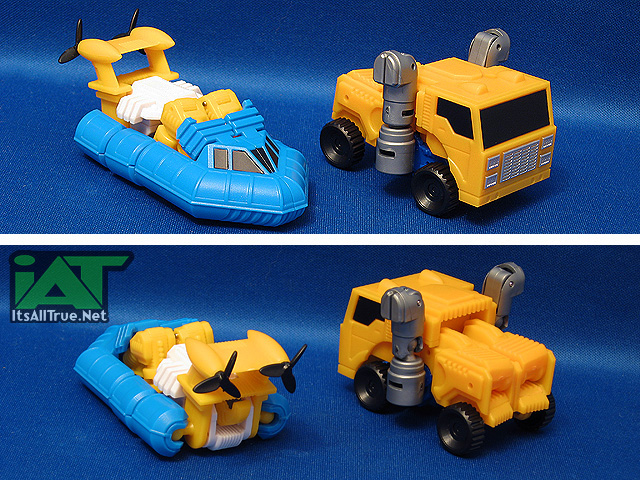 Note: I missed this while taking pics, but Spray is slightly mistransformed. The blue flaps on the roof are not completely pushed down.

If you’re familiar with the site, it’s pretty clear that comic book toys and Masters of the Universe take up a lot of my toy budget. And in those collector bases, money seems a little tighter than it does for Transformers. As MOTU has grown into a $500+ a year franchise many collectors have grumbled as their budgets are under strain. But Transformers collectors, particularly those that pick up third party items, seem to have larger toy budgets. As much as I want that Uranos, I just can’t see myself fitting into the budget at $500 or more.

With that in mind, I’ve avoided many third party items. iGear’s Medical Specialist is calling to me these days, but I could pick up plenty of other cool stuff for $100. Toy World’s Grind Rod, a modern Throttlebot, is similarly pulling at me, but $60 seems steep. iGear did manage to get me on some smaller items though with their Mini-Warrior line. 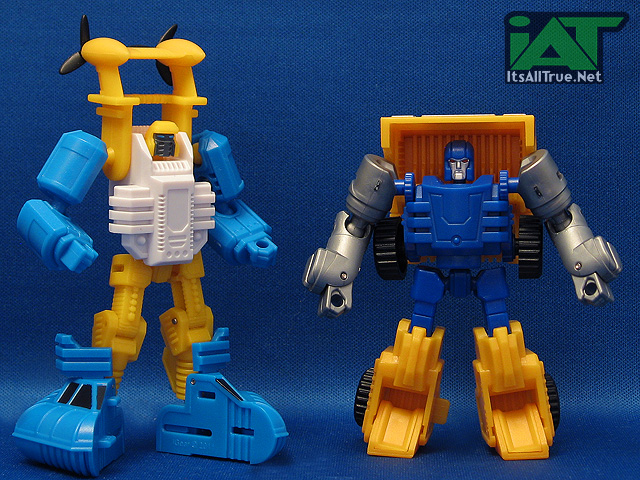 If your childhood was anything like mine, you had parents that worked hard and spoiled you when they could. While I loved Transformers as a kid, they were pricier than many of the alternatives back then, so my youthful collection consisted more of smaller Transformers than large ones. Metroplex, Scorponok, & Fortress Maximus were cool and all, but a quick check of my toy box was more likely to reveal cassettes, Throttlebots, and the Mini-Vehicles. As I mentioned in my 2010 Seaspray Review, Seaspray was one of my favorite childhood toys.

So iGear’s Mini-Warriors held a special appeal and at $15 a piece for the first two, Spray & Rager, I took a chance and picked up my first full TF third party figures (my first TF third party purchase was the new Kup heads, also from iGear). 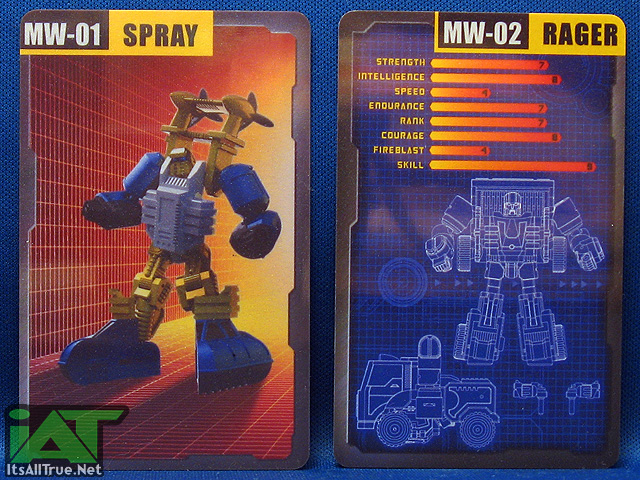 When the package arrived a little while later, I was surprised by the quality of the two figures. Both the figures come boxed with a nice artwork and a short bio and diagram of the toy on the back. The figures come packaged in vehicle mode on a tray with a spot for their weapon(s) and a little collectible plastic card that features the box art on one side and the diagram with the familiar bar graph rating system on the back. Continue to Page 2…