DCClassics.Com Asks:
In last month’s Q&A, Mattel stated that the incorrectly scaled Rocket Red figure was approved by DC, but we’re not sure how that relates to why he can’t be fixed before release. Is Rocket Red being out of scale an error that Club IE Subscribers are just being asked to accept?

He is final and we can’t make changes at this point.

DCClassics.Com Asks: We’re not sure if that many folks will armybuild Rocket Red since he’s an incorrectly scaled $45 figure, but was any thought given to including a sticker sheet with different numbers? That would allow for him to be “customized” by the consumer as opposed to locking them into one number with the tampo? 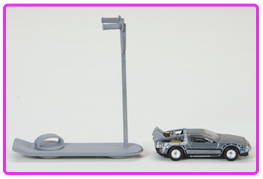 This is something we looked into but it was not working for the cost.

ItsAllTrue.Net Asks: What figures is Mattel aiming for the 6″ BTTF Hoverboard to be compatible with? Mattel describes Movie Masters, DC Classics, and MOTU Classics as 6″ lines, but one hoverboard won’t work for all of them. Which of those lines do you intend to be most compatible with the hoverboard? Basically, who gets to zoom around? Venkman, Batman, or He-Man?

It will work with a variety of 6″ figures. We hope to have some comparison shots soon! 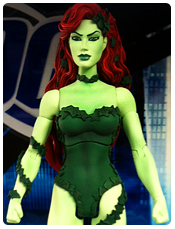 MOTUClassics.Com Asks: We understand that all of Mattel figures are subject to the same safety standards regardless of the ‘adult collector’ label, but do the Snakemen teeth have to be so rounded/dull? Is there anyway to make them appear more fierce and stay within safety guidelines?

Yes, we do have standards. Although these are adult collectables out of the box they work as kids toys so we have to apply that standard.

DCClassics.Com Asks: Any chance of swapping out one of Poison Ivy’s fists for an open hand sculpt? Either something new or a Cheetah hand for a “plant summoning” pose?

No, we don’t have time for the Horsemen to make sculpt changes to her. We are going with their design.

We need your questions for the next round! Submit your suggestions on the ItsAllTrue.net Forums…