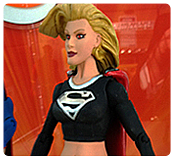 DCClassics.Com Asks: If redecos are going to be part of the All-Stars lineup, has Mattel given any thought to directly polling the collectorbase for repaint ideas? Allowing collectors to provide some direct feedback or participate in a poll with limited scope (like no changes to paint masks) would encourage company and collector relations while letting the consumers feel like they have a hand in the usually less desirable repaints.

All-Stars are actually a combo of new figures and reissues. There will be no redecos.

ItsAllTrue.Net Asks: We haven’t heard much about Ghostbusters since the cancellation of Club Ecto-1, how is the Rookie figure coming along and has his accessory list been finalized?

You will see the Rookie at NYTF’s collector event.

Editor’s Note: In case you’re actually interested in this figure, allow me to go ahead and do the footwork here. The Rookie has been moved up in the schedule, he’s now before Dana and is currently slated for April. From the pics at Toy Fair, it appears he’ll include a deactivated PKE and closed trap on his belt, the proton stream attachment, the ghost trap with a new orange effects piece, and new goggles from the game. 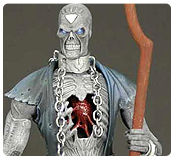 DCClassics.Com Asks: Has any progress been made on finding a way to release Nekron’s scythe? After snapping up all of Wave 20 and building Nekron, he still feels like he’s a missing a piece since his accessory is integral to his look.

Having to delete this accessory was not something any of us wanted to do, but the skyrocketing cost of labor and raw materials made it an unfortunate victim. We are looking into ways to release it since it is sculpted, but as of yet we have not found a way. Had the 2012 sub sold better we would be able to look into adding things like Weapon packs, but as of now, we only have enough subscribers to basically “keep the lights on” and are not able to add any additional items yet. We’ll have to see how day of sales go and more importantly now the 2013 sub sales go this July. 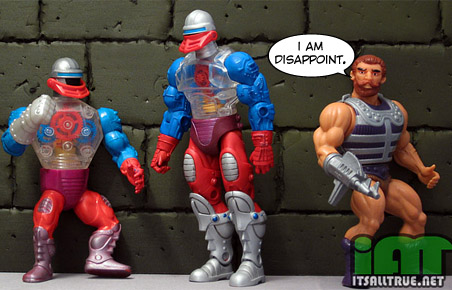 MOTUClassics.Com: Fans are happy to finally have Demo-Man in-hand, but we’re still left knowing next to nothing about the character. You know we’ll keep reading the bios, but are there future bios in the pipeline that will shed more light on Demo-Man or the Fighting Foe Men?

Yes, you will find out more in time!

MOTUClassics.Com Asks: With interchangeable parts coming back into style, are Mattel and the Four Horsemen making a more concentrated effort to look for interchangeability in MOTU figures? Fisto is awesome, but his inability to part share with Roboto & Trap Jaw ended up being a drawback. Will future figures have that aspect more carefully considered so opportunities aren’t missed?

Fisto was never intended to share parts with Roboto or Trap Jaw. We leave these choices up to the Four Horsemen.

Editor’s Note: When we asked about interchangeability after Fisto was shown, we were told “Terry Higuchi from design is still working this out“. In October, it was “likely that is what we’ll do“. And when they didn’t include it, it’s become a choice “left up to the Four Horsemen”. If this really is a choice left up to the Four Horsemen, why was Terry Higuchi working on it last year? Should we be directing our interchangeability requests to the 4H directly and bypassing Mattel? Does the Mattel Answer team know that all the past Q&A’s are still available to be referenced? All these questions…