Toy Fair is once again in full swing! That means it’s time for another round of IAT Armchair Coverage! We’ve already seen some amazing stuff at the Four Horsemen’s Toypocalypse show, will the big companies at Toy Fair be able to keep up? I’ll be updating this page throughout the show.

Before I get into any the roundup, I want to give a huge shout out to the folks that attended this year. For those of us that are unable to attend, they make this weekend miserable for our wallets instead of just miserable for us. The sites attending are there with their cameraphones tweeting pics and information, only to get back to their hotels later in the evening and add the information and full galleries to their sites. That’s a lot of work, so make sure you let your fave sites know that it’s appreciated!

This page will be a work in progress, in years past I would post it when I was done, but this year, I’m going to try updating it as I go – we’ll see how that works out…

Be sure to check out our ToyPocalypse Armchair Coverage for everything Four Horsemen! FanEx, Outer Space Men, Gothitropolis, Symbiotech, some new Glyos/Callgrim, and some sweet customs to boot! 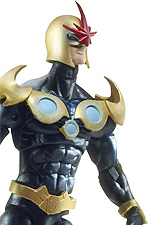 I’m going to kick off with Marvel Universe because I’ve already got the checklist updated! The 2012 Page has all the information ready to go and pictures will be forthcoming. There weren’t a lot of Marvel Universe reveals though. Miles Morales and Paper Bag Spidey were confirmed as running changes in 2012 in Waves 18 & 19 respectively and Blastaar will have a clear hands variant in Wave 21. New 2pks and 3pks were announced: Defenders 2pk featuring Dr. Strange & Silver Surfer, Cap & Falcon 2pk in 70s Deco, an Inhumans 3pk with the previously teased Karnak, Medua, & Black Bolt, and an Uncanny X-Men 3pk with 90s Rogue, Longshot, Brown Wolverine, and a Baby Cyclops.

Some previously announced items were shown again like the Avengers 3pk with a redeco of Thor, Bleeding Edge Iron Man, and a Red Hulk (that appears to use the new body) as well as new images of Wave 20 including Puck, Angel, Nova, Nighthawk, & Hercules. Strangely, no mention of the Masterworks Fin Fang Foom. Hit up MarvelousNews for press images and gallery images or ActionFigurePics for their MU report.

Marvel Legends seemed like it’d be the line to watch at Toy Fair, but there were few new reveals, the idea seemingly being that Hasbro wanted to hold on to surprises for SDCC, a more “collector” event. I don’t get it, but I’m glad we got some new tidbits. Mystique was named as a Series 3 figure with an image of her more recent leather look shown and a Hyperion figure was discussed, but nothing was shown.

There were some nice pics to see in the galleries though. Blade & US Agent look awesome and I can’t wait to have them on my shelves. Though I would like to know who exactly they’ll be building? For pics of the new Wave 3 figures and some good shots of the upcoming Wave 2, I’m again going to send you over to MarvelousNews

Mattel posted a MOTU Classics list on their site just as the coverage began: 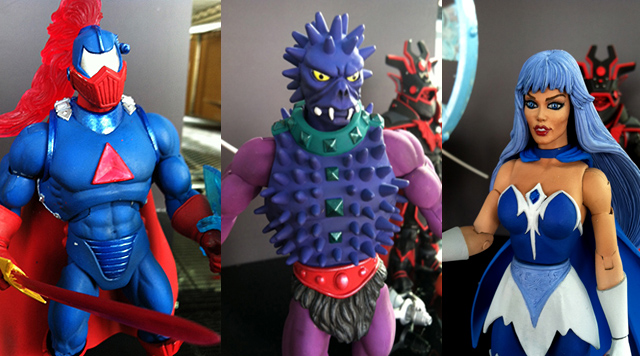 My thoughts on these reveals vary. I think Snake MAA is much improved with the Roboto bits, I’m not happy with the yellow hand (mostly because I hate that useless hand) and boot, but I like the other new bits enough. I still could do without this figure though. Spikor was always going to end up in the back of my display and I see nothing here to change my opinion. The Snakemen 2pk is one of the nicer pieces so far this year, looking forward to that (and check out the new pieces all over, there’s surely some more Snakemen in our future). Sir Lazer Lot – honestly? I kinda like him. He’s waaay too blue, these writers need to get a little more design help, but I do like his overall look. I like Frosta, but I was a bit surprised to see her not look like a trademark 4H lady. I know we’re supposed to “talk to the 4H at their site” for deco changes (hey, he’s just the brand manager, okay?), but I’d like to see someone cut down on her eyeliner before the final figure – the eyes in the mockup linked up above look much better to me. 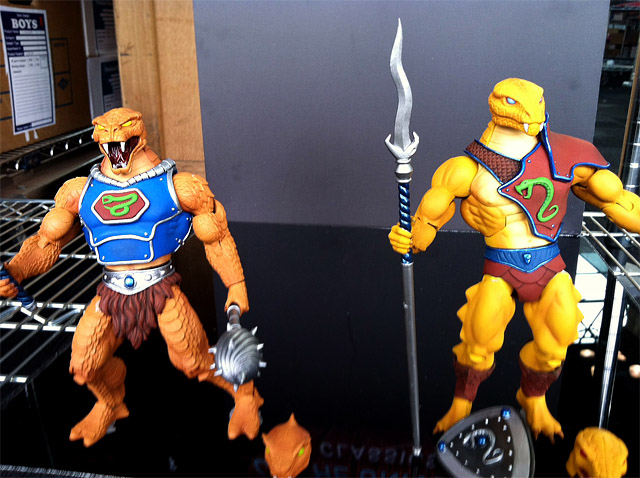 The information (including schedule updates) has been added to the MOTUClassics.com Upcoming Releases page.

Also, check out this pic of some MO2K Weapons from Pixel Dan! Curious to see where these end up! 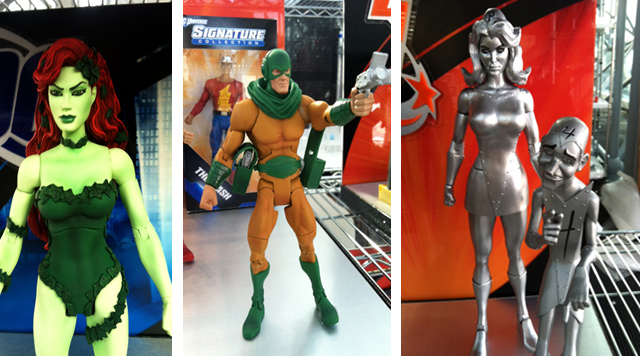 I’m happy with these reveals. I couldn’t decide which version of Ivy I wanted more, but I’m happy with this one – Figures.Com got a great shot of her in their gallery. Platinum, Mirror Master, and Black Mask look great. The only reservation I have at this point is if they still intend Rocket Red to be an oversized figure. Mattel has (no surprise) elected to use the Geoff Johns version of Rocket Red that debuted in Green Lantern #10 (and has been subsequently discarded). That design* features a skintight suit with armored areas and has no business being bigger than a normal figure. Let’s hope that one ends up as a regular fig…

* – And Mattel – are you guys just phoning it in? Rocket Red with printed numbers on the armor? Hello? Make it blank and throw in some stickers so some sad souls will want to buy multiples…

It appears that Atrocitus is a bit taller from the pics, but I can’t say for certain. But, Starman’s new head is looking pretty sweet in this shot at AFI. 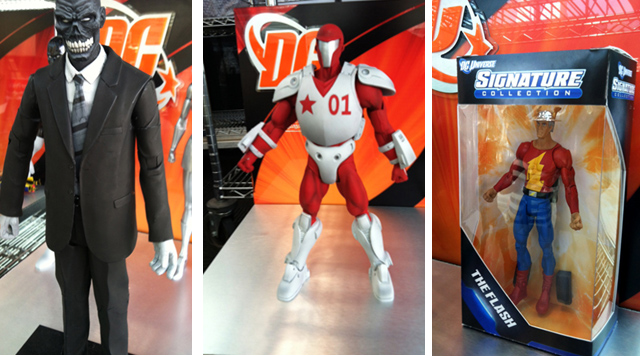 Mattel didn’t debut anything new for the DCU All-Stars retail line, but they did have three of the four Wave 2 figures on hand (I haven’t updated the checklist at DCU All-Stars yet, but wave has the three pictured below and Red Robin. Flash appears to have gained some yellow lines on his costume for no real reason. Sadly, I do think that’s my favorite Superman head sculpt yet. I might need to do a swap (if we ever get that Carolina Blue Superman…). This line still kinda sucks, I’m waiting for Mattel to make me care about instead of relying on my “I buy DC toys” basic programming…

Here’s a long shot of all three DCU All-Star figures together at Figures.Com 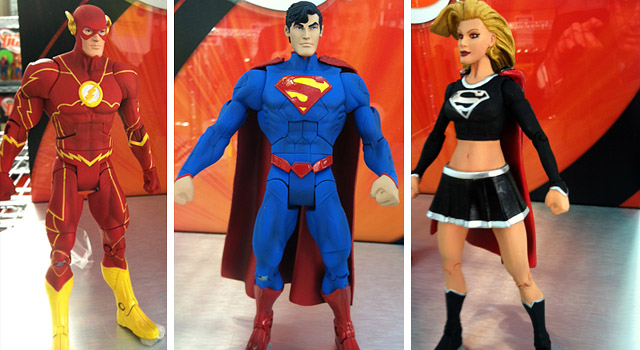 Young Justice had a small table display that really only revealed what figure will be paired with Batman in Wave 5 of the $20 6″ line – and it’s Superboy! Again! Okay, I really can’t complain as he is needed to complete the main roster, but Mattel’s really got to get to Miss Martian in Wave 6, and I prefer the white/blue version please.

And is it just me, or do the bases seem to be getting smaller? Batman’s rooftop is a little more economical than the first two and Superboy’s is downright tiny, like an old ML stand. Check out the first two pics in this Figures.Com Gallery and you’ll see what I mean.

JLU isn’t dead just yet! Mattycollector will be offering the last of the last figures on Mattycollector next year according to this post at AFI. The packs will be monthly in the second half of the year and sell for $30 each. One highlight of this set is the inclusion of Firefly and Dr. Destiny, two previously unannounced, but eBay leaked figures. That’s not counting the long awaited Blue Beetle and Toyman or my personal favorites the Future Superman and clear green Fire (I like weird things, okay?)

Here’s an Action League pics via Figures.Com and ToyArk. I haven’t heard much on this line, but it looks they’re mixing DCnU in even quicker here (which isn’t a surprise since a previous wave was Flashpoint)

DC Direct doesn’t do much that interests me these days, but TNI has some pics from their showroom here. There’s a decent figure of the New 52 Parademon if that’s your thing, and if not then some weird Ame-Comi’s (via ToyArk) that answer the question of what the modern Brainiac would look like as a girl and if Harley Quinn were even more weird. Apparently, there was also a Toy Fair Exclusive Rorschach (via ToyArk).

This sad little line is still chugging along. There’s been no word on that little “surprise” for us former Club Ecto Subscribers, though I’m starting to think it might be that we no longer have to buy Dana as Zuul. The figure is turning out to be more of a statue – AwesomeToyBlog has the figure with the torso on the sitting base while TNI has it on the standing figure. Maybe the neck is articulated?

Gallery at AwesomeToyBlog (If nothing else, check it out for the Jabba the Hutt bobblehead.)