I’m a day late on this Masters of the Universe Classics news, but I had a few thoughts (& criticisms) I wanted to share about it. On their Facebook page, Mattel has given us our first look at Battleground Teela in package. As usual, the figure looks great and the bio is… well, it is what it is.

Here’s Battleground Teela in package. Her new bio is reprinted below… 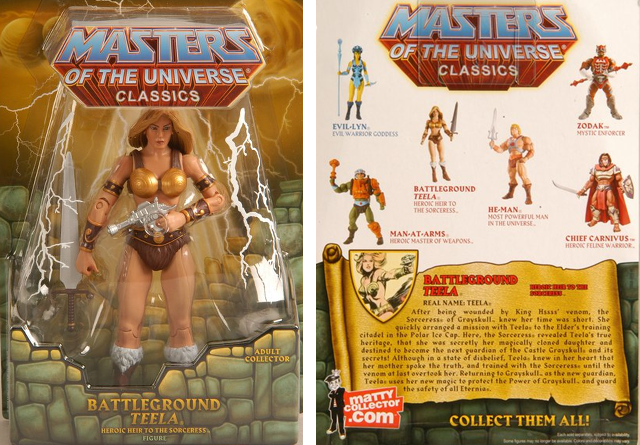 Battleground Teela – Heroic Heir to the Sorceress, Real Name: Teela
After being wounded by King Hssss’s venom, the Sorceress of Grayskull knew her time was short. She quickly arranged a mission with Teela to the Elder’s training citadel in the Polar Ice Cap. Here, the Sorceress revealed Teela’s true heritage: that she was secretly her magically cloned daughter and destined to become the next guardian of Castle Grayskull and its secrets! Although in a state of disbelief, Teela knew in her heart that her mother spoke the truth, and trained with the Sorceress until the venom at last overtook her. Returning to Grayskull as the new guardian, Teela uses her new magic to protect the Power of Grayskull and guard the safety of all Eternia!

If I might offer some commentary on this bio…

I do like it and I think it works as a story snippet. It does explain how we get from Teela to Sorceress Teela – but I don’t think it works with the look of the figure. Why does Sorceress Teela look like He-Man? Why does she need a pistol and a sword if she’s the Sorceress? The bio fails to answer any questions that the figure elicits. The writer(s) applied a pre-arranged story to the look of this character without considering how it goes with this character. I’m starting to believe that when Toy Guru says “the bios were all written at once”, he might mean the narrative was written at once and the bios are pulled from it as needed. I could be wrong, but it does feel that way with certain characters. Either that or we must accept that Scott Neitlich & his team knew as far as back as 2008 that we, the fans (with no idea how the line was going to play out) would demand this version of Teela and he had the tremendous insight to work her in the mythos that far back. I’ll leave that up to you to decide for yourself.

As for the specifics, I don’t mind most of the events described here. All the characters will die some day. And I’d like to know when & how because I believe that all heroic tales require an ending. I don’t mind Hssss being the one to kill the Sorceress, but from a storytelling standpoint, this ups the ante. Hssss must be taken down and must be taken down mercilessly (and ideally by Man-At-Arms). Perhaps the bio writer(s) know that and it falls under “keep reading the bios”, but I don’t know if that’s been considered because I don’t really feel like these bios have formed a well-written narrative so far.

And therein lies the rub. If these bios are going to continue to be story snippets instead of biographies, then they need to be better, more cohesive. The wait and see aspect doesn’t do it for me, because the bios so far haven’t filled me with hope. We’ve introduced that Hssss kills the Sorceress. How long, if ever, are we to wait and see how Hssss is paid back for that? If these bios are a long form & serial narrative, then that needs to be told sooner rather than later. Small setups and payoffs is how you make this type of storytelling successful. Bios, like this one, that raise questions, should soon be followed by bios with the answers.

Teela’s bio has been added to our Sortable/Searchable Bio Page at MOTUClassics.Com.

23 thoughts on “Some Thoughts On
Battleground Teela in Package”