I was going to pair Mongul up with the Manhunters for a “figure I like” versus “figure I don’t like” review, but the holidays and trips to see the in-laws have changed my plans. Mongul is getting a solo review, but is he the figure I liked or the I figure I didn’t? If you’re a DC Comics reader, I bet you already know.

In the comics, Mongul is a coulda been. Created by Len Wein & Jim Starlin, he appeared in the early 80s as a recurring Superman villain*. His most notable story is easily the Alan Moore penned “For the Man Who Has Everything” which appeared in the 1985 Superman Annual. It’s a great story, but Mongul was ultimately pwned by Robin and things went downhill for him pretty quickly after that.

* – Mongul’s first appearance in DC Comics Presents #27 somewhat inadvertantly set him up as a great Martian Manhunter villain. I sometimes wonder how different his character would be had he become a major rogue for J’Onn instead of fading into the background among Superman’s rogues…

Mongul did have a large role in Reign of the Superman/Emerald Twilight (he’s ultimately responsible for the destruction of Hal’s hometown, Coast City), but after that he just shows up to get beaten up. By Hal. By Kyle. By Wally West. In Underworld Unleashed, Mongul was killed by Neron because Mark Waid had to kill someone to prove how badass Neron was. And Mongul’s been dead ever since. 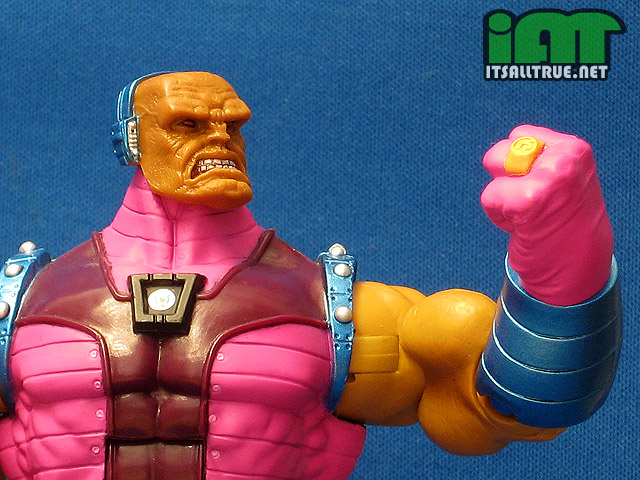 But wait, you say? If Mongul’s been dead – how is he in the Sinestro Corps? Well, I left out the bit about his son, Mongul. Mongul, Jr appeared as a baby in Showcase ’95 #8 and then, just a few years later, showed up full grown in the “Our Worlds at War” crossover. It’s that Mongul that fights Imperiex, gets a Sinestro Corps ring (or six), rips out Arkillo’s tongue, and gets pwned by Sinestro after attempting a coup (think “Mongul Corps”). Mongul and his dad are admittedly very similar, but there is one major difference – Mongul, Sr is ‘only’ around 7ft tall and Mongul, Jr is huge – Arkillo huge. So… repainting the Dad’s figure into the son? Doomed for failure from the drawing board. 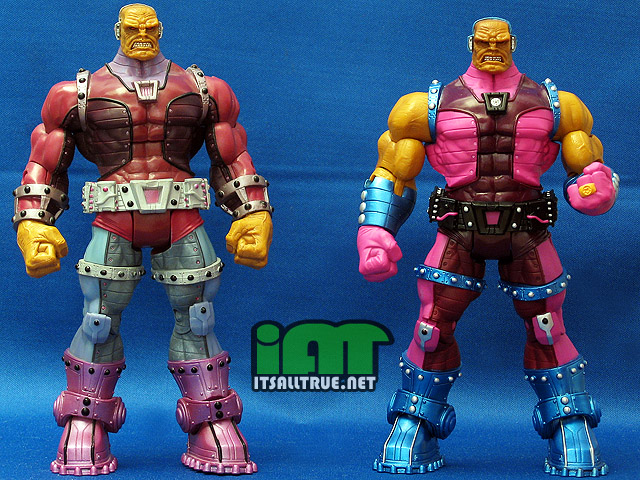 The original Mongul figure was awesome and I was excited to find it (at Big Lots!) back in the day. The Four Horsemen went all out on the completely unique sculpt and amped up the detail well past most of Mongul’s classic appearances. And I believe the figure was better off for it – it’s still looking cool and adding variety to my DCUC shelves today. But that same detail turns around and causes problems here. The original Mongul costume was essentially correct, but with added detail. Mongul, Jr’s costume is pretty much wrong with a bunch of added details.

Mongul does sport some new arms that are accurate to his early appearances as a Sinestro Corps member (he would go on to get six rings and some armor for those hulking biceps) and that does help the figure somewhat, but you almost wonder why Mattel bothered considering nearly everything else is off-model. 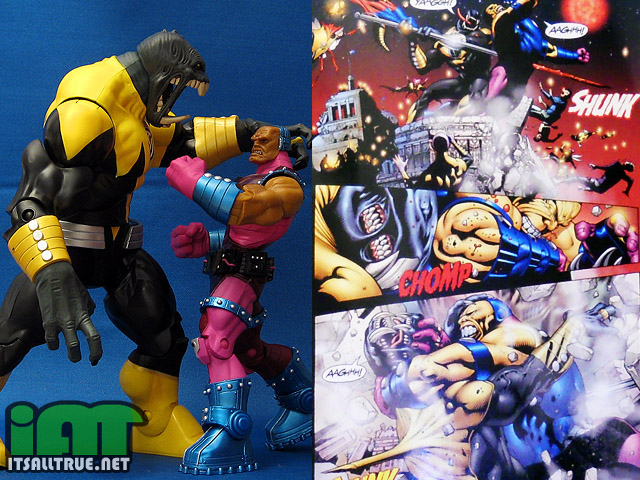 Are you tired of me nagging on the figure yet? I hope not, because I’ve still got one more big issue. If it wasn’t bad enough that he’s woefully out of scale, or that his costume is more or less made up, Mattel went for a whole new level of wrong when they painted him. When Mattel unveiled the 4H paint master (left inset, below) it wasn’t that objectionable. The colors matched the comics (right inset, below) and that alone seems like it would cover up most of the inaccuracies, but something clearly went wrong along the way. Really wrong – the purple became hot pink and, inexplicably, navy blue turned into a burgundy/merlot. 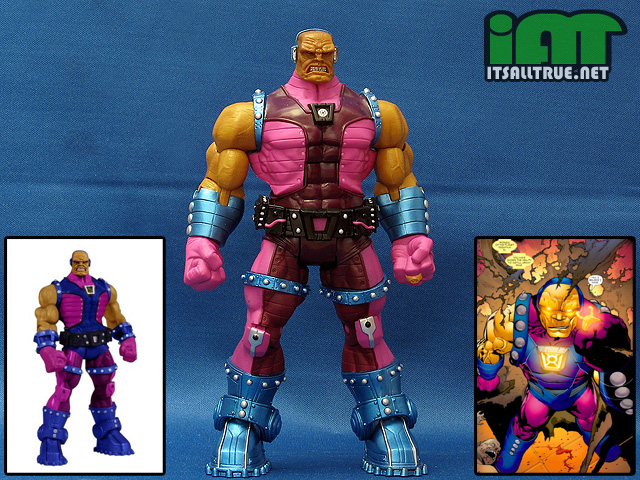 Mongul’s articulation is still great. I loved the original because he was a big guy and he could still move like the regular figures. Ball jointed head and shoulders. Swivels at the biceps, wrists, thighs and waist. Hinges at the elbows, knees, and ankles. Topped off with the Mattel hips and an ab crunch. Everything moves pretty well and, like I said, he can get into some cool poses despite being a bulkier figure. 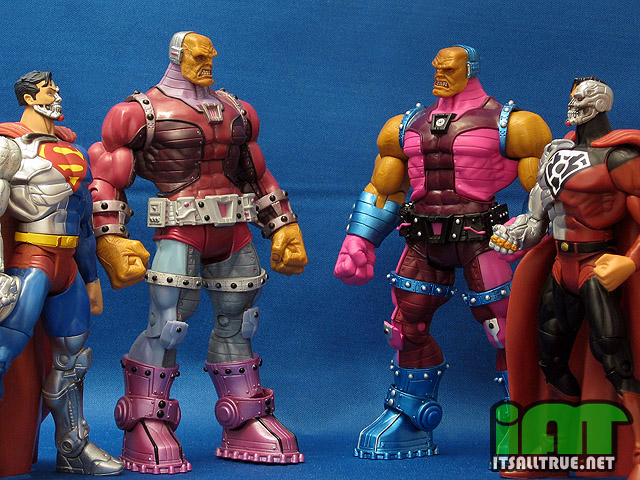 Overall, I just have to laugh at this figure because he’s such a disaster. The folks at Mattel either didn’t know or didn’t care about the scale issue (did any one tell them this was a different Mongul?) and the final colors apparently came from the Barbie division.

Much like Starfire, this figure was scheduled before they were able to do it right. A proper SC Mongul should be a C&C becuase he’s a big guy and becuase he’d end up with a cool comic accurate action feature – a detachable arm! In the comics, his arm was severed, but the yellow ring kept it viable and nearby. That was unintentionally hilarious in the comics and would really help here.

For what it’s worth, it looks like the Four Horsemen did their best to save this guy – the new arms are weclome and the colors on their paint master could’ve made for a decent, if undersized, figure. But this out-of-scale hot pink monstosity? He’s coughed up his Arkillo piece and he’s headed for storage. 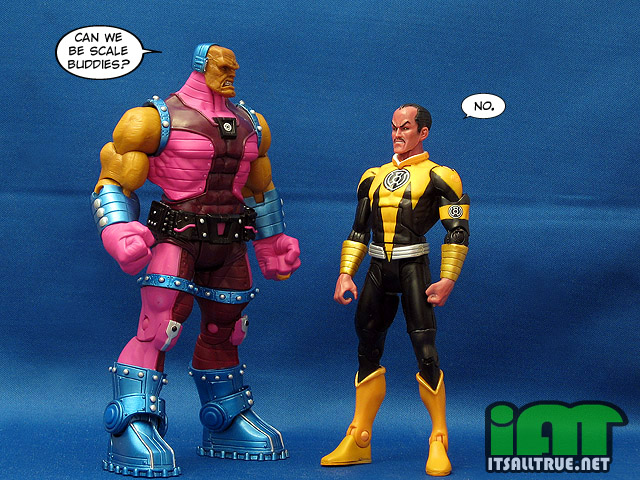