If you’re a Transformers fan, one thing you can always count on is the inevitable repaint figure. Even in lines as small as the War for Cybertron, Hasbro’s able to squeeze at least one in. So to wrap up our coverage of the War for Cybertron figures, here’s my review of Cliffjumper.

I never paid much attention to the Autobots when I was young. In shows like He-Man, GI Joes and Transformers, I usually found the villains much more interesting. But as I’ve grown older, I’ve learned to appreciate the struggles of the good guy as well. Cliffjumper, or Red Bumblebee as I used to call him, has especially grabbed my attention in recent years, mostly for the fact that he’s highly belligerent and slightly paranoid. I also love that The Rock did his voice in the new cartoon.

Like the hundreds of Cliffjumper toys before him, the War for Cybertron Cliffjumper is a repaint of Bumblebee. The poor bot just can’t get his own mold it seems. But at least this Cliffjumper has a brand new head sculpt, one that I particularly like. It has a perfect G1 look with an unamused/disapproving countenance. It’s also much thinner than Bee’s obese noggin, which goes a long way in making the figure look less chubby.

Cliffjumper is molded in a fantastic fire engine red that really makes him stand out in a crowd. I used to think the WFC Optimus was red, but I guess I was mistaken. Cliffjumper’s deep ruby color makes Optimus look orange. The red is nicely offset by black, on the wheels and windows, and yellow, thrown in on the piping and lights. I think this combination of colors comes together to make him even more sleek than Bumblebee.

Something else I really liked about Cliff is his translucent bits that show in car mode. Where Bee only showed a small ring of clear red on his wheels, Cliff’s wheels are entirely red. It kind of makes him look like he’s rolling around on some red Life Savers, and who doesn’t like Life Savers? I also love Cliff’s headlights. They look so much better in that deep translucent orange than Bee’s blacked out ones.

Sadly, being the repaint that he is, Cliff doesn’t come with any of those huge guns he pulls out of nowhere. Instead they gave him Bumblebee’s little hand blaster, only in red instead of yellow. Cliff also gets those cool energy blades that flip out from his forearms, this time in dark orange instead of Bee’s red ones. I realize there’s a certain price point Hasbro has to stay under when making any figure, but since Cliff is just a repaint with a new head it would have been nice to also see a new gun. Maybe a repainted one from Blurr. 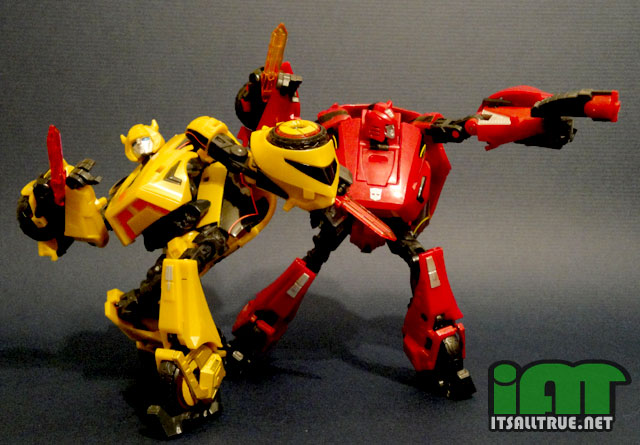 Even with the tiny gun, I’m still really happy with Cliffjumper. I really dig the thinner head and think it goes a long way in making the body look less plump. Plus, I didn’t think anything could improve on Bumblebee’s car mode, but Cliff’s deep red and black color scheme transforms it from cute to sporty. I found my Cliffjumper at Target for about $9, which is a good price. Now if only they’d make a few more characters from the game. Trypticon anyone?