The year is almost over & you wouldn’t believe how many Transformers we have sitting around waiting to be reviewed. I blame Matty and the torrent of DC Universe Classics they’ve unleashed upon us in the last couple months. Anyways, we’re finishing up our War for Cybertron reviews with Megatron.

I actually bought Megatron before WFC Soundwave, but the poor fellow just couldn’t hold a candle to my favorite Decepticon. So Soundwave got reviewed first and Megs got pushed back to… now. 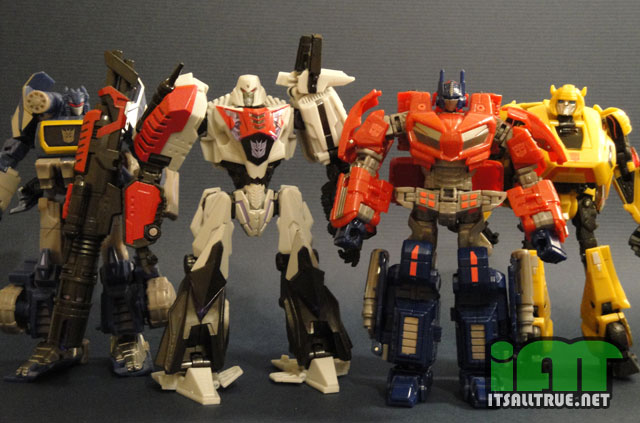 I’m a really big fan of this look of Megatron. He’s got the perfect blend of G1 mixed with just enough modern influence of the Bayformers to give him a new look with a nostalgic feel. I’m not a huge Bayformer fan, but I do like the influences it’s had on the non-movie toys. I’m glad to see robots that don’t look like they’re made of squares or rectangles, with articulation that can match or beat today’s standard action figure. 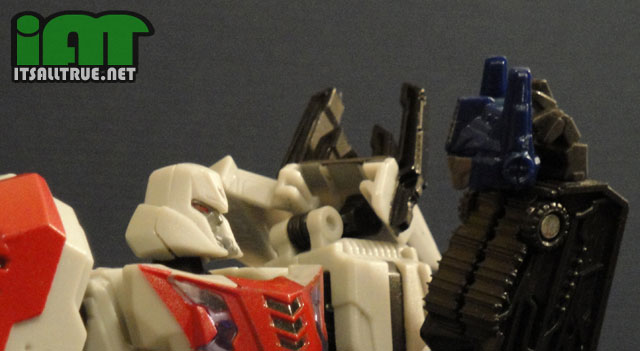 This Megatron has got to be one of the more intimidating versions of the figure. Just look at his face. It’s all squinty and scowling like the old guy at the end of the block who can’t wait to ruin someone’s fun. Don’t let your ball fall in old man Megatron’s yard or you’ll never get it back. I heard he called the cops on Arcee’s lemonade stand because she didn’t have a permit. 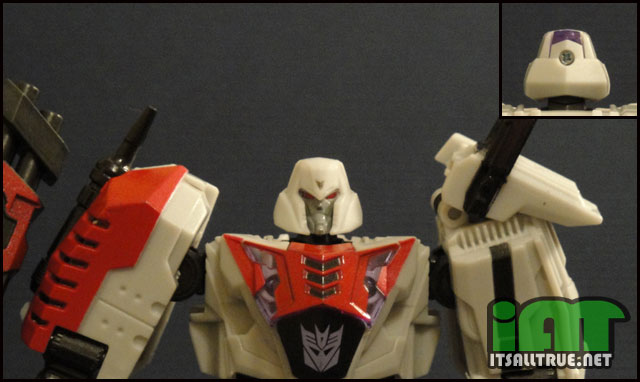 One thing I don’t like about the head design is that they painted over his eyes. Just like with WFC Soundwave, there is a translucent block of light piping built into the figure but Hasbro chose to paint his eyes instead. I don’t really understand why. We all know Transformers are cooler with light piping. If Hasbro wanted his eyes to be red, they could have just made the translucent plastic in his head red. I don’t know, it seems easy to me but I might be missing something.

Then there’s his body, molded in the classic light gray and pointy nearly everywhere you look. Just take a gander at his chest armor, jagged knee caps, and whatever those spiky pincers are on his shoulder. Megatron gives the impression he can kick Autobot butt even without his giant arm canon. 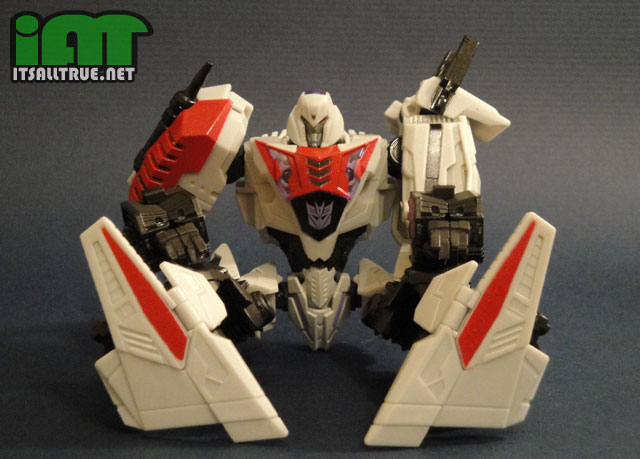 Something I found a little humorous is Megatron’s humongous flat feet. He looks like he’s standing on some strange triangular Cybertronian snow shoes. I’m assuming they are mostly this big as a byproduct of design, making sure the figure stands up in a stable way, but I’d like to imagine they act like supports, bracing his body from the devastating kickback of his canon. Continue to Page Two….