Well, my long search is at an end. After months of making the rounds between my local Wal-Marts, Toys R Us, and Target, I finally found a Transformers: War for Cybertron Soundwave. It’s been a very long time since I’ve had to hunt for a figure that hard, but lucky for me, I think it was worth it.

It’s interesting to see what characters people are drawn to. I’ve always been a fan of the villains, and ever since I watched the old G1 cartoon as a kid, Soundwave has been my favorite. Part of the appeal was his appearance. With a head that epitomizes the Decepticon symbol, Soundwave always looked the most robotic with his lack of facial features. Add to that his dark blue and silver color scheme and you’ve got one snazzy bot. But looks were only half of the appeal. With his emotionless voice and fierce loyalty to Megatron, Soundwave could be one cold bastard. And let’s not forget his personal army of cassettes. What’s not to love about this guy? 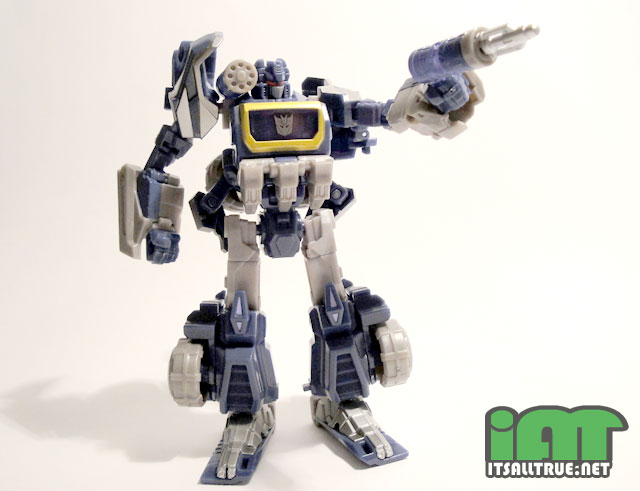 When Hasbro released images for this new version of Soundwave, I knew I’d have to snag him. I just didn’t realize how hard he would be to find. I’m not exactly sure what the case ratio is, (one of you Transformers fans will have to let me know), but he isn’t a common figure. I had to wade through months of Optimus and Bumblebee before finding mine. Even saw a few Megatrons. Luckily our Toys R Us got a brand new case in, jus t before Thanksgiving. 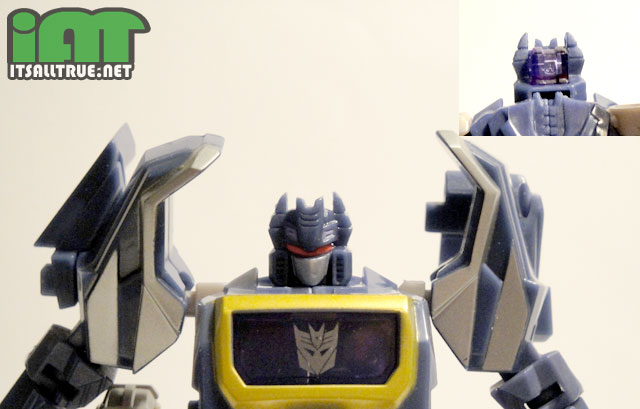 Soundwave’s robot mode is near perfection in my opinion. His head is a great modernized rendition of the G1 look, but with a more sinister look. Just look at those eyes and tell me he isn’t plotting something. Speaking of eyes, there is one problem I have with them. This figure was made for light-piping. There’s even a translucent purple piece on the back of his head. But for some reason they painted over his eyes with red. I’m assuming they did this because there would be too much dark blues/purples going on, but then why didn’t they just make the translucent part red in the first place? It’s always disappointing to see a perfectly good gimmick thrown away. If it wasn’t for that, this head would be perfect. 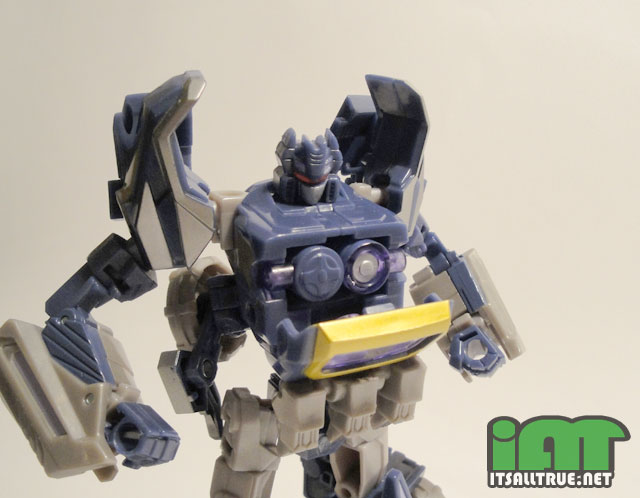 I was also really happy to see that even though Soundwave has a resemblance to his G1 counterpart, he’s way more than a giant box with arms and legs. His torso tapers as it goes down, giving him a more natural humanoid shape. The center of his chest opens up, just like a cassette player, to reveal his gun compartment. A really cool idea, I just wish there were a Laserbeak to go in there. I was also pleasantly surprised by his overall pointyness. Especially those huge shoulder spikes that make his whole body look like a Decepticon symbol. 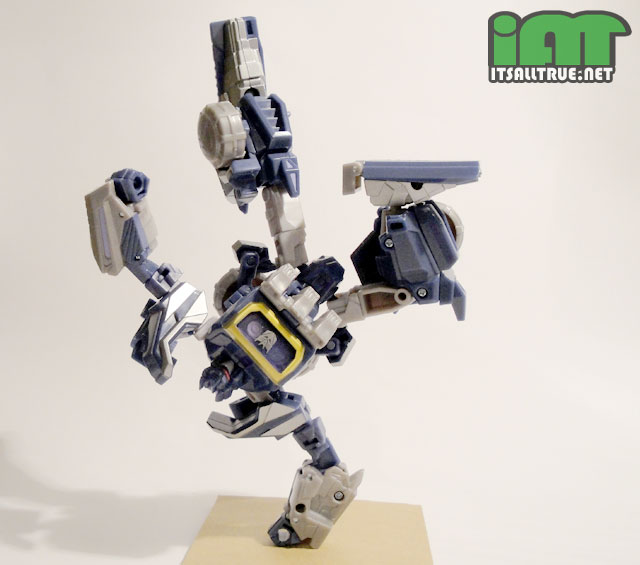 One reason I’m buying more Transformers is not only for the dynamic new looks, but also the Marvel Legends-esque articulation. Soundwave’s go ball jointed shoulders, hips and ankles. His elbows and knees are hinges. While his neck, biceps, wrists, and thighs are swivels. This gives him a huge range of movement, allowing him to expand his repertoire beyond DJ of Destruction. Now Soundwave can bust a move while bustin’ a groove. What else would those giant robot Hip-Hop sneakers be for? Continue to Page Two….