This year, I’ve only had the opportunity to review two C&Cs – Darkseid in March & Trigon in July. That’s it for the whole year. But, after some serious delays, waves 15 and 14 have finally hit store shelves (virtually on top of each other). So this review has a double dose of C&Cs today: Validus & the Ultra-Humanite.

If you read my Tyr review, then you already know that I’m not the most well-versed when it comes to Legion of Super-Heroes characters. They weren’t really featured in the reprint material of my youth and since I’ve been reading comics as an adult, I tend to stay away because they get screwed with a lot. Validus is a good example of that. If we want to say that this Validus figures represents the Pre-Zero Hour version, then he has an interesting back story. If it’s the Post-Zero Hour version, then not so much. 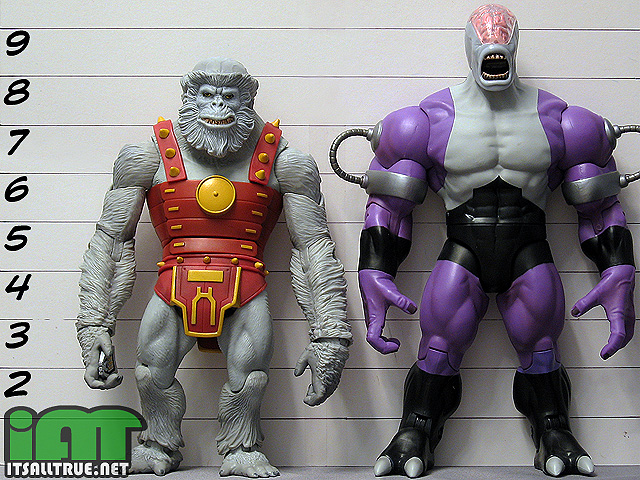 Validus was created by Jim Shooter in 1967. His purpose? He needed someone in the story stronger than Superboy. That’s it. His origin is even given as unknown so it could be glossed over quickly. But through the years, Validus was given a rather fanciful history. When the Legion defeated Darkseid in The Great Darkness Saga one of his long-term plans for revenge (Darkseid knows how to hold grudges) resulted in the creation of Validus. See, sometime in the Legion’s future, Lightning Lad & Saturn Girl would give birth to twin boys. Darkseid, still sore from his prior defeat, kidnapped one of the children and after mutating him into that handsome purple fellow in the picture below, sent him back in time to be a Legion villain. That’ll screw you up. This Validus was incredibly strong, near invulnerable, and capable of emanating “mental lightning” (a combination of his parent’s powers) from his brain. The only side effect was that he was rather mindless, emotionally stunted, and easily manipulated. After Zero Hour, that all was pretty much mopped up, tossed, and Validus went back to just being that simple-minded, really strong guy with mental lightning that Shooter had created years before. 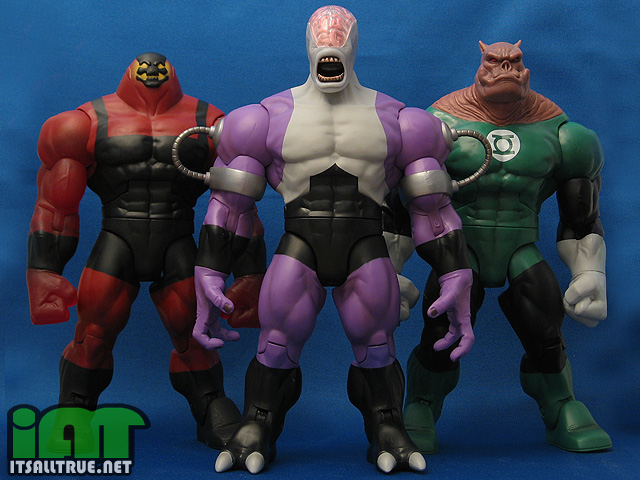 The first thing you notice about Validus is that we’ve seen most of this figure before. I have to admit; I always feel a bit cheated when a C&C has a lot of recycled parts, but Validus utilizes this body much better than his two pre-paints. He’s the first of the three where the left hip doesn’t give me problems and he can stand up straighter than the others. Second, he’s got a few more unique pieces – his feet & hands, biceps & shoulders, the torso, and his head. I love all the new pieces; I know it’s not possible, but I feel like this buck was made for Validus and then shoehorned into reuse for the other two. He’s that well done.

The only complaint I have on the sculpt is the size. It’s a moot point for me because we all know the size limit imposed by the packaging (but those 2011 packages are inspiringly larger) and Validus is very near to the limit. In reality, he should be at least 15″ to be in-scale with the line though he’s been depicted as even larger than that as well. Ironically, if there were a 1:18 Legion this figure would look great with them. 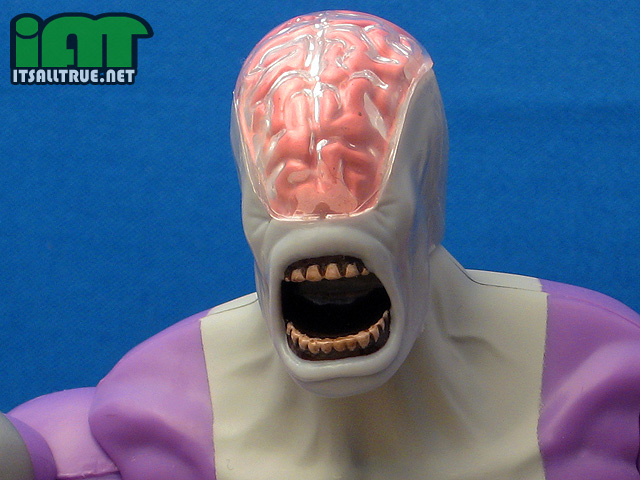 My favorite part of the figure in the head sculpt. If you’ve ever seen a picture of Validus, I doubt it was one where his mouth was closed, so this look was really the only way to go. The Four Horsemen even one upped most of his appearances because he’s not always drawn as ferocious as he should be, being an angry mindless beast and all. The 4H have given him this great Alien vibe and it’s the best I’ve seen Validus look.

His see-through skull is captured here with the brain matter molded and painted on the head with a clear shell glued over it. It really looks great, but I am curious to see how it would’ve turned out if the brain matter wasn’t molded in relief on the underside of the shell. This may have had to have been done for “logistics” and it does still look good, but I’m wondering if there could have been some way to portray his mental lightning as etchings on the undersize instead of simply matching the grooves in his brain. 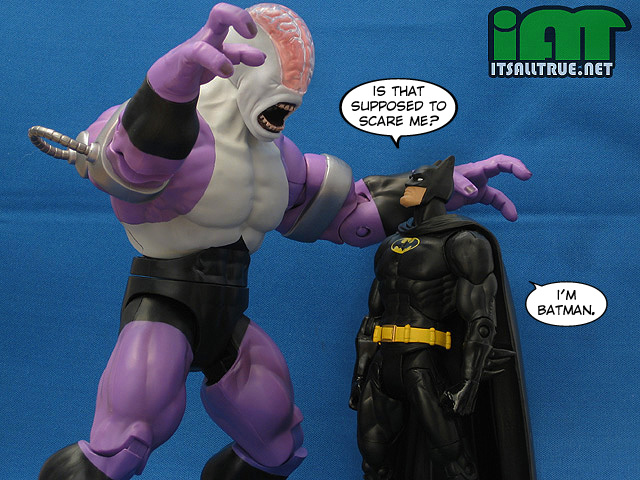 For a figure missing thigh cuts (another sad truth about this “universal” buck), I’m still going to call him well-articulated and surprisingly stable. Validus has ball-joints at the head and shoulders, the Mattel hips, hinges at the elbows, knees, and ankles, swivels at the bicep (limited), wrists, and waist, and rocker ankles. All of which work great. Right now, he’s on my desk, balanced on one foot and rearing back to throw a little 1:12 pineapple at the Ultra-Humanite who is holding Alan Scott upside down (I love my job). He’s perfectly balanced on that back foot and the pose successfully captures a pitcher coming out of a windup. I probably should take another picture of it for the review.

I also want to talk a little bit about the head in particular. When I got this wave in, I opened Martian Manhunter first. On my first look at the Validus head, I noticed that base of the skull was sculpted flat and I was expecting limited range because of it. I was wrong. There’s no tilt, but there is plenty of up and down range and it really helps sell the poses you’ll be putting him in. 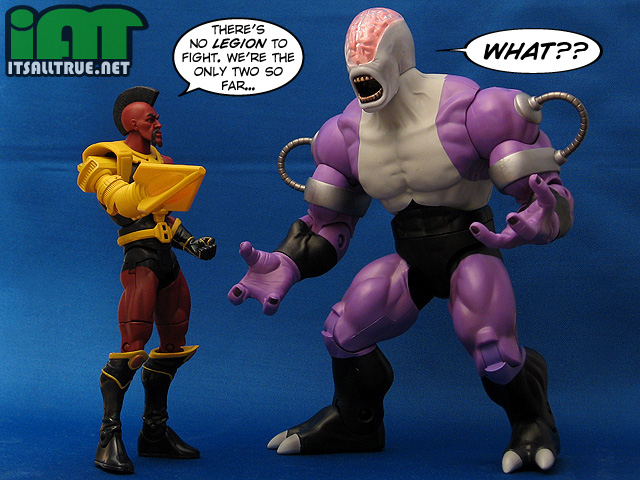 The paintwork was mostly well done. The only problems I had were with the white paint on the torso and the pink paint on the brain. In both cases, the issue is more about the production process then anything. The white paint is simply unforgiving, easily showing any scuff marks, dents, and dings the figures might have received while being packaged and shipped. And the paint on the brain wasn’t fully allowed to dry before the shell was applied leaving a few wet areas to transfer onto the clear shell. These are both minor issues and the majority of the figure is crisp with clean apps. Continue to the Ultra-Humanite…