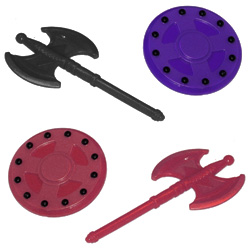 MOTUClassics.Com: First, thanks for giving collectors the full complement of He-Man accessories in Faker colors! Looking ahead, has Mattel put any focus on producing more axes and shields to match the various swords already released with figures like Wun-Dar & Prince Adam?

This would certainly be a good addition to future Weapons Paks, but nothing to confirm right now. Great suggestion!

MOTUClassics.Com: Will Mattel give any additional back stories to the Palace Guards besides naming Lt. Spector? Some fans of the bios would like to see the individual guards get their proper due in the Classics mythos.

Right now we don’t have plans to do so. The idea was for the Guards to be a bit more generic, allowing fans to make up their own adventures. In time we may explore more detail in the future if enough fans demand this! 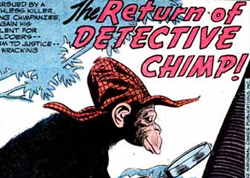 DCClassics.Com: Last December 1st, we asked about the inclusion of pet/animal characters like Krypto, Streaky, Ace, Rex, and Detective Chimp. Seeing that 3pk of smaller characters in the Green Lantern line has us even more ready to get these characters in DCUC. Are similar packs planned for the main line anytime soon?

We are looking into a few ideas. Nothing to announce yet, but it is something we are working on.

ItsAllTrue.Net: When will we see the Retro Action Ghostbusters hit store shelves?

DCClassics.Com: It’s getting near to be the end of the year and we’d be remiss if we didn’t ask about the Golden Age Hawks 2pk. Many JSA fans keep hoping the next announcement will include those two characters one way or another. Is any significance given to those characters since they were announced and never released?

For the record, these figures were never announced. They were on an early list of figures proposed to retailers to gage interest. Not enough retailers were interested so it never went past words on paper. This was not a set Mattel ever announced, which is why it is unfortunate when retailer lists are leaked. It often sets expectations that will not be fulfilled. Fans should only accept offical announcements from Mattel, not leaked retailer lists.

Editor’s Note: Toy Guru made an (un?)official announcement on the AFI Boards about the Hawks 2pk here in response to the retailers listing the 2pks back in Dec 2008. While he didn’t characterize the release of the names as leaks in that post, this answer seems to indicate that the online retailers were being asked to gauge fan interest without naming the 2pks.

Also of note, in SDComics SDCC SDCC 2010 coverage at Critical Mess, Four Horsemen Eric “Cornboy” Mayse had this to say about the figures in the Hawk 2pk… 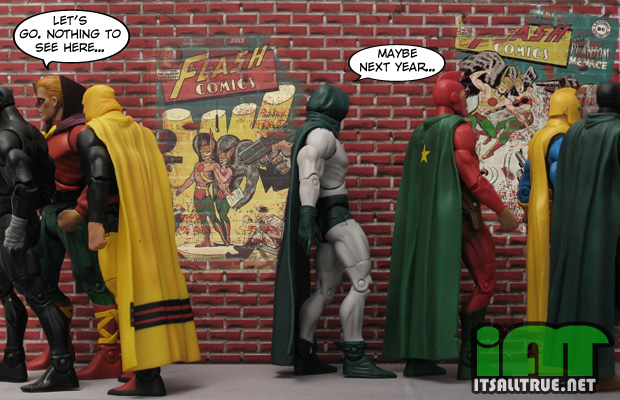