The Ultra-Humanite might be the ultimate coulda been in comics history. He’s widely credited as the first supervillain. And he’s the original of arch-enemy of Superman, debuting in Action Comics #13, nearly full year ahead of Lex Luthor. In his earliest appearances, he was a bald mad scientist who was in failing health and bent on world domination. He would be presumed dead in those early appearances only to return a few months later, his brain now placed in the body of Dolores Winters, a beautiful actress (kinda creepy for a 40s comic, huh?). His appearances as Winters were brief because he was dropped in favor of Luthor soon after, but this added bit about brain swaps did set him up for his eventual return to continuity as a Justice Society villain decades later. 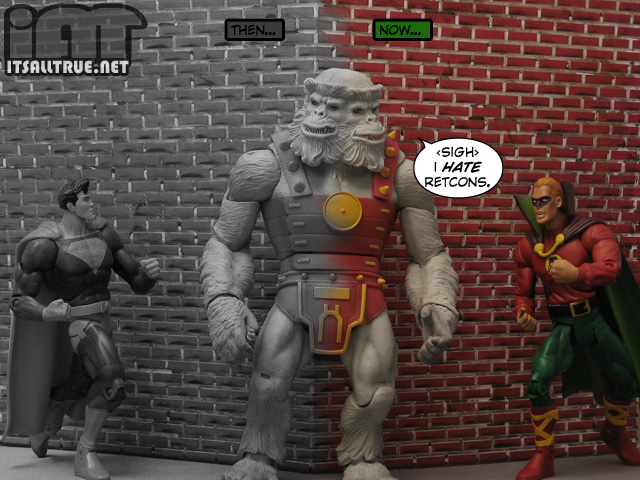 Ultra-Humanite went unused for over forty years after Luthor took his spotlight. It was E. Nelson Bridwell (a well-known treasure trove of comics trivia and continuity hound) brought the character back, still in Dolores Winters body, in the Superman Family title in the early 80s* The following year, during one of the JLA/JSA team-ups, the Ultra-Humanite had his brain transferred into the albino ape body this figure is based on. After Crisis his last bit of status as a Superman villain is stripped away as his origin is left in the 40s and made into a JSA villain. He would go on to have a few appearances throughout the 80s, but he’s been mostly underused since then. That’s a far fall from Superman’s first arch-nemesis.

* – In that first 80s story, UH attempted to kidnap Bruce Wayne as his next body. You might think that was a mistake and you’d be right – Lois Lane totally stepped in and saved the day. 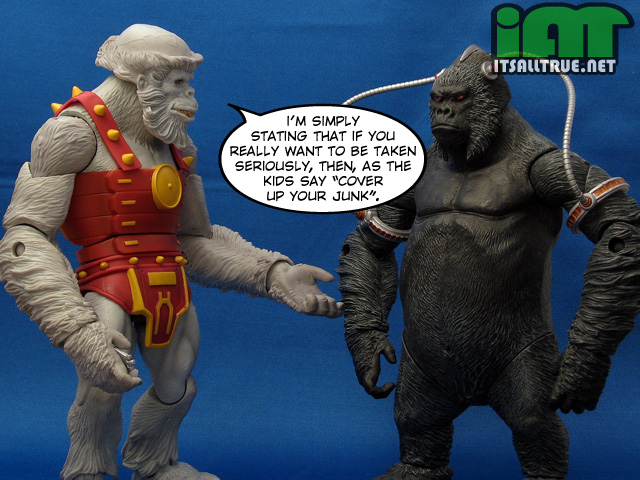 The figure is a great depiction of the character. The sculpt does reuse Grodd’s arms, but they work great in concert with the all-new body. The uncovered parts of the figure are sculpted to match the arms and are sufficiently upright-apelike (if there is such a thing). The costume is also well recreated, but I find that I have to keep his ab crunch moved fully forward to be happy with his look. I’m glad that the articulation point is there and it’s well disguised, but it looks too mechanical when the figure’s torso is pulled back. The legs tend to push the figure into a crouched position, so this preference does tend to work out naturally.

The head is sculpted well with a nice sneer to it, but the paint on the eyes leaves him looking a little drunk or disinterested. The shaved cranium and veins in the scalp sell his trademark look, but it’s a bit marred by the mold lines. I’m not one to usually complain about that, but these are ill-placed with one seam running straight through the top of his head and another one visible in the fur across his brow. 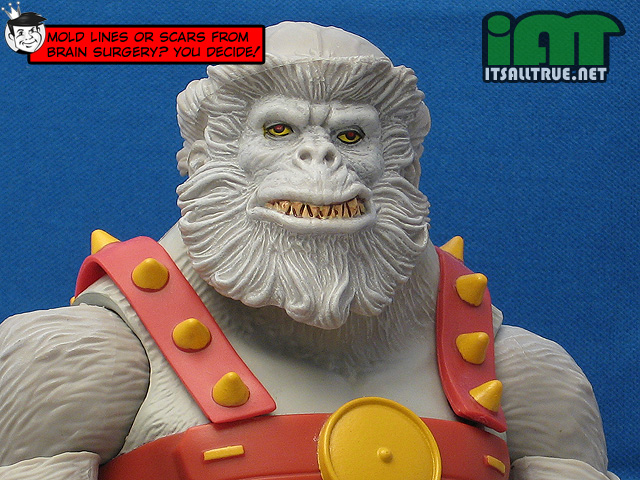 I had no issues with the paint work on UH. The highlights on the fur help bring out the sculpt rather nicely and the uniform is created with very little paint work.

The articulation isn’t as fluid as Validus’, but UH is better articulated on paper. He features ball joints on his head, shoulders, hips, wrists, and ankles, hinges on his elbows and knees, swivels on his bicep and waist, and the aforementioned ab crunch. All this articulation sounds great and most of it is, but I had trouble getting him into some poses for this shoot because the joints were tighter than normal. That’s not necessarily a bad thing, of course, and it did enable him to hold up Alan Scott for the picture below. 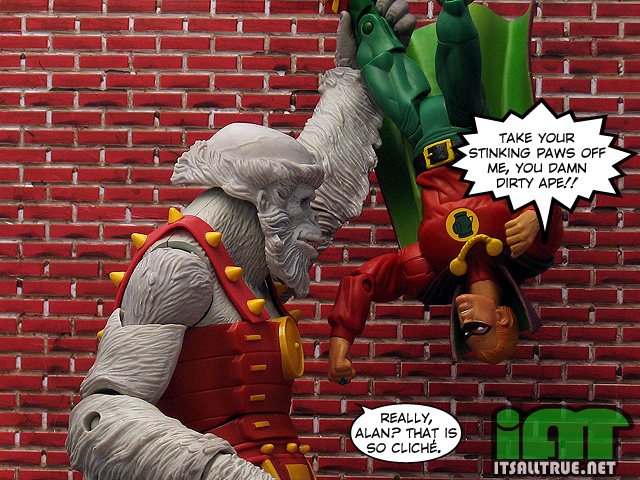 UH did include an accessory. Knowing the Horsemen, it surely has a basis from something in the comics, but I’m not immediately aware of it. It is sized to perfectly fit in his hand and is painted particularly well despite the small details. Even though I’m not sure what it is, accessories are always welcome in this line.

Overall, these are two nicer C&Cs in a field of good C&Cs. Ultra-Humanite has all the details right and looks like the figure walked off the page. He passes on all the technical details and it’s just kinda crazy to have a comic-accurate Ultra-Humanite figure. I’d like him more, but he’s a bit overshadowed by Validus in this review. Validus is similar – with a great sculpt (overlooking the reuse) and paint details, but Validus also captures this other intangible quality. I can’t quite describe it, but, in hand, he just becomes this great toy. If I were a kid, I could see busting out the Joe’s and using him as some new Cobra monster, or having him go rounds with Hellboy, or fight the Ghostbusters. He’s just fun. And, after that fun, he’s still an important villain for one the DCUC’s most storied teams. I do wish he were bigger, but he’s still one of my favorite C&Cs and that’s saying a lot because he’s far from my favorite character in the comics. 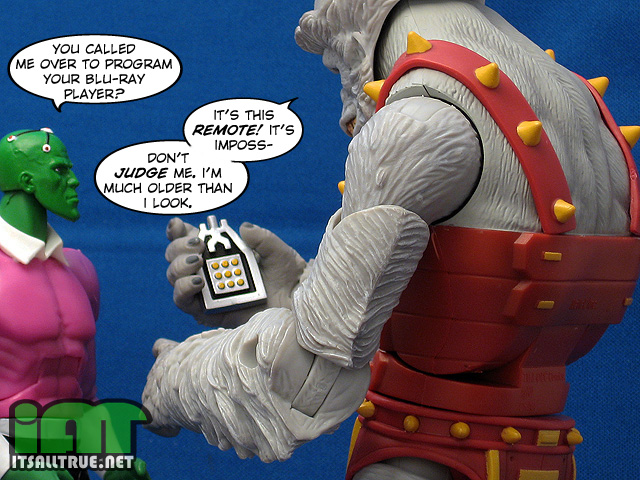