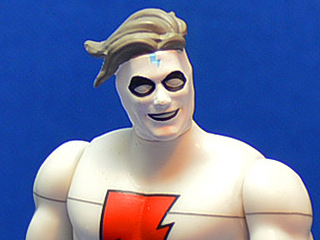 Nostalgia is a funny & powerful thing. Culturally, there’s a push forward, for innovation, for betterment and it impacts everything. Nostalgia rears its head in our little culture corner, the action figure world, by as an onslaught of bigger & more complicated versions of the same toys we played with a quarter-of-the-century ago. There are more-detailed sculpts, there’s increased articulation, there are sharper paint applications. And we seem to gobble these up with abandon.

But nostalgia isn’t done with us. Nostalgia goes both ways for a lot of us. While I gobble up MP Transformers, DC Classics, & Marvel Legends, I still keep & display my G1 Transformers, my Super Powers, & my Marvel Secret Wars. I just can’t quit those old toys. There’s an inherent charm to them, to their limited articulation, their sorta-detailed paintwork, and their weird, and sometimes unhelpful, pre-posing. It’s that charm, working with nostalgia, that turns those things into something worth replicating. It creates a market for throwback articulation & sculpts to go right alongside our hyper-articulated modern toys.

Fresh Monkey Fiction is one of many companies taking advantage of that nostalgia boon right now and they did it in a unique way, taking inspiration from Mattel’s Secret Wars toy line. The figures use a buck body that captures the soft musculature and bent knees of those vintage figures. Newer ‘kids’ might scoff at this look and say, “you had to be there”, but I’d assure them that had they been there, receiving the IAT newsletter, they would’ve been reading about how awesome, and unfortunately abbreviated, that toy line was. Have no doubt.

When FMF offered to send over some review samples of their new nostalgia toys, the 10-figure strong Amazing Heroes line, I took them up on the offer to see if they were able to capture that Secret Wars charm. After playing around with them for a few days and taking pictures to share, I can say that not only did they capture that old charm, they’ve worked in some of that innovation too with some great head sculpts and sharper paint.

And then there’s the packaging. Normally, packaging is destined for the garbage bin, but Amazing Heroes earns a reprieve thanks to a few key points. Firstly, they are resealable, the figures can be removed and returned without tearing up the packaging. Better still, the cardback designs are vintage-inspired and feel like something in-line with the era. What really surprised me, was the alternate cardbacks. The standard design features eight figures in thumbnail, but the alternates include a set of modern art and a set of “golden age” art. The golden age art hit me hard. I included a picture of the Captain Action one above – there’s just something about having that vintage artwork, large & in charge, right next to the figure that really sings to my own sense of nostalgia.

The figures FMF included in their sample package were from Series 1: Black Terror, Daredevil (no, not that one), Captain Action, Stardust, Green Turtle, & Blank Slate, and Series 1.5: Champion of Mars, Silver Streak, Madman, & John Aman Amazing Man. Many of these characters are older golden age characters that have fallen into public domain (Madman, Captain Action, & John Aman Amazing Man are licensed). Many of these characters I knew and was familiar with, but it’s been cool to rea up on a few of these guys that I really had no idea bout before. Continue to Page 2…