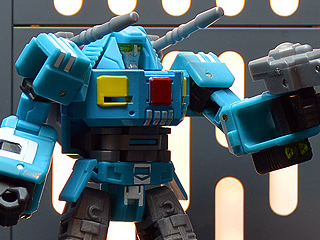 Before I dig into this review, I should clarify that I don’t feel like “I’m back”. Each time I get the time to post a review, many of you post your encouragement and gratitude that I’m posting again – I love you guys and I appreciate that. Not a day goes by that I don’t think about you readers and IAT. I just don’t have the time I used to have – and I don’t know that if toy blogging is the best use of the time I do have… I’ve got a whole Truetorial about it. I should get that posted sometime too. Until then, let’s dig into Tank… I mean, Battle Robo.

I’m not starting new lines. I’m not. As part of my 2016 reevaluation, I recognized that I spend too much on toys and the first way too slow things down was to vow not to buy into new toy lines. When Machine Robo debuted, I tried to write it off under that ban, but I’m weak. I loved the Gobots I had as a kid. There was no snooty competition between them and my Transformers. Scooter. Turbo. Black Cy-Kill. They all just merged right in. And now, 30 years later, I’m just going to treat them the same. These are MP Gobots. I’m not gonna fight with myself.

Granted when I call these MP Gobots, these are not based on the toy line. The toy line is a licensing nightmare. I may have this wrong, but Tonka licensed the toys from Bandai and then gave them original names and characters. The molds then belong to Bandai, while the names and characters belonged to Tonka (and were later acquired by Hasbro, leaving some names used as Transformers). So a GoBots revival would just take a lot of cooperation and profit sharing between companies that don’t share.

Action Toys though, they have this figured out. They licensed toys based on the anime Machine Robo: Revenge of Cronos. This means the toys won’t be exactly like you remember, but they’re close enough unless you’re a stickler. In Battle Robo’s case, the most notable difference is the color. The imported Battle Robo was a very dark blue tank named Tank. The color is the last of my concern, so it’s noted, and we can jump in to the figure.

The sculpt is excellent. As a fan of the toys, I don’t have a lot of memories of the cartoon and I can’t say that the sculpt is accurate. The level of detail seems amped up from what might’ve been in an 80s cartoon, but I can’t say if they took liberties or not. I love it though. He looks sharp. One thing I did have to get used to is the height. Takara went BIG for their Masterpiece line. While I think Action Toys matched the quality of an MP with Battle Robo, they did not go as big. While I wish they were bigger, it really makes sense. Gobots were almost always smaller than their TF counterparts. If you don’t want these guys to look way smaller, these updated versions can hang out with any of the MP Minicars Takara makes (which is currently Bumblebee, Red Bumblebee, & Gold Bumblebee). The important thing is that Action Toys seems to be making the robot modes to scale with one another, again based on the cartoon, and internal scale if far more important than any imaginary TF mash-up. Continue to Page 2…