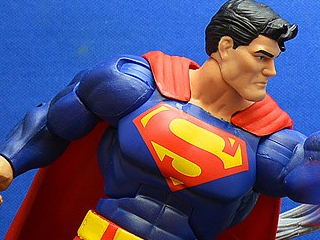 I took last week off of work to get caught up some things around the house, get a few more reviews up on the site, and to send a little more time with Sam. Things were getting busy at work lately and I was missing the little guy. Well, it’s late Sunday night and I have to be back at work in the morning. I didn’t really get much done around the house and I’m working on this review at the eleventh hour. That’d be strike one and two, but Sam & I had a great week so I’m not too broken up about it!

In the interest of still trying to get a theme week up for this week, I decided to go really broad, lots of wiggle room with “superheroes”, and start off with a figure I thoroughly enjoy. It’s rare in toy collecting that you can want something really, really of the wall… and then get it. But that’s exactly what happened here.

A lifetime ago, Mattel teamed up their popular MOTU Classics line with their DC Classics line and made a handful of Toys R Us exclusive two-packs. The highlight of those was another “off the wall” request, Battle Armor Faker. Sometimes, I feel like Mattel made him just for me. If there was something lackluster about those two-packs though, it was every single DCUC figure. The MOTUC side had merit – Stratos with reversed color gear, Zodac with gloves, etc. It was a great way to get out some oddball differences. The DC side though, sucked. There’s really no pulling punches on it. The same Superman that was released multiple times. The third release of the exact same Lex Luthor. So on & so forth. Whether red tape or short-sightedness, Mattel missed an opportunity to package up some DC characters on MOTU Classics bucks (or even vice versa) and give us something really special. When asked about it, Mattel more or less said it couldn’t be done.

Three years later, “couldn’t” turned into *boom* and we got an amazing MOTUC-sized Dark Knight Rises Batman in the Unlimited line. I love that figure, but just as I was getting ready to hope for some more, the DC side of things went kaput. Hope was lost.

Luckily, Mattel turned their Multiverse line to 6” so we can keep getting a trickle of new figures and then doubled down with a Walmart exclusive wave of Dark Knight Returns figures just in time for the 30th Anniversary! And lo & behold, there as finally a MOTU Classics Style Superman! Rejoice!

Man, was that enough backstory? Geez. So this figure is more or less exactly what I wanted. You’ve got that chunky MOTUC goodness and all the right new parts to get the figure done right like the undies and the boots. Now, I don’t know if we’re still trying to claim he’s original parts, just shares parts with Batman, or is using MOTUC parts – Mattel claimed the earlier Batman only used a few pieces like the shoulders, but the sculpt rocks. This is the exact Superman I want hanging out on Eternia… er, I mean my MOTUC shelves. Continue to Page 2…