It’s been months since we wrapped up DCUC13, DCUC14 is still MIA, but DCUC15 has is starting to trickle in. Weird time to be a DCUC collector. Now, it’s been a couple weeks since my last review and I’m a little out of practice. Please bear with me as we look at Martian Manhunter & his variant.

To recap, there’s been some sort of delay with the Walmart exclusive DC Universe Classics 14. Mattel is appropriately quiet on the delay and DCUC15 has arrived first. It makes me wonder if this is still DCUC15… 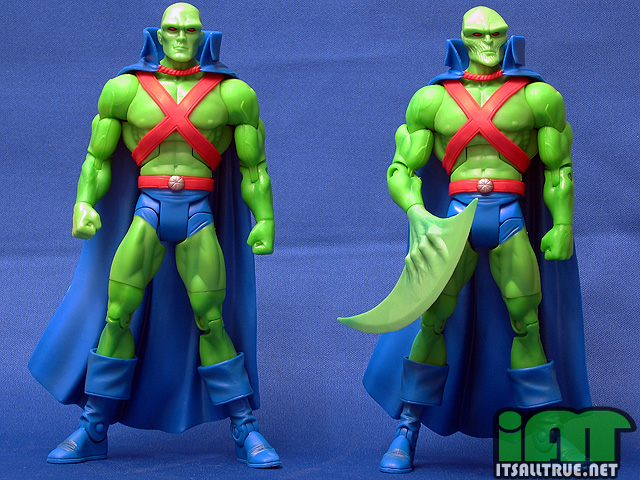 J’Onn J’Onnz is a cornerstone of the DC Universe… kinda. He first appeared in 1955’s Detective Comics #225 and was featured there as a backup or in his own stories in House of Mystery, though he’s most known for his Justice League tenure in the 1960s (before leaving to return to his people on Mars) and again for his JLA tenure since Crisis. Since he can sometimes go for years at a time without use, key elements of his back story tend to get shifted around. He used to be simply displaced from Mars waiting for his people to retrieve him, but he is now the last survivor of the doomed race. Sometimes he was teleported here as a contemporary to his generation of heroes, other times (and my preference) he was transported here in the 1950s and operated as different heroes over the years, including the Bronze Wraith in the 1960s (yes, I want a Bronze Wraith figure… and an Acro-Bat too…), until going public after the appearance of Superman.

J’Onn’s powers typically rival, but fall slightly short of, Superman’s – he used to be the Superman fill-in for JLA stories. This includes superstrength, flight, invulnerability, and “Martian” vision (similar to heat vision). He can also shapeshift, become intangible/invisible, and is a powerful telepath. I always liked Martian Manhunter as a kid because he was like Superman in his hero guise while in his ‘secret identity’ he was a police detective John Jones, a man as skilled and capable as Batman. He’s one stop shopping for all your superhero needs. Anyway, I could gush about Martian Manhunter all day, so we’ll just move along to the review. As you can imagine, this one was a highly anticipated figure for me. 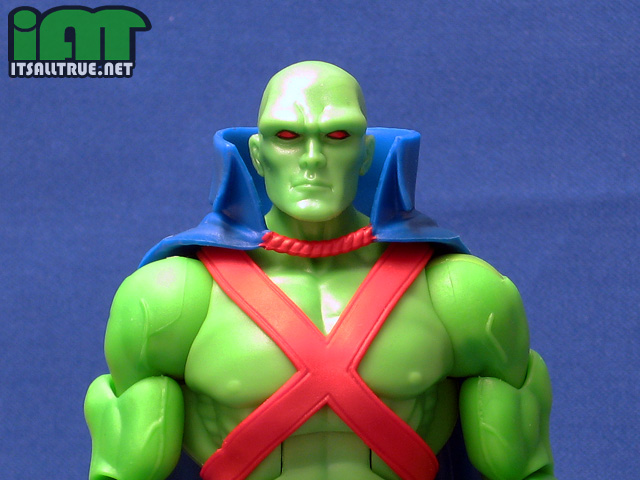 I’ve been looking at Martian Manhunter over the last few days trying to determine what’s new and what’s reused and I’m still not sure. The upper torso appears to come from Hawkman and I expected the arms too as well, but the vein pattern is different. The vein pattern is important because your J’Onn might not have it. There’s been some serious quality issues with this wave (more on that later) and many J’Onn’s are being found with incorrect biceps (smaller, no vein pattern) on one or both of the arms. Both of my J’Onn’s have the correct biceps, but my Jemm wasn’t as lucky, and sports a weaker right arm. 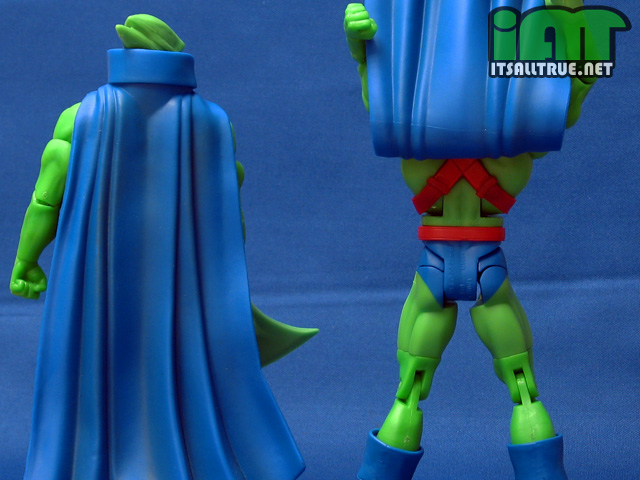 Some parts are clearly new like the cape, belt, harness, boots, and head. The new parts are all sculpted well and look good on the figure, but I keep looking at the chest harness and thinking it’s been misapplied. It looks okay, but it also appears to be slightly askew. I’ve been tinkering with the idea of pulling it off and seeing if it would fit better if turned 90 degrees one way or the other.

The cape is made of a very pliable plastic. It’s much lighter and doesn’t restrict the articulation. I like it, but I have to cross my fingers and hope I don’t find it coated in white plastic in a few months. 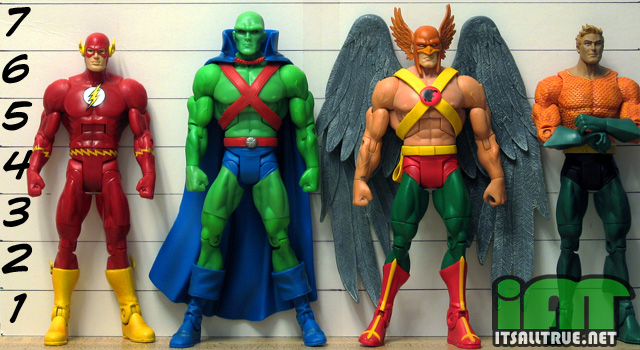 J’Onn is appropriately scaled to reflect his 6′ 6″ or so height in the comics. This is something I’m glad to see Mattel doing. I don’t mind the buck system, but there are plenty of tricks for adding or removing height from figures while using the same base body (Minimates has been doing it for years). J’Onn just wouldn’t be right if he were eye level with his comrades and I’m glad to have him be the big guy no matter which JLA team I display him with. The only downside is that figure’s added height comes entirely from his new calf pieces and his legs look a bit elongated because of it.

There is very little paint to be found on J’Onn – nearly everything is molded in the appropriate color. The red band on his cape, the belt buckle, his upper thighs, his eyes, and a little bit of wash on the cape are the only paint apps on this figure. It really works for the most part, but it does leave J’Onn looking a bit more plastic-y than other figures and, along with the grade of plastic used, a little more difficult to photograph. And oddly, his right hand is a slightly different shade of green than the rest of the figure. It’s hard to tell from my pics, other than that piece reflecting more glare than his arm. Click here for a look at J’Onn’s variant.