The Creature is also impressive in the sculpting category. His eyebrows and gills sit over the Minimates head like a hair piece. The gills are sculpted going all the way back and have tiny hatch marks running along their edges. The Creature has an all new chest piece that sits over the regular Minimates chest. The abs are large and armored while there are little groups of textured scales in various places. The back of the chest piece has a large fin running down the center. His hands have sculpted claws with webbing running between them, while his palms are textured with tiny pads. His arm fins are part of his hands, but stick close to the forearms to appear attached. Lastly, his feet also have little sculpted webbing between the toes, and there’s two tendrils running up the back of his calves. 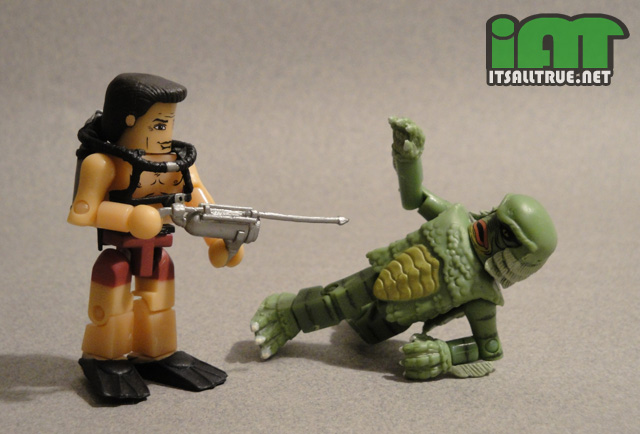 The Creature comes with Dr. Reed, the hero of the movie. The Good Doctor isn’t wearing much, but he has a few accessories. His scuba tank and belt are removable. He comes with these great flipper feet, but not normal feet. So he’s going to have to duck-walk his way into battle. Also, he has an extra hair piece with swim goggles attached. The strange thing with that is they painted his eyes onto the goggles, and it looks a little odd. Dr. Reed also comes with a spear gun that he has some difficulty holding in a natural pose. 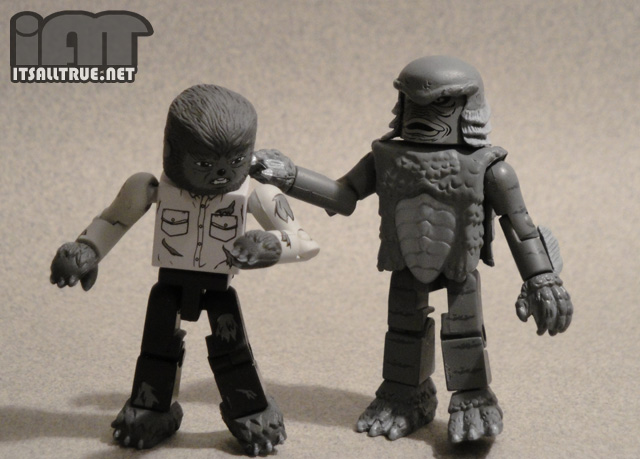 The Black and White set is a Toy’s R Us exclusive, so it could be more difficult to find then the others. Their bodies are no different. The paint schemes are also the same, just done with muted grays and blacks. The Wolf Man even comes with the same cane. But where Larry’s was glossy black with shiny silver, the B&W one is matte black and dull silver. These two figures aren’t necessary to complete your monsters, but I really like them. There’s just something about that gray color that’s perfectly reminiscent of the way they were originally seen. 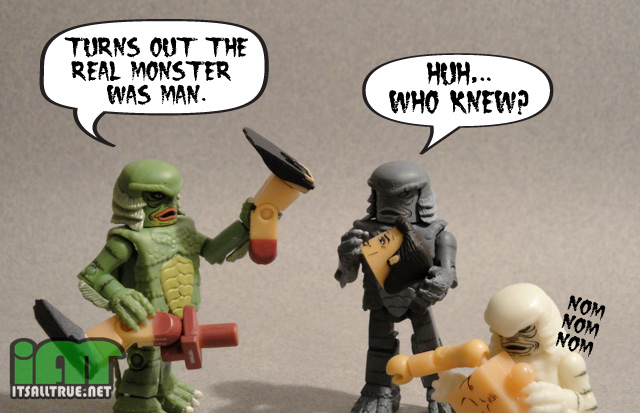 Even though these are great minimates, there have been reports of breakage issues, especially on the hip joints. My Dr. Reed was a victim of this, and now has no right leg. So be warned. Also, there are two four-packs coming out soon to Diamond retailers. The Black & White figures are not included, but they will have all the other figures plus two exclusives: Dr. Reed’s girlfriend, Kay Lawrence, and Larry’s girlfriend, Gwen Conliffe.

These will run you about $8 at TRU, which is average for a Minimates two-pack. Personally, I can’t wait to get Dracula, Frankenstein, and the rest of these little guys. Mini Monster Squad here we go!