I’m a big fan of the classic Universal Monsters. Whether it was playing Castlevania, or watching great movies like The Monster Squad; I couldn’t get enough of Dracula, Frankenstein, Wolf Man, the Mummy, or the Gill-Man. So when Art Asylum announced them as Minimates, they could’ve just sent me a bill.

One of the things that always bothered me about the monsters, is that there was never one definitive toy line for them. One line would have a variety of characters, but poor sculpt or awful articulation. Another line may have great articulation, but only one or two of the characters were made. The one line to come the closest also came out of nowhere. In 2006, Toy Island surprised collectors with a wave of the five main monsters. With articulation and price akin to Marvel Legends, but sculpts and paint that were only decent; these figures seemed to be the best us modest-income Monster fans could hope for.

But it’s 2010 now and Diamond Select has decided to take a crack at the Universal license. Sure there are great looking figures coming, first of which will be the Gill-Man. But why stop there? Art Asylum’s joining in on the fun with a line of cute mini monsters. The first wave consists of four two-packs: The Creature from the Black Lagoon and Dr. Reed, the Wolf Man and Larry Talbot, Glow in the Dark Creature and Transformation Wolf Man, and Black and White Creature and Wolf Man. The Black and White set is a Toys R Us exclusive. 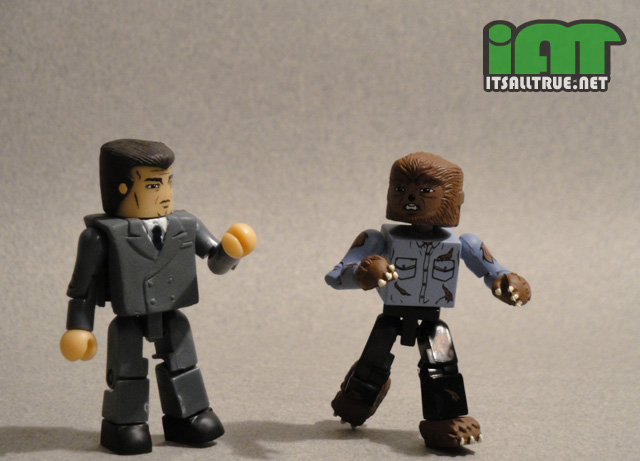 What I really appreciate about these figures is how well they take to this stylized look. Not only does the Wolf Man resemble his onscreen appearance, but the little Larry Talbot is a great caricature of Lon Chaney, Jr. The printing on the Wolf Man bodies are particularly nice – his arms, legs, and chest are ripped in various places to expose the fur underneath while his dog-like face has the classic under bite and predatory eyes. There are even wisps of hair printed on his forehead going into his hairline. The Transforming Wolf Man is equally impressive. With his white undershirt on, there are patches of skin poking out from beneath his fur. Also, if you look closely, you can see that even though his face is mostly wolf his eyebrows and eyes are still Larry’s. I didn’t even notice this detail right away, but I love it. 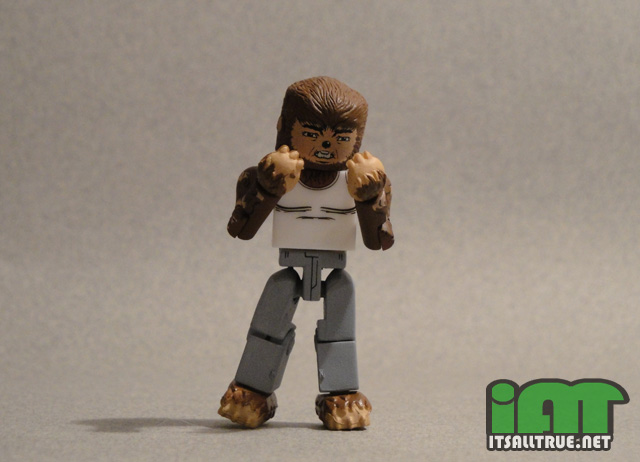 Since Larry gets the classic suit and tie treatment, his most notable item is the silver tipped cane. It’s a little large, but the wolf’s head at the top is incredibly detailed. It looks like a tiny movie prop.

The Wolfman has furry feet with tufts of hair coming off the tops while the bottoms are bare with claws. Speaking of claws, similar tufts flow from the wrists to about where the knuckles would be. The bare part is then topped off with his fingernails. The head piece is like a cap that sits over a regular Minimates head. Even though the face is smooth, the rest of it is nicely sculpted with hair flowing all the way back.

As much as I love Larry and the Wolf Men, the real prize in this set goes to the Creature. Molded a rich green color, his body is painted all over with highlights. His gills, fins, and even the inside of his palms are painted a murky green. Then there’s the great printing on his face, where his yellow eyes and red lips stick out from all those layered wrinkles. As an added detail, they even printed dark stripes along his arms and legs for the scaly effect. Continue to Page Two….