When Jean-Paul Valley was killed off back in 2003, I thought the mantle of Azrael had died with him. How little faith I had in the cyclical nature of comics. Not only was I wrong about there being a new Azrael, but I was equally surprised by the decision of DC Direct to cast his image in plastic.

Michael Lane was a Gotham Police Officer that was recruited into a special police program to replace Batman if anything were to happen to him. That program, run by the villainous Doctor Hurt, prepared Michael to be manipulated into a warped demonic version of Batman. During their last battle, Michael was presumed dead after the helicopter he and Doctor Hurt were escaping in crashed into the Gotham River. Although he survived, he was overcome with the guilt of the sins he had committed and sorrow over the loss of his family. He was recruited by the Order of Purity, an offshoot of the Order of St. Dumas, and given the cursed armor known as the Suit of Sorrows along with the Swords of Sin and Salvation. With these weapons, Michael punishes the wicked of Gotham as the new Azrael: Death’s Dark Knight. 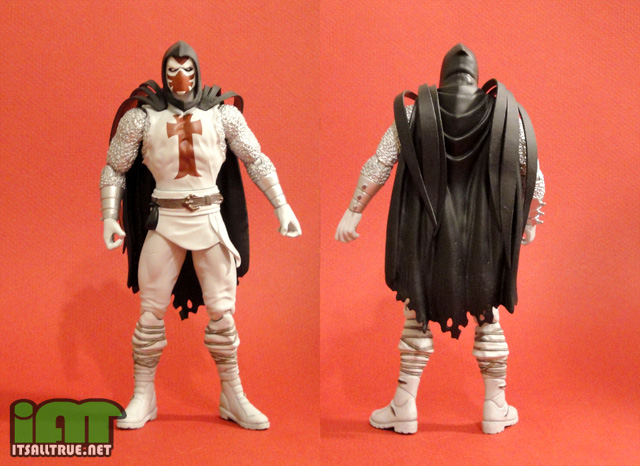 DC Direct tends to outshine DC Classics when it comes to unique sculpts and Azrael keeps with this trend. That sounds ridiculous to say considering DCUC is a Four Horsemen sculpted line I know. And the 4H do work miracles with Mattel’s budget constraints, but when you compare the mostly original and detailed bodies of DC Direct to Mattel’s generic Buck system, it’s easy for DC Direct to take this category. Azrael sports an all-new body with tons of detail work that makes the figure shine. I particularly appreciated the individual links in the chainmail, the texture and frayed edges of the tunic, and the sculpted ropes that wind around his boots. 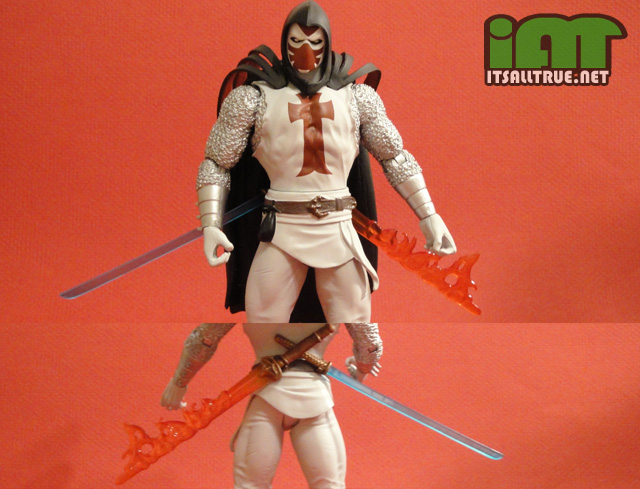 Azrael comes with a tiny round base (that’s pretty ineffective) and his two swords. The Sword of Sin is a classic knight’s sword, sculpted with flames emerging from the blade. It’s extremely detailed with a decorated hilt and scratches to show battle wear. The blade is colored in a translucent orange/red that fades to yellow. This gives a great impression and coupled with the sculpt is one of the best representations of fire I’ve seen on a toy. The Sword of Salvation is modeled after a Samurai’s weapon. It’s not as detailed as its sister, but there is a nice pattern on the handle. The blade is colored in a translucent icy blue, and looks almost ghostly. Each sword is made for a specific hand, but they can also be placed on small clips on the back of his belt. I’m all for DC Direct adding little details like this, but I would also like them to be practical. They look a little strange sticking out from behind him, especially when one’s on fire. 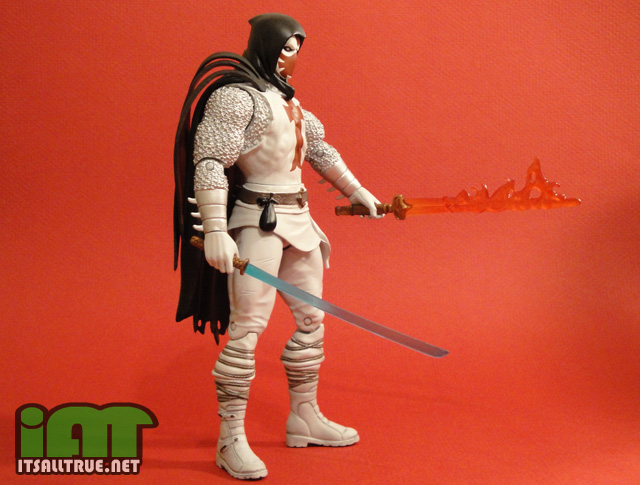 The paint job on this figure is simple but effective. He’s mostly molded in the grayish white of his costume which brings out the blood red cross on his chest and the markings on his face. The ropes and straps around his boots are nicely outlined with a thin black. The biggest problem is with his belt, where the paint doesn’t cover everything it should. This isn’t very noticeable though, unless you are inspecting the figure up close. One thing I really liked was the metallic silver used on the chainmail parts. Like the red, they help to offset the dull color of his costume. Something interesting I noticed was that even though his cape is all black, the inside of the tendrils coming off his shoulder are dark red. The company didn’t have to add that, but it’s a nice little touch to see. 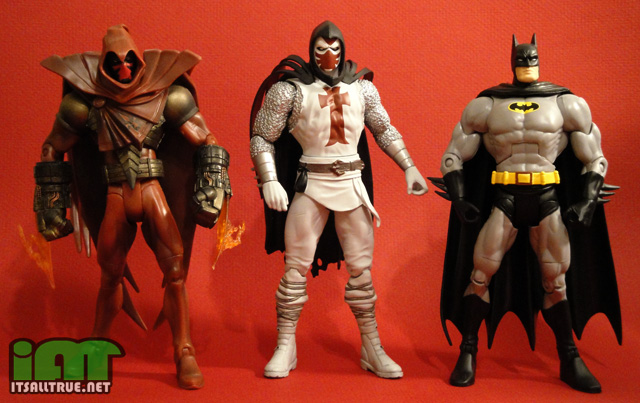 Az’s articulation is slightly better than your average DC Direct figure. He’s got a ball jointed head, which isn’t always a given with these figures. Although it should be. Its 2010, swivel neck joints should be illegal. Az’s shoulders are swivel/hinges, but are limited by the way the arms were sculpted. His elbows, hips, and knees are hinge joints. While there are swivel cuts to his wrists, waist, and boots. I was surprised to see the swivel waist, that doesn’t show up too often in DC Direct for some reason.

I don’t have much faith that Mattel will make this Azrael, so I’m really happy DC Direct made him. If you’re looking for action poses, then this isn’t the figure for you. But if you’re like me and just want a DC Universe that’s mostly in scale, then this figure might work. He’s a little bit taller than a DC Classics, but not too noticeable, especially in a large group. 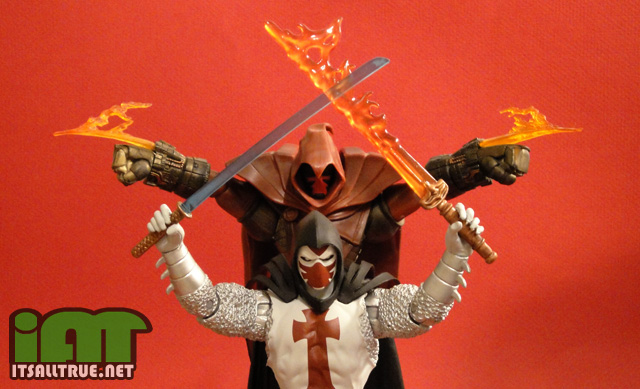