After the SDCC Rainbow Hal horror stories, I’d resolved that I wasn’t going to own this particular exclusive. It was okay because I only marginally wanted it. But early this month, I was pointed towards Graphitti Designs’ website, where it was in stock. You know the rest – marginal interest became solidified want.

This review contains slight spoilers for the DC Comics event Blackest Night. It ended nearly a half year ago, but if you’re saving it for a rainy day, consider yourself warned.

For SDCC 2009, DC Direct and Graphitti Designs offered up an interesting exclusive. 5 Hal Jordans wearing 5 different Corps uniforms. Each was sold on a different day and obtaining a whole set was evidently near impossible. Being… uh, not-the-biggest Hal Jordan fan, I thought they were neat, but didn’t feel the need to pick them up. This year, DC and Graphitti teamed up again on two more Blackest Night exclusives – a Black Lantern Hal Jordan and a White Sinestro. They were first offered at WonderCon, then again at SDCC. I’m not sure how the lines were to pick these guys up, but the eBay prices weren’t pretty, that’s for sure. Luckily for me, Graphitti Designs sold the remaining stock on their website and I was able to snag Sinestro at the intended price of $20. It looks like they’re still available at Graphitti as of this writing. 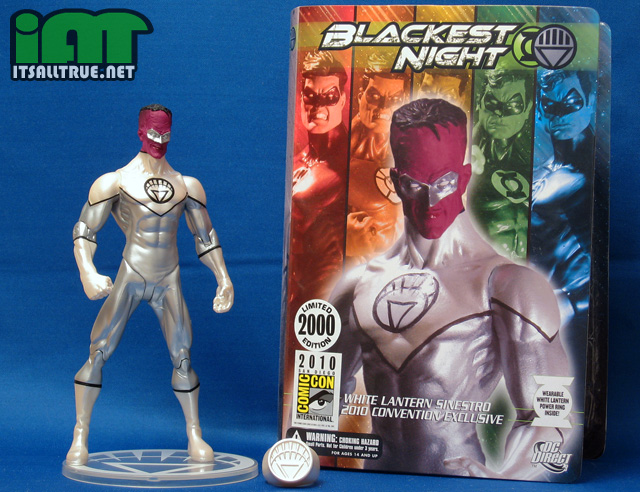 DC Direct’s SDCC exclusives come in this strange book packaging. It’s really a normal blister, just with the cardback extending to the left and folding around to cover the front. It’s kinda neat, but a little strange. One other weird little note on the packaging – the figure included a White Lantern ring that was packed in a cavity in the front of the bubble. While you have to open it normally to retrieve Sinestro, you have to remove a separate panel from the front to get the ring.

Sinestro’s sculpt is a borrowed one. I’m not entirely certain, but I think it was first used for the Benes JLA Hal in early 2009 (and then again for Hal, for John, for Kyle, for Sinestro and for Hal again – it’s got some mileage on it). It’s a decent sculpt, but it’s an odd choice for Sinestro because it makes him a little too beefy when placed with the other figures. Sinestro is supposed to be a lanky fellow. His head is sculpted to match this body, so, on-his-own, he does look pretty good.

The only new pieces are the head sculpt and gloves. The gloves are still the original Hal’s sculpt, but modified so that the ring (or the little white bump that’s supposed to be a ring) has migrated to his left hand for accuracy. This is amusing because while it’s accurate, his left hand is sculpted like he’s showing off his ring instead of wielding it. I do really like the head sculpt though. He’s got a funny little “I’m better than you” sneer that’s really appropriate for him. Of course, that gets wiped off his face about 27 seconds after he dons this costume in the less-than-thrilling Blackest Night #8. 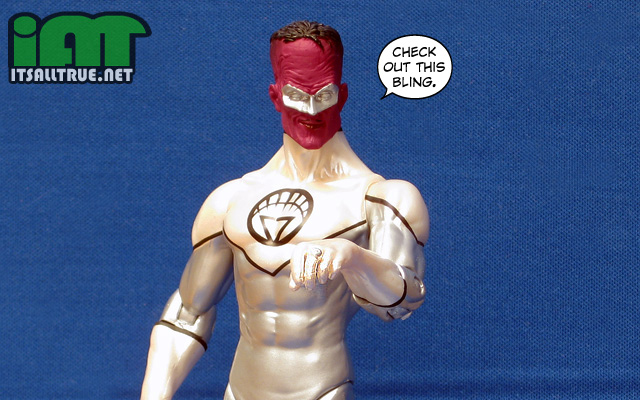 The articulation is normal for a DC Direct figure. There’s a great ball-jointed head, limited ball shoulders, hinges at the elbows, hips, and knees, and swivels at the boots and gloves. The articulation is mostly sufficient, but the hips are blocked a bit by the weird design of the lower torso. For some reason, the t-crotch is designed to be off-center. Just a little odd.

I love the paint. Well, on mine, the mask is a little bit sloppy, but I love the use of the pearlized white and silver to recreate the White Lantern costume in 3-dimensions. When we finally get to the identity of the true White Lantern in Brightest Day, I’m excited and hopeful that that character will get an action figure release. White Sinestro doesn’t really fit in with my DCUC/DCD* “New Guardians” display because he’s already there in yellow, so hopefully that character gets a decent costume and a decent figure from DCD or Mattel. 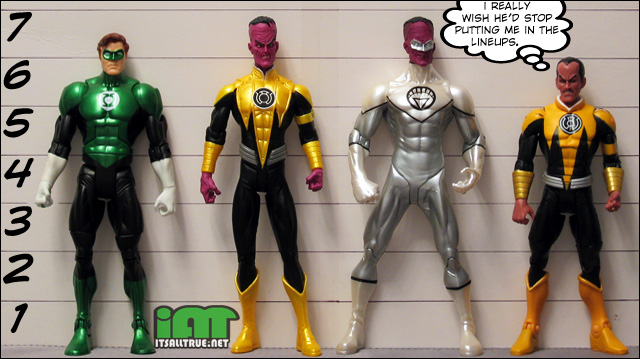 Sinestro also included the aforementioned White Lantern ring and White Lantern stand. I’m kinda/sorta collecting these on the side. My comic shop never got in the white ring, so I was happy to grab it here. This figure is currently the only way to get the White Lantern symbol stand (though the Brightest Day figures will probably have it too). Since there’s so much reuse here, I think it would’ve been nice to throw in a White Lantern also (the SDCC 2009 Hals all included a lantern, ring, and stand).

Overall, I’m pretty pleased with this purchase as far as DC Direct figures go. Would I have been okay never owning it? Yeah – while I love having the various patriarchs in their proper colors, there’s not much need or call for characters like White Lantern Sinestro or Black Lantern Hal Jordan. But he does look cool on my shelf and sometimes that’s enough for your $20. 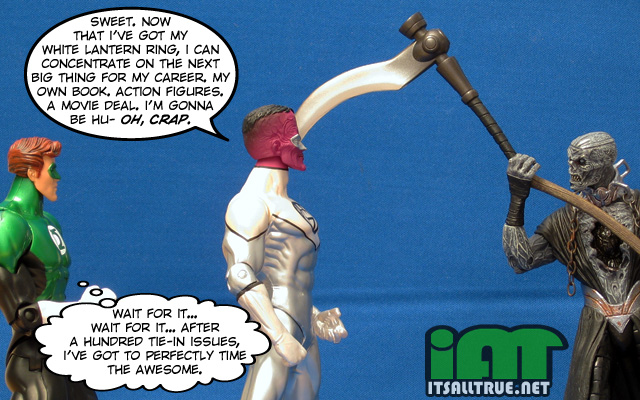