I don’t buy a lot of Star Wars toys, but I’ve always wanted a good toy of General Grievous. And although he’s had quite a few figures since his debut back in Episode III, none of them have really lived up to my expectations. I bought the Vintage Collection Grievous, hoping he would finally be the one I was waiting for.

I’m a big fan of General Grievous, or at least the idea of him. An almost flawless tactician who is trained in the ways of the lightsaber and even uses his massive robotic body as a weapon. A lot of people didn’t see this side of him because Grievous seems to have much more respect in the Expanded Universe than in his short lived asthmatic appearance in Episode III. But even with all this badassery going his way Grievous is ultimately Star Wars’ Snidely Whiplash, an analog of the stereotypical silent movie era villain who would tie a damsel to a railroad track for a deed to her moisture farm. That’s what I love most about him. You can almost hear him twisting his mustache when the deck is stacked in his favor, but when the tide turns he’s the first one into the escape pod. 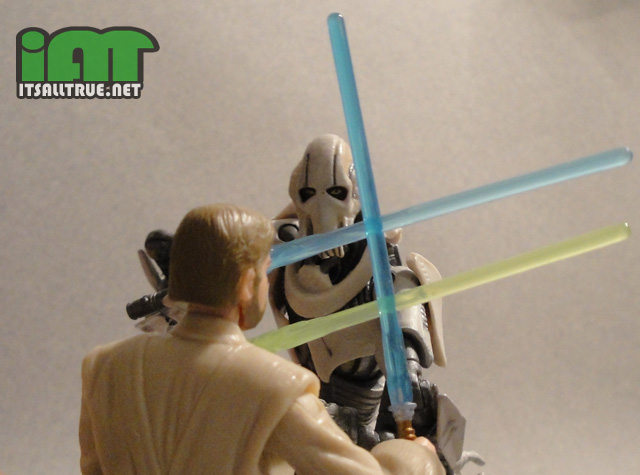 Grievous can be found in the second wave of the new Star Wars Vintage Collection series. There have been quite a few Grievous figures in the past, but I’ve never been totally happy with them. There’s always been something missing. Sometimes it’s that his arms don’t separate, or maybe they don’t combine, some don’t have capes, some don’t have lightsabers. One was even stuck in this strange crouching position. But when I saw this figure at my local Toys R Us, with its big beautiful cape and loads of articulation, I couldn’t resist buying him. My only regret is not getting the Magna Guard that came in the same wave. My Grievous need someone to follow him around. 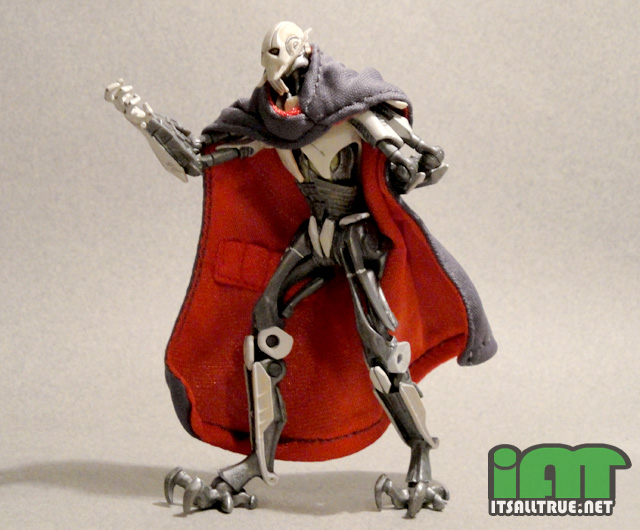 Since Grievous’ articulation impressed me so much, I’ll start with that. His head and torso are ball jointed, which allows him the range to lean forward like he’s normally seen when skulking around his command ship. His shoulders and ankles are both ball-hinged. The shoulder joints are split down the middle, allowing the front and back of each arm to move independently of each other. All four biceps, forearms, and wrists have swivel joints and each elbow is a hinge joint. This allows each arm to move and pose freely. Grievous’ hips are swivel joints, but I really wish they were ball joints. It would have given his legs a little more range for those extreme poses. Last, his knees are double hinges, so he can basically squat like Spiderman. This figure has so much movement potential that it’s hard to decide on what pose to pick. 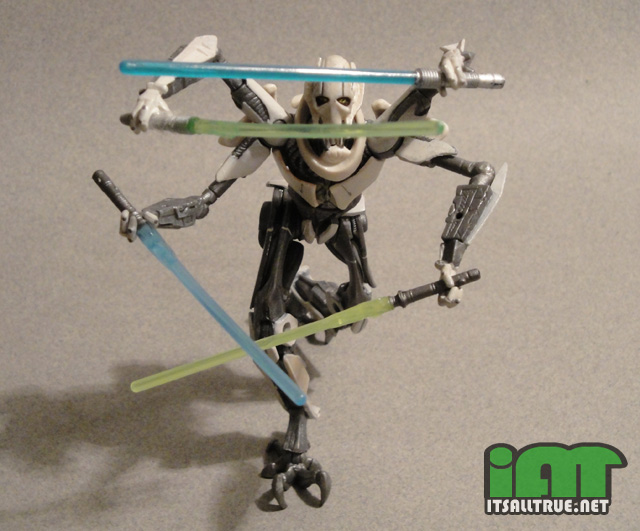 What does cut down on the posing is the type of plastic Hasbro used for this figure. While his upper and lower torso is hard plastic, his arms and legs are soft and gummy. It’s not so horrible that he can’t stand, but you aren’t going to get too many dramatic poses out of him without some sort of prop or base. Some of the crazier poses you see in my review only stood for a second or two, just barely long enough to get the picture. Besides the fact that I’m worried about his plastic degrading over time, I’m also annoyed Hasbro didn’t at least use stronger plastic on the legs. I don’t mind the arms being a little bendy for posing, but the legs are where all the support needs to be, and this figure is too articulated to be sitting all the time. 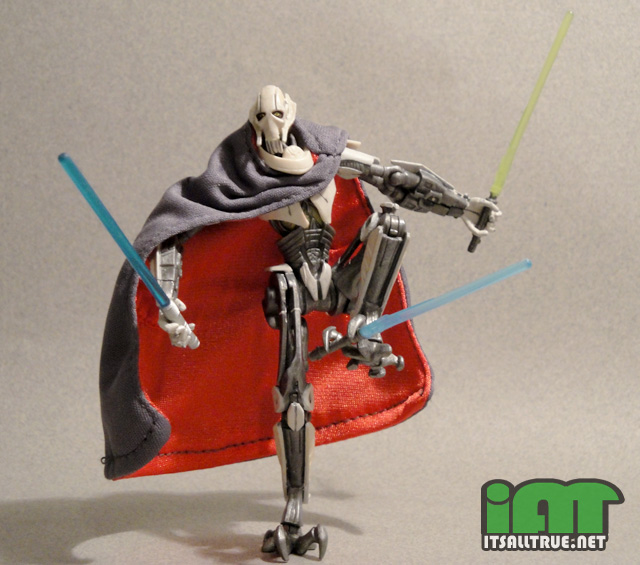 Grievous’ paint job is simple but nice. Most of his parts are molded the metallic gray of his skeleton with the off-white armor painted on. Underneath his chest armor are the dirty green colored parts that hold what’s left of his organs. There’s not a lot of slop on the figure, which is nice, especially on the smaller places like his eyes or the lines in his mask. Continue to Page Two….