The Doctor comes with one accessory: his Sonic Screwdriver. Made out of a soft bendable plastic, the screwdriver fits snugly into his right hand. It’s nicely sculpted for such a small item, and it resembles the show’s version pretty accurately, but there is one problem. They painted the light effects blue instead of green. I haven’t seen another 11th Doctor figure yet, but I’m hoping this mistake isn’t repeated on all of them. 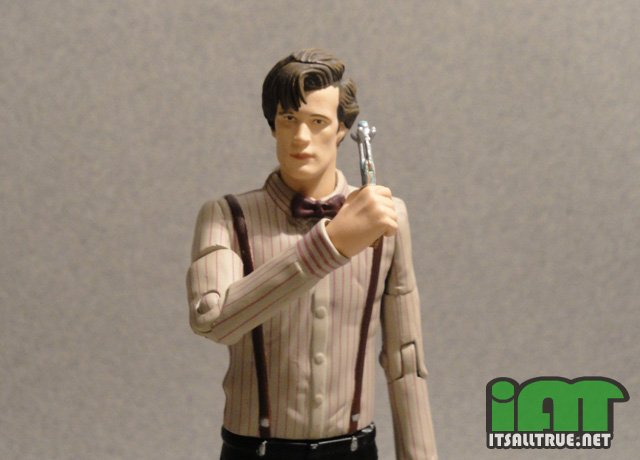 Now, to the main reason I bought this two-pack: the orange Dalek. Orange? Why orange, you say? Well, this new breed of Dalek is color coded for easy identification. I’m not sure what each color represents yet, but the orange Daleks are scientists.

Even though the new Daleks have that same familiar feel, they are also very different from past versions. The most striking difference to me is how big they are. Standing at five and three quarter inches, these new Daleks are an imposing sight next to a regular figure from the toy line, not to mention the old Daleks. Not only are the new Daleks taller, but they’ve also bulked up with a longer body. I guess they were getting tired of being compared to trash cans. 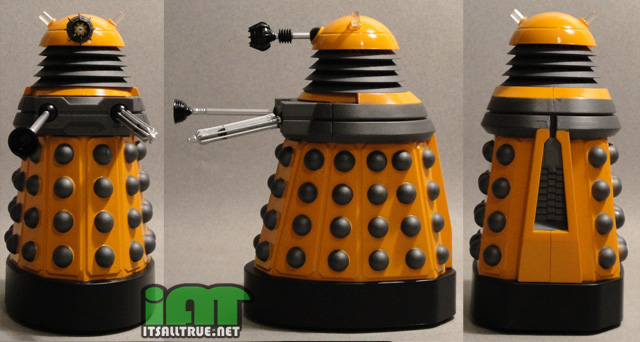 There are also a lot of small differences between the new and old Daleks. The eye stalk is larger, with the center blue iris being replaced with a more eyeball looking device. The dome lights on each side are simpler, resembling clear rods instead of flared light bulbs. The gun and plunger arms have also grown, and are both connected to a more pronounced collar area. Also, the bumper at the bottom has gotten noticeably larger. 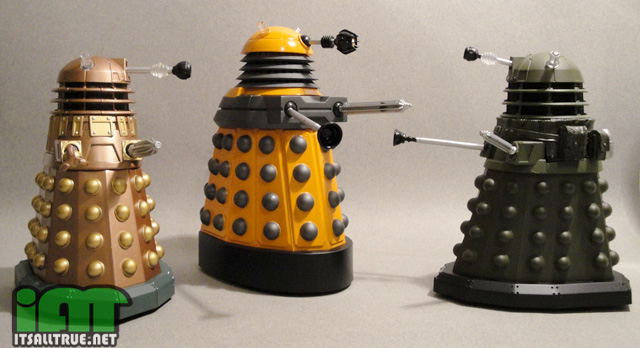 Even with the changes in the Dalek’s appearance, their mobility seems to be mostly the same. Like the older versions, these new Daleks have a swivel dome and a ball joint for each arm. Even though the eye stalk on the new one appears to connect to a similar ball joint like the arms, it’s actually just a hinge and can only move up and down. One place that did change was the wheels though. Unlike the older Daleks who had one swiveling wheel on front and two stable wheels on back, the new Dalek has three swiveling wheels. I thought this would allow for greater mobility over surfaces, but I was wrong. The wheels have a hard time lining up in one direction together, and even when they do, there’s some resistance to forward movement. Where I could slide the old Dalek across the floor, this new one only skids to a halt. 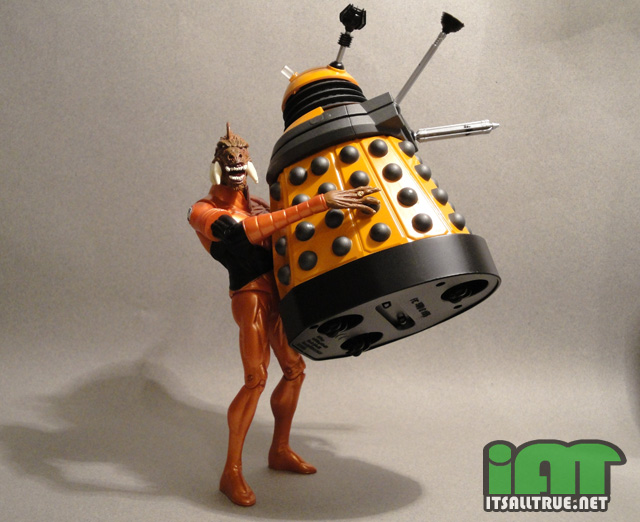 The Dalek’s paintjob is simple, but very effective. A lot of people have dubbed the new look “Dalek Rangers” because of the bright Power Ranger-like rainbow colors. Personally, I’m a fan. I think the thick orange is sleek, especially offset by the darker blacks and steely grays. If the rest of the figures come out painted this well, then I’ll be happy to assemble my team of Daleks with attitude.

Even with the few minor issues, I’m happy with this set. I bought it for the Dalek, and got a pretty nice Doctor figure to boot. Currently, Underground Toys is offering this two-pack on their website for a limited time to those in the US and Canada who didn’t make it to SDCC. It’s retailing for $40, which may seem a bit high, but you have to consider that his was an import and an exclusive. Plus, it’s orange!