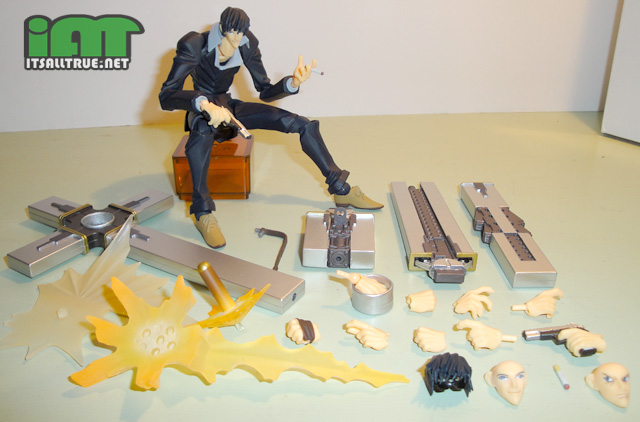 Wolfwood actually comes with more accessories than Vash. But like Vash, most of them are extra body parts. He comes with twelve alternate hands including two holding pistols, one holding the center of his cross, one holding the strap to his cross, two fists, and various versions of open hands. Like Vash, his pistols aren’t removable, which is disappointing. Along with the hands are also three alternate heads: one happy, one not happy, and one angry. I was shorted an unhappy face and given an extra happy one by mistake, so you won’t see that one in my pictures. Wolfwood also has alternate hair with molded on sunglasses that you can use instead of his regular hair piece. 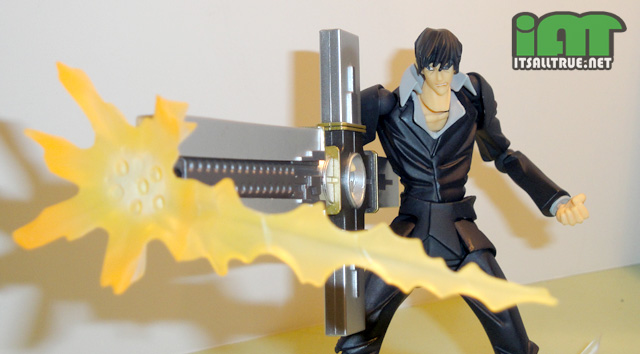 Wolfwood’s cross is an accessory with its own accessories. The bottom of the cross can be replaced with the machine gun piece. While both the top and bottom can be switched out for the rocket launcher parts. Then there are the special firing effects for both sides. Similar to Vash’s gun, the machine gun side of the cross has a blast spray with a cool trailing pattern that can be attached to the nozzle. On the other end, there is a blast effect with a rocket coming out that can be attached. These both make for some very dynamic poses. But if you don’t want to display the cross in weapon mode, there is a strap that can be attached to it for Wolfwood to carry. 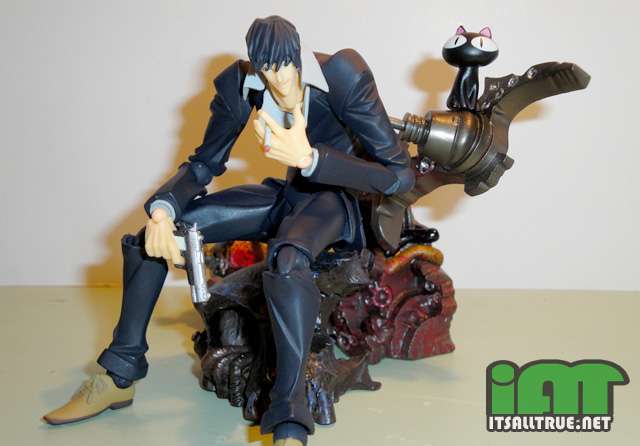 Lastly, Wolfwood comes with two very small cigarettes. Both are nicely detailed with a filter and a small bit of ash with a red spot on the end. The cool thing is he can actually hold them between his fingers. I was pretty happy with that, considering smoking is a big part of Wolfwood’s look. But you will have to be careful, they are small and I’ve almost lost one twice now. 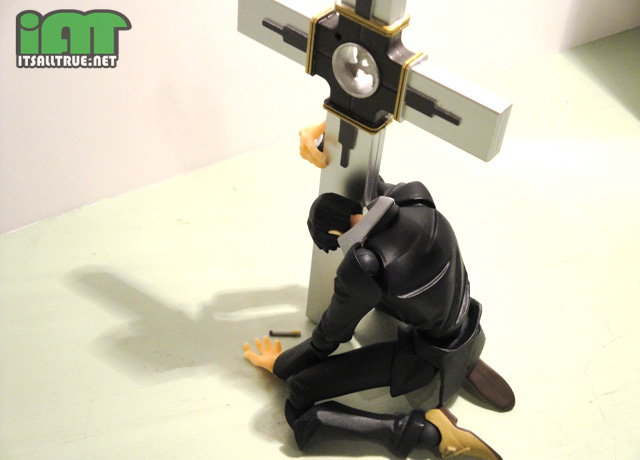 Wolfwood is my favorite character in Trigun, but I’m not entirely happy with this figure. I love the articulation and accessories, especially his cross which is insanely detailed. I like that he came with cigarettes and an extra hair piece for his sunglasses. Even though I’m not a fan of all the wrinkles, I can live with his look. But I’m very annoyed by the height difference between him and Vash. Also, Vash has so much more “life” to his figure. When I see him sitting around on my desk, I want to pick him up and pose him and his crazy coat in a thousand different ways. I don’t get that same feeling with Wolfwood, and that kind of disappoints me since I had high hopes for him. Wolfwood will cost you about $30, like,Vash. And you might feel compelled to buy both, just to complete your team. But, if you’re really looking to buy just one of these figures, go with Vash.