With the upcoming movie Trigun: Badlands Rumble, what better time to make a few figures from this space western anime series? Last week I reviewed Revoltech’s Vash the Stampede. This week I’m taking a look at the other half of the first series: Nicholas D. Wolfwood.

In the Trigun series, Wolfwood is a traveling priest and gunman. He is an expert marksman with his pistols, on par with Vash even. Plus his cross, the Punisher, can transform onto a machine gun on one end and a rocket launcher on the other. His main goal is to raise money to support an orphanage, so other children don’t have to suffer the hardships he experienced as a child. This usually involves violence and killing, which he justifies by saying that the world is cruel and those he kills are evil men. By the end of the series, and at great personal cost, Wolfwood comes around to Vash’s belief that life is sacred. (Manly tears were shed during that episode.) 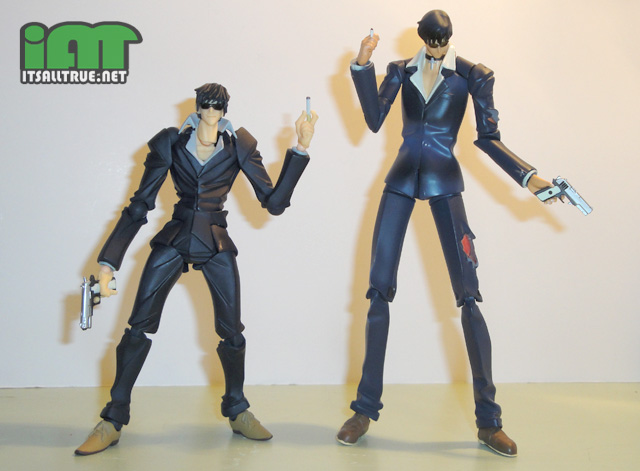 I was a big fan of the Toy Tribe version of Wolfwood when it came out in 2001, but like with Vash, the Revoltech version is superior in most ways. The man who sculpted Vash, Yamaguchi Katsuchisa, also was the sculptor on Wolfwood. Portrayed in his classic blue suit, he gives off an entirely different style than Vash. There are sculpted wrinkles and fold lines all over his suit, giving off the impression that the sculptor used the manga as his source material. As opposed to Vash, who even if he was also influenced by the manga, feels much more fluid and dynamic like the anime. Although I don’t hate the look, I think he could have used fewer wrinkles. This would have made him and Vash feel a little more like they were part of the same line. 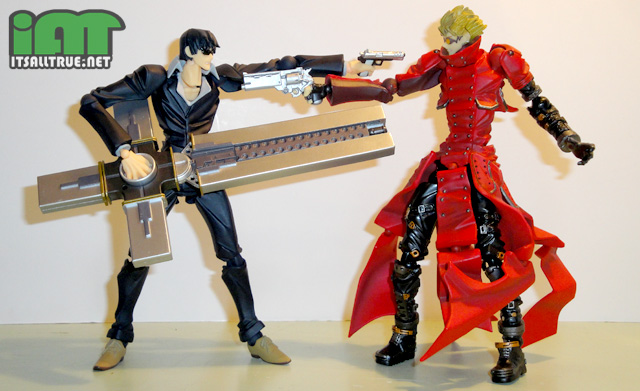 Something else I wasn’t very happy about was how short Wolfwood is. In the anime and manga he and Vash are about the same height, with Vash being slightly taller. The figure is almost an entire head shorter than Vash though. This makes posing them together pretty awkward. To get some good pictures of them, I had to put Wolfwood up on something or bend Vash down ridiculously low. If you look at the pictures where they are together but you can’t see their feet, it’s because of that reason. I don’t mind the different styles so much, but I am annoyed at the lack of scale, especially by the same sculptor. 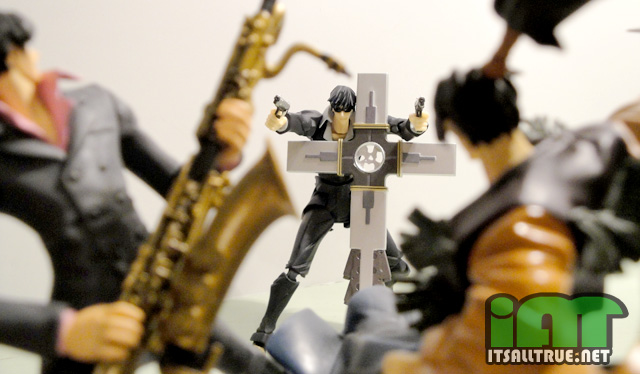 Wolfwood’s paint job is good but very simple. His suit is molded in a dark blue color while the collar of and cuffs of his shirt are painted a very pale blue. His shoes are molded light brown and given a painted dark brown sole. The paint on his face is nicely done, giving him the perfect cocky nonchalant look on one and clearly angry on the other. 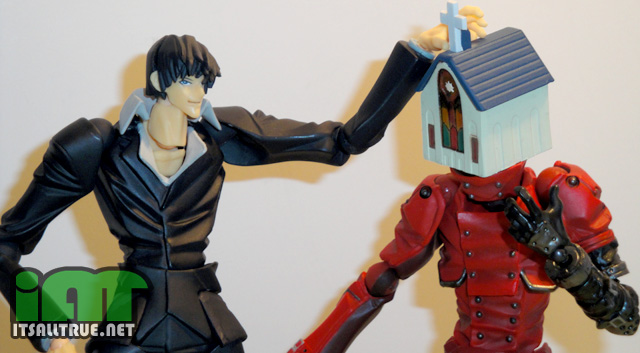 Like Vash, Wolfwood’s made up of almost all revolver joints, with a couple changes thrown in. His upper neck, lower neck, upper chest, shoulders, elbows, wrists, and ankles are all common revolver joints. His knees are double revolvers. But his thighs are double hinge joints. Each hip is separate, connected to the body with a hinge joint, and then connected to the leg with another hinge. I’m guessing they went with this choice to better fit the look of the suit. It doesn’t really take away any movement from the figure though, which is good. Continue to Page Two….