Who thought that Tommy from 3rd Rock would actually play a convincing Cobra Commander? Not I. But I was wrong. So, after the movie was over, I went out for an action figure of the Commander in his newest duds. But none were to my liking, until now. Say hello to the new face of Cobraaaaa!

The IAT crew originally saw this version of the Commander at Joe Con last year. The plan back then was to make him a mail-away figure. But plans change, and he became a chase figure in the new case assortments. I really wanted this figure, and that news was a little troubling. I’m an old school fan of the mail-away figure, plus I didn’t know just how rare he would be. Luckily, it doesn’t seem like he’s too hard to find. From experience, it looks like there’ll be one per case. 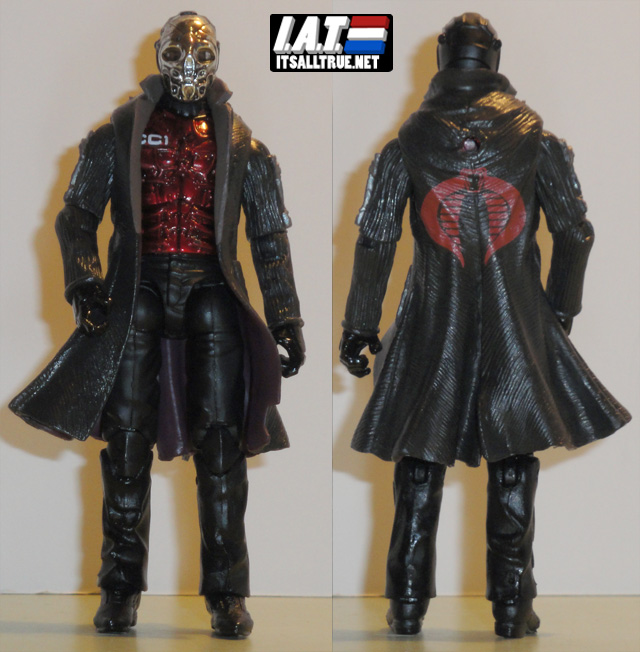 In the transition from exclusive to chase, Cobra Commander also lost an accessory. Originally he was going to come with a HISS Drone. It was basically a miniature HISS that was designed to fit inside the rear hatch of the big Tank. It could be deployed for recon or attack, since it had a firing missile action. Sadly, this little drone has fallen by the wayside, and I’m not really sure if there are plans to ever make it. It’s really too bad. This was a neat little accessory for any figure to come with. 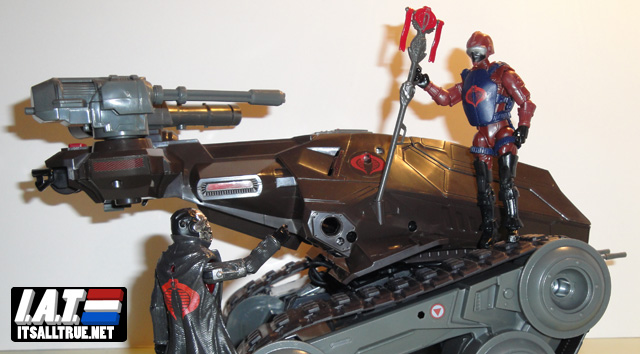 Other than the drone, CoCo comes with everything else he was supposed to get. There’s a Cobra Standard. It’s the same mold as the one that comes with the HISS Tank, but this one has red and silver highlights. It’s neat to see it colored. But it’s not very practical in battle. I don’t think he’d really want the Joes knowing which HISS Tank he was in. CoCo also comes with a hand gun that can plug into either leg for storage, and a large triangular weapon called an M.I.A.W. (Multi-Functional Individual Assault Weapon). It’s not really specific what the multiple functions of this weapon are, but I’m guessing it has something to do with Nanomites, or weather domination, or maybe resurrecting genetic material from long dead warlords and conquerors. 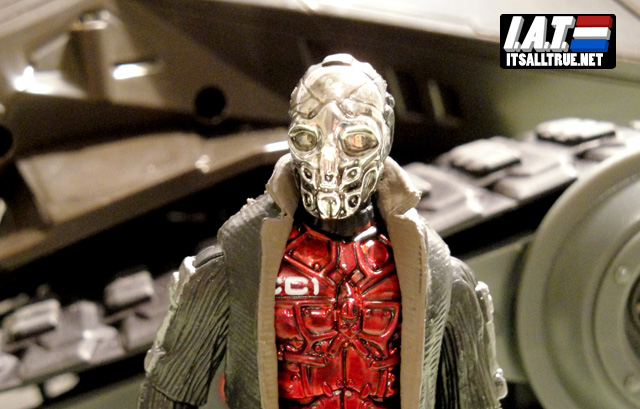 What I like most about this figure is how he looks. Unlike the movie figures, you can’t see this Cobra Commander’s face. His clear mask is replaced with a chromed version. This new mask was also black washed, so each little sculpted detail is highlighted. The wash also created a texture of grime, giving a nice tarnish look to the mask. The story behind the mask change is that this new version is a giant solar cell, collecting sunlight to power his new battle suit. 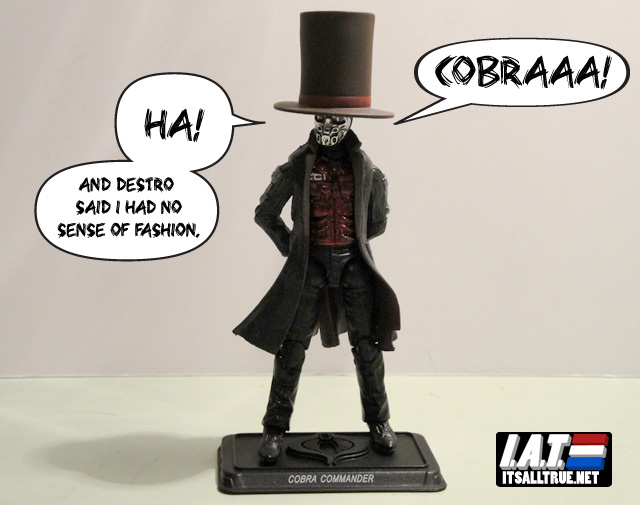 Lucky for us, CoCo has gone shirtless, revealing the torso of this new battle suit. The suits design forms a robotic musculature and is colored in a deep metallic red. One thing I found interesting was the CC1 on the right peck. I’m not really sure why he would label his clothing with his initials. Maybe it’s so everyone knows it’s his. There are an awful lot of armor suits lying around the Terrordrome. I don’t blame him if he doesn’t want some random viper or skeevy Dreadnok wearing his stuff. Continue to Aritculation & Packaging….