In Transformers: War for Cybertron, you get to play as your favorite Transformer and fight the battle that started it all. But, if you’re old school like me, you’re probably looking to reenact that battle on your shelves too. Hasbro knows this and we’ve already got for first WFC figure: Optimus Prime.

I’m a little behind on my video gaming, so I haven’t played War for Cybertron yet. I want to, but I just haven’t had gotten around to it. One of the things I loved about seeing the previews were the new designs of all the old characters. With a nice mix of G1 and Movie Universe designs, all in the style of pre-human influenced Cybertronian designs, what’s not to love? That’s why I was stoked when Hasbro announced they were releasing figures. I was also surprised. You don’t normally see video game toys so close to the release date of the actual game. 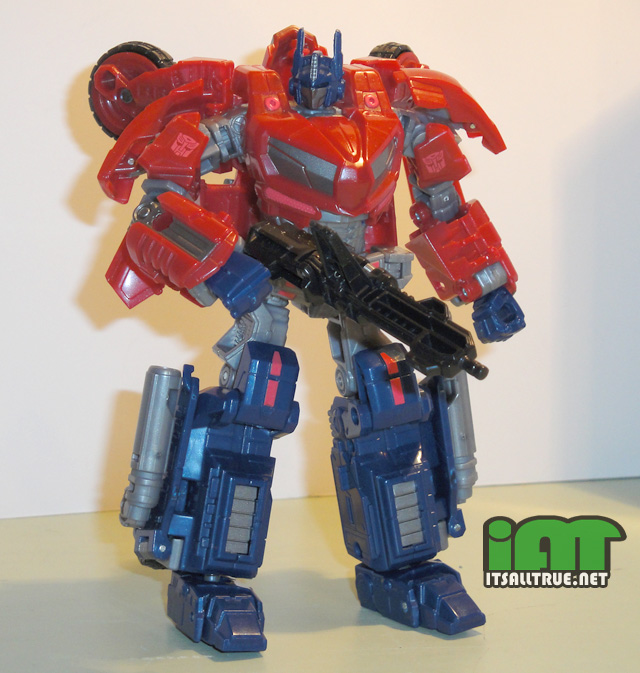 Usually, my least favorite part of a Transformer is its vehicle mode. That probably sounds sacrilegious to some, but I’ve just always been more interested in the robot form. Optimus’ alt mode doesn’t really appeal to me. I’m not sure what it’s supposed to be. It gives off the impression that it’s some sort of Cybertronian truck I suppose. To me, it looks like a supped up antique Cadillac with the rear of a tow truck. 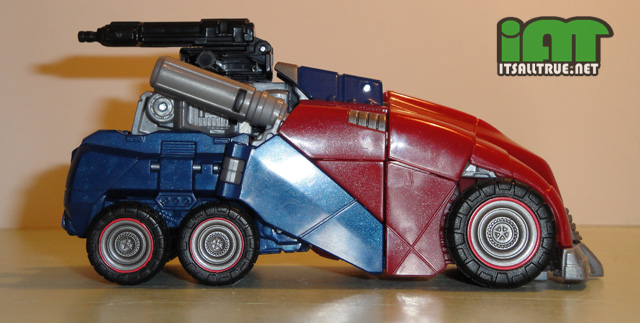 Aside from not really caring about the design, there is something that does annoy me a little. When compared to the Bumblebee from the same line, there are clearly little details lacking. The Cybertronian look has these really nice light piping details and lines throughout the robots. It’s like all of Cybertron is waiting to street race with Vin Deisel. The light piping on Bumblebee is created by using clear red plastic, this gives him that luminous look. Optimus just received this light reddish orange paint on those areas. Not quite as impressive.

Quick, let’s transform him and never speak of his vehicle mode again! Just give me a sec… or maybe a minute. Where did I put those instructions? OK, here they are… How many times am I supposed to turn his chest? The arms are stuck! Hold on, I think I’ve got it. 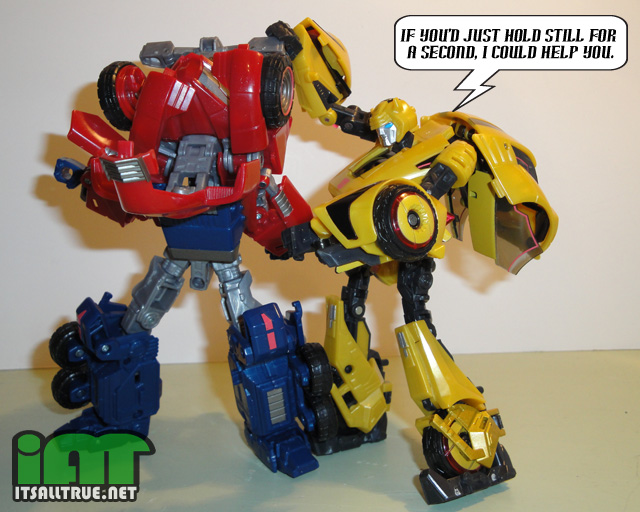 You know how some Transformers are easy and others are so frustrating that you want to rip the parts off and rearrange them they way YOU feel they should go? Optimus is more like that. He’s not the hardest Transformer I’ve ever dealt with, but he is one of the more frustrating ones. He might be even more frustrating than RotF Bludgeon. I’m not exactly sure on that though, because I still refuse to put Bludgeon back into his tank form. Continue to Robot Mode….