When my TRU finally received the Pursuit of Cobra HISS Tank, I had to have it. While I was excited that my year-long wait was finally over, there was another vehicle at TRU that day. It had a new name and a new driver, but I knew it from my childhood. I couldn’t leave without the Wolf Hound.

If you’re thinking that the Wolf Hound looks familiar, you’re right. This mold was first released in 1985 under the name Snow Cat. It would be released in a few more decos over the years until its fifth and latest incarnation, the Wolf Hound. My original Snow Cat was one of my favorite Christmas presents. That’s why I had to buy it, it was a little piece of nostalgia sitting in the toy aisle wanting me to take it home. 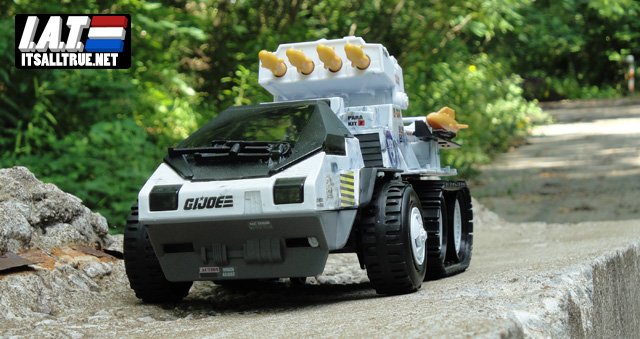 I’m not exactly sure why Hasbro released this vehicle in the middle of summer. I know I would have had much more fun taking pictures in the snow with all my arctic Joes. That’s the closest thing I get to playing with my toys these days. Most of the time they just get posed and set on a shelf. Maybe this winter there will be another arctic release and I’ll get a chance to bring this guy outside again. 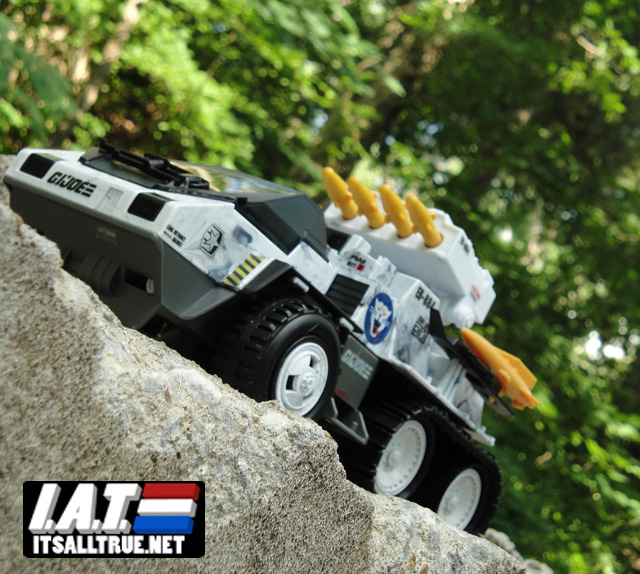 Although the body of the Wolf Hound is almost entirely the same as the Snow Cat, the Hound has undergone a few minor changes. Namely the addition of a bluish-gray color streaked throughout its white body. The original Snow Cat’s body was all white. Compared to the Wolf Hound though, it comes off very plain. This new mixed in color not only gives a nice camouflaged feel, but it makes the vehicle unique to a certain extent. I doubt there will be two with the exact same swirled paint deco. Mine isn’t even consistent throughout. The driver’s side has much more paint than the passenger side. This might give you Joe collectors with OCD pause, but I like the randomness. 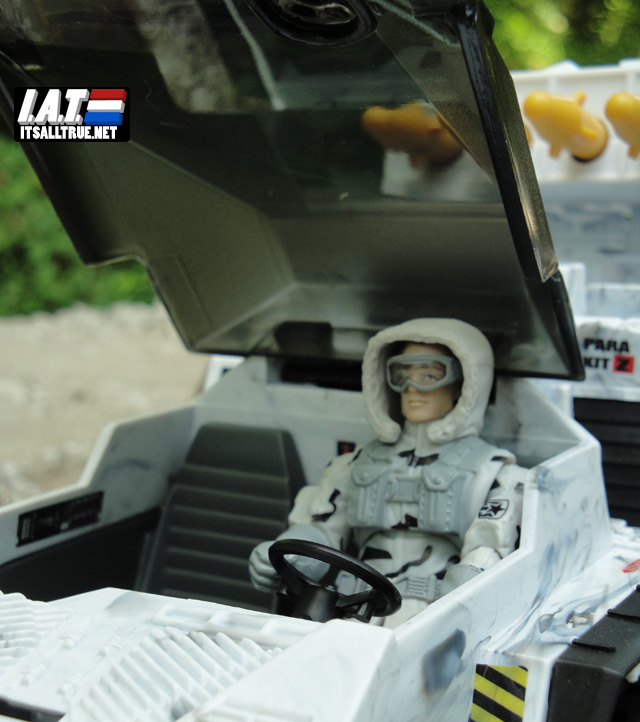 The Wolf Hound has two front working wheels two hidden wheels underneath the rear threads (they’re just for show). I realize we just got a HISS Tank with moving treads, and even though they have problems, I would like to see this trend continue into other vehicles. I always enjoy as much realism as I can get on my fake military vehicles. 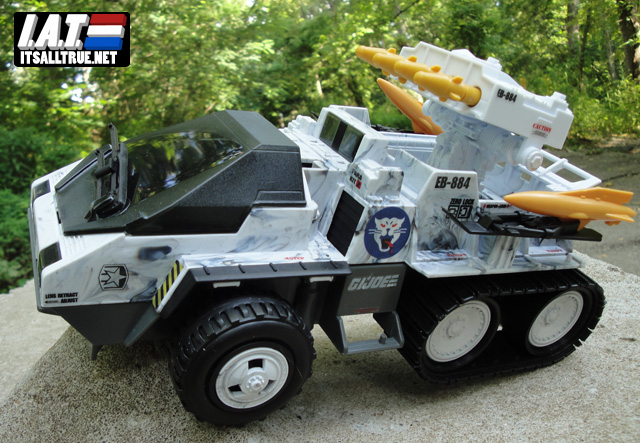 Wolf Hound has two sets of weapons. The first are two yellow torpedoes that sit on skis. I remember the old Snow Cat commercials where these torpedoes would slide easily downhill and take out some Cobra baddies. So cool, but I could never recreate that effect in real life. The Hound’s second line of attack is its missile launcher. The entire battery can rotate 360 degrees while the head can move up and down. This gives it a huge range of attack. When I was a kid, the Snow Cat had four missiles that sat firmly in grooves inside the battery. Toy technology has come a long way since then. The missiles don’t just sit inside, but they can be launched by pushing a small lever from one side to the other. As the lever passes each missile, it activates a spring, shooting that missile out. It’s a pretty swanky little contraption. Plus, the missiles fire with much more force than I expected, easily clearing three to four feet. Continue to Page 2….