Short and sweet I said, right? Okay… when Superman died in the early 90s, he was replaced by 4 new Supermen. One of them, a partial-clone of Superman (& later, Luthor), broke out of his accelerated growing chamber early and took on the mantle of Superboy after the real Superman returned from death. Superboy has most of the powers of Superman, but due to his mixed up DNA, he’s missing a few while having a few others that Superman doesn’t possess. In recent years, his costume has been simplified to a black t-shirt and jeans. I want a figure of that too, but I’m happy to get this one first. And to just throw in some complicatedness, his dead body is in the Fortress of Solitude while he’s running around in the books right now. 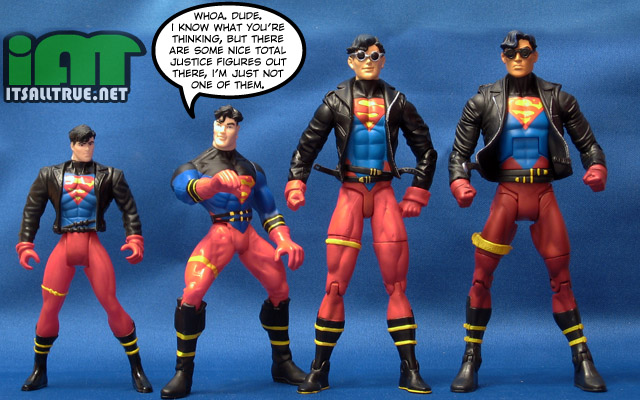 Superboy is based on the Sinestro buck, but he has plenty of new pieces: calves, a leg belt, a regular belt, a jacket, new arms, and a new head. First, I should talk about the height. Using the Sinestro buck is exactly what I wanted Mattel to do. It may be just a tad bit tall, but it’s closer than the young teen body used incorrectly on the college-age version of the Tim Drake Robin.

Of the new pieces, I like most of them. All those wonderful 90s straps and belts are well done. The head sculpt and separate glasses look great right down to the raised eyebrow. You can’t pose him this way unaided, but if you push his head down and tilt the sunglasses so that he can look at you over the rims, you’ll see just how good this head sculpt is. I tried to snap a picture of it, but I just couldn’t capture it on the camera. Just don’t press down to hard on the glasses of course – we’re not responsible for broken toys! He is missing his earring, but I guess that’s okay in the larger scheme of things. Finally, the jacket and new arms have good detailing throughout and it’s a nice change to the mostly “spandex” line. 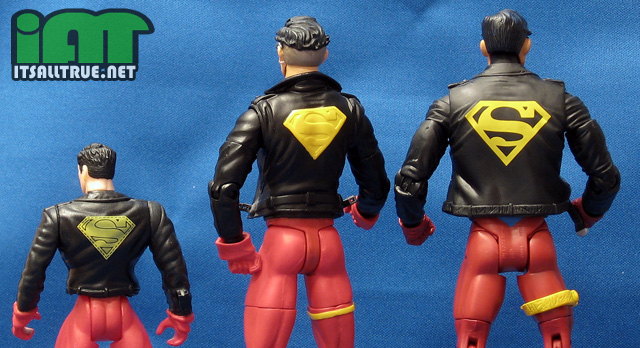 There is really nothing to report on the paintwork for this figure. Everything is pretty clean. Initial press pics featured a blue neck and shoulders, but Mattel caught it and had him fixed before he got too far along in production. On the back of the jacket, though, is a different odd paint choice. The symbol back here is a yellow emblem on a black background. It looks good and I like it, but to be accurate to the original look, it should be solid yellow with stitching details (as seen on the MOS figure on the far left). As I said, it looks good as is, so it’s a minor complaint.

Articulation is standard for the line with two things of note. One, the bicep swivels are sculpted to look like folds in the fabric which is pretty cool. And two, the head sculpt has some really good range. It’s not where I want it to be just yet, but he’s much improved over the previous couple waves which ended up with restricted swivel joints.

I’ll have to add a picture of the buttons later, because I forgot and because I know we all care so deeply about them. I haven’t been able to determine the origin of the Superboy button, which features an out-of-costume Superboy lifting the Kent’s tractor over his head, but Donna’s button features cover art from New Teen Titans #1 (1980).

Overall, these two figures have different destinies on my shelves. Donna’s a couple mistakes shy of being a decent figure. Plus, she’s not in my favorite Donna Troy costume, and that’s going to leave her destined for the middle ranks of the shelf where I can’t see the attached lasso or her crazy eyes.

Superboy is from one of my favorite eras of comics and is part of one my favorite childhood storylines and he still managed to meet my expectations. I’m happy with the height, the sculpted details, and the head sculpt in particular. I really treasure my DC Direct Reign of the Superman figures.*

I initially missed the Cyborg Superman, but my future wife found him at a comic shop, still at regular price, long after his price had skyrocketed and grabbed him for me. I picked up the other three while I was working on my first big corporate assignment in Oklahoma City.

Because of my connection to the DCD ones and the sharpness of the DCUC set, I think I’ll be keeping all eight figures out for display right now. The Mattel Cyborg Superman leaves a little to be desired, but the DCSH Steel makes up for him. This new Superboy finishes off that set and has earned a spot near the front of my DC shelves. The kid looks great. 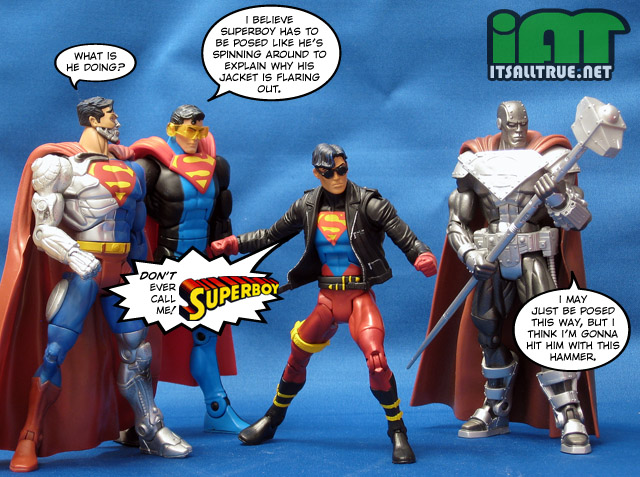