If you follow Mattel rumors, DCUC13’s lineup had to be rearranged. Some say it was because DC asked for certain characters to be held back, but we’ll never know for sure. Still, the lineup seems devoid of an A-list play pattern. Superboy has the top spot, but I’m not sure how Donna Troy is supposed to pair off with him.

Minds out of the gutter, readers, as there are some connections. Superboy and Donna are both Titans, though decades apart and never in these costumes at the same time, and they’re both junior versions of top tier superheroes. So, there are a couple reasons why Mattel might pair these two up. It could also be simply because they rhyme (sorry about that title, btw). Nonetheless, the play pattern is back in DCUC14 (father/son) & DCUC15 (interwoven alien histories), so it does seem like something was fishy with this wave, but we can only speculate. 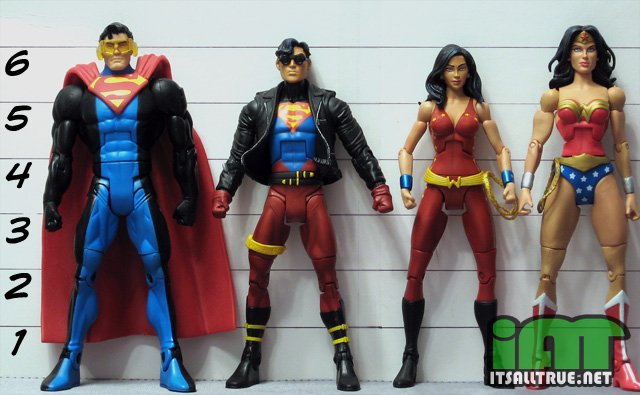 Usually, I like to explain a bit about the characters origins in these reviews, but Donna’s past is really a tale of bad editing. When the Teen Titans were being crafted, Wonder Woman was sans sidekick. There had been a “Wonder Girl”, but it was simply a younger version of Diana. Still, this version ended up in Titans and a new back story had to be created – when Donna was a child, Wonder Woman saved her from a fire that also left her an orphan. She was raised on Paradise Island as Diana’s sister, taking the mantle of Wonder Girl and joining the Titans. Simple enough.

Then, after Crisis, Wonder Woman was rebooted and couldn’t have saved Donna anymore, so she was instead inspired by the United States flag (Really?). When Diana’s mother, Hippolyta, was briefly retconned in as the Golden Age Wonder Woman, she inspired Donna to become Wonder Girl. After that, it was back to the flag presumably. Later still, she was rewritten to be a mirror duplicate/playmate for a lonely pre-teen Diana. Shortly after her creation, she was mistaken for the real Diana and kidnapped. Donna grew up living a variety of alternate lives courtesy of her kidnapper. When she finally broke free, she again became an adopted Amazon and is, again, essentially the little sister of Diana. At least until last week, when Wonder Woman’s origins were (presumably temporarily) retconned. Once again, we’re left to ask “Who is Donna Troy?” I don’t think anyone really knows.

Did that hurt your head? I promise I’ll keep Superboy’s origin short and sweet. 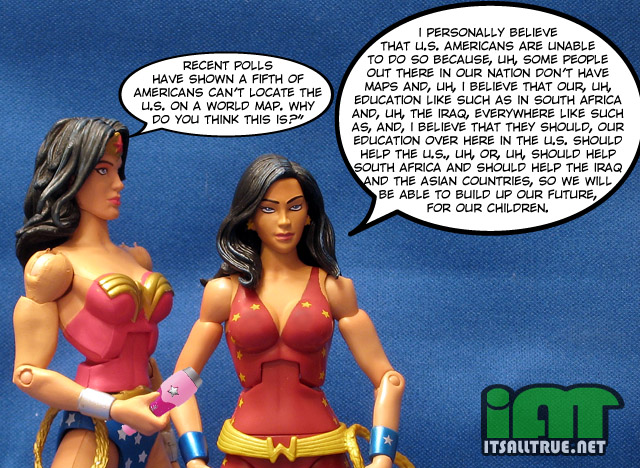 Donna Troy is an entirely new figure, the teen female buck. At the outset, I’m going to say that I’m not really concerned about her proportions because I’ve come to terms with the thinness of DCUC women. Since Donna is being depicted in her 70s costume, she should be in her late teens and I presume this body is what a late teen DCUC woman would look like. I still think all the women in the line could use to be a little beefier, but we’ve got nearly two dozen female figures and I just don’t see any real chance for change in that area.

There are some good things about the sculpt – raised boots with sculpted zippers, raised bracelets, a separate belt piece (which plugs into three holes on her lower torso). There’s also a few annoying things like her gummy, attached lasso that juts out to the side, two closed fists, and the lack of raised detailing on her torso. The last part is probably moot in a buck line, but I think it would’ve really helped the figure. If nothing else, I’m rejoicing that the women of the DCUC are no longer stuck with the uniboob! Have I mentioned that I’d really like to get a redo on Starfire?

At first glance, I wasn’t happy with the head sculpt, but it’s really the paint that is causing me grief.

The paint. The costume details are pretty good. The stars are clean, and the lines between her skin tone and costume are fairly straight. Most of the painted details on her face are nicely done, but the eyes make a mockery of all that hard work. Donna appears to be zoning out while staring at the ceiling. I wanted to see if some lower eyes would look better, so I played around in Photoshop for a bit. It’s not my best work, but I think it looks better. Of course, if the factory ones could come closer to matching the 4H 2up, it certainly wouldn’t hurt.

In light of the few days I’ve spent mulling over this Donna review, I think I was a bit harsh on the Cheetah figure’s hip articulation. I did have to unfreeze a lot of hip joints between the DCUC13 ladies, so some of my derision is deserved, but the hips aren’t as unworkable as I originally thought. Also, while I criticize this hip design as having a soft, rubbery connector to the torso, any experienced DC Collectors know that they all have soft hip pieces. Like many of the girls, Donna’s is internal though. I think that’s the drawback here. Before I unfroze the joint, the hip peg preferred to twist and potentially tear instead of turning like it was designed to do. With that fixed, the figure scores somewhat better. The lack of rocker joints on DCUC13 is still an annoyance for the entire wave, but otherwise Donna has standard articulation. 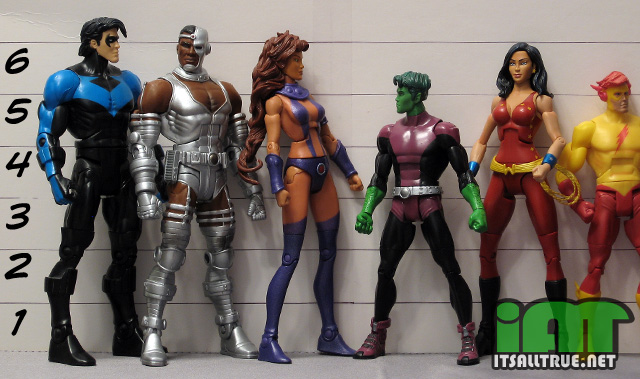 Finally, we have the scale issue. I don’t have a problem with Donna’s height, but I’m still not sure exactly which version of the Titans Mattel would like us collectors to be putting together. Looking at the image above, I think you could conceivably put Donna, Starfire, & Cyborg together to form the nucleus of an NTT group. The upcoming Raven should fit right in with them. NTT fans would still need a taller Kid Flash, Changeling in his proper costume, and a proper version of Dick Grayson though. I don’t know if we’ll get all those. Continue to Part II: Superboy…