It seems like there were a lot toys at various cons last Summer that I’m just now seeing at stores. It happened again this weekend. After wading through endless Batmen & Zombie Hitmen, I was lucky enough to finally hit up TRU the day they received the Brave & the Bold Starro, and some Gold guy.

If you don’t know by now, I’m a huge Starro the Conqueror fan. I don’t know why. There’s just something about him that’s absolutely ridiculous and it appeals to me. It’s probably the fact that this one villain is the perfect example of the outlandish stories that the Silver Age of comics were all about. It was a time when crazy ideas were given form; before fanboy cynicism and internet hate could kill them off before they were even published. In essence, Starro is the perfect loving symbol of comics most creative age. Plus, he’s a giant telepathic starfish from space, what’s not to love? 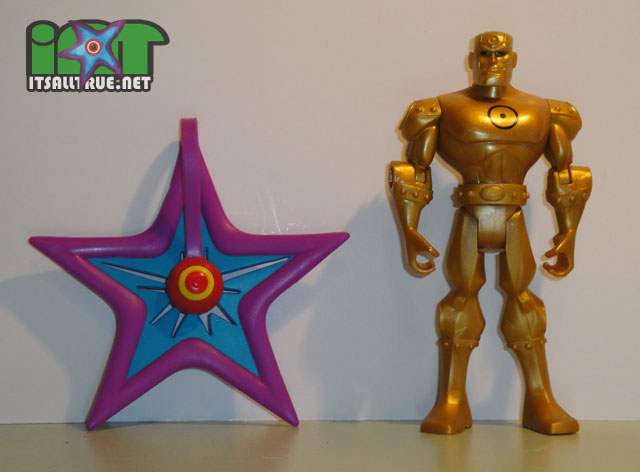 So when Mattel showed the figure line up for Batman: Brave and the Bold at last year’s SDCC, I got all kinds of excited. Three different Starros, each packed as an accessory for a Batman, Shazam, and Gold figure. I don’t really collect Brave and the Bold figures, but I knew I’d be getting those three. Sadly, a year later, this toy line isn’t doing so well and the release of figures has slowed to a trickle. That’s why I was thrilled when the Gold figure hit stores, even if he had the worst Starro of the three. More on that later, because as much as I’d like to, Noisy won’t let me drone on about Starro all day. So I guess I’ll better talk about that Gold figure too. 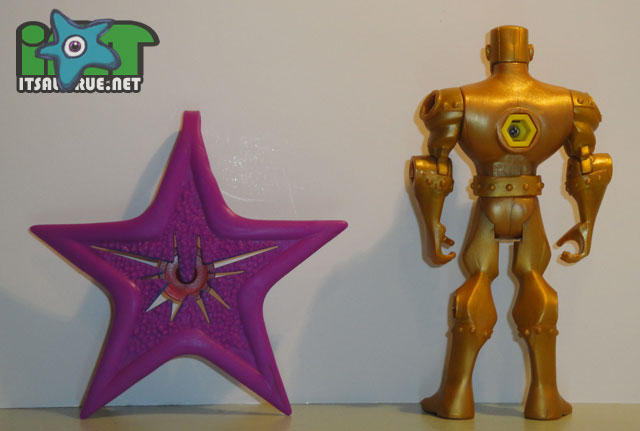 Gold is a standard Brave and the Bold figure. He’s the first figure I’ve ever bought of this line, but I’ve looked at plenty other in the aisles. Most of them, especially the many Batmen, seem to be made up of similar bodies with new parts molded when needed. Basically, it’s another implementation of the Buck system. Something Mattel is becoming extremely practiced in doing. For Gold he has a good chunk of unique pieces, most of which I assume he shares with Iron. 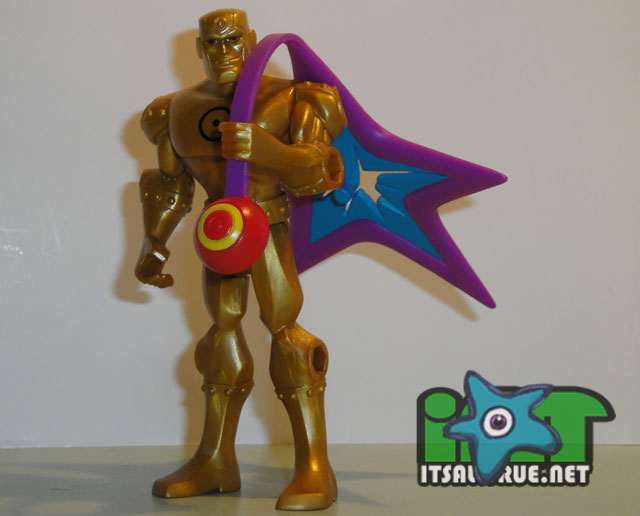 All around, this Gold figure’s a pretty good looking piece of plastic. He may not be as detailed as a DC Classics, but he’s not plain either. He’s got sculpted rivets on his shoulders, forearms, and boot tops. He’s also got a glued on belt with sculpted rivets and a large center oval. All these little details are nice, but his head takes the cake. It’s an entirely new piece with sculpted lines that run along the outer edges of the face and around to the back of his head. This gives the neat effect like he’s wearing a helmet. There’s also the sculpted gold symbol on his forehead. And topping it all off is the cocky smirk on his face. Gold’s a pretty self assured robot, and this confident smile really shows off his personality.

There really isn’t much to say about Gold’s paint job. The figure was molded in gold colored plastic, and that pretty much takes care of everything. The only other color that was added is the black eyes and chest symbol. 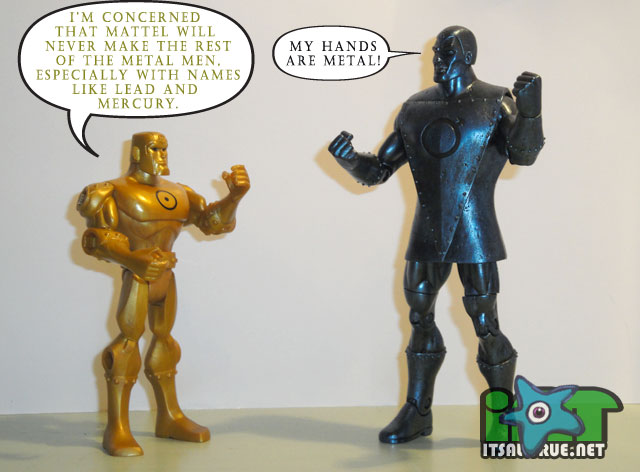 Gold’s articulation is standard for a Brave and the Bold figure. He’s god a swivel head, shoulders, waist, and hips. His elbows are hinge joints. This is pretty much all the articulation a figure needs, but I think it would have been nice to have some knee joints. It’s not necessary, but there’s enough room that they could have easily added them. Continue to Page 2 for MORE STARRO GOODNESS!…