It took a little longer than usual, but DCUC13 has arrived at IAT! It’s been nearly five months since I snagged DCUC12 online. That’s a long gap for a line that’s supposed to go through five waves a year. Sadly, some of the figures weren’t worth the wait. Let’s get three of out of the way today: the Cheetahs.

There have been three Cheetahs (I’m choosing to ignore Man-Cheetah, sorry) in Wonder Woman’s history. If you’ve managed to snag all three versions of Cheetah that ended up in the wave, you still only have two.

First was Priscilla Rich (top left) who appeared in 1943’s Wonder Woman #6. Rich was just your run-of-the-mill social debutant with some personality issues. When she was upstaged by the Amazing Amazon, Rich’s mind fractured and, at the urging of her reflection, she took up the identity of the Cheetah and started her obsession with taking out Wonder Woman. She fought Wonder Woman many times over the years, aging while Diana stayed young. When she was on her deathbed, her niece would be pressed into service as the new Cheetah.

Debbie Domaine (top right) is the Cheetah we didn’t get. This annoys me because this is the one I think of first despite her brief tenure as Cheetah. She is simply the niece of the original, brainwashed into following in her Aunt’s footsteps. When DC re-arranged history with Crisis, they erased Debbie’s time as Cheetah, left Priscilla Rich in the 40s where she fought Queen Hippolyta (WW’s Mom who was being WW at the time), and brought forth a new Cheetah, Barbara Minerva (bottom left & right). 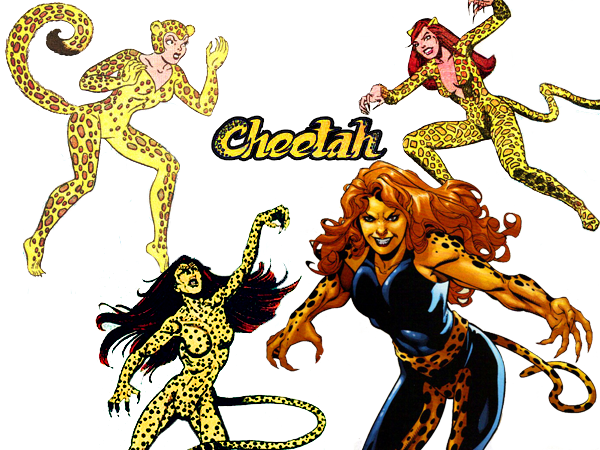 Minerva is an unscrupulous archaeologist merged with the god Urtzkartaga. Unlike her predecessors, she could turn into a cat girl instead of simply donning a suit. She coveted the Lasso of Truth and thus came into Wonder Woman’s life. She didn’t get the lasso, but she did make Wonder Woman cry and got shot by one of Wonder Woman’s friends for her trouble.

She’d become a more credible threat over the years and, perhaps more important to this review, she would start wearing clothes while in her Cheetah form. This leaves the “nudity” in her original appearances in question. And she hasn’t helped matters by wearing pants that have a cheetah print on the midriff, crotch, and inner thighs. I’m inclined to say that she wasn’t naked, but when she disrobes now (and sleeps with Snapper Carr!) she’s shown to cover up the parts that would make Wonder Woman blush. 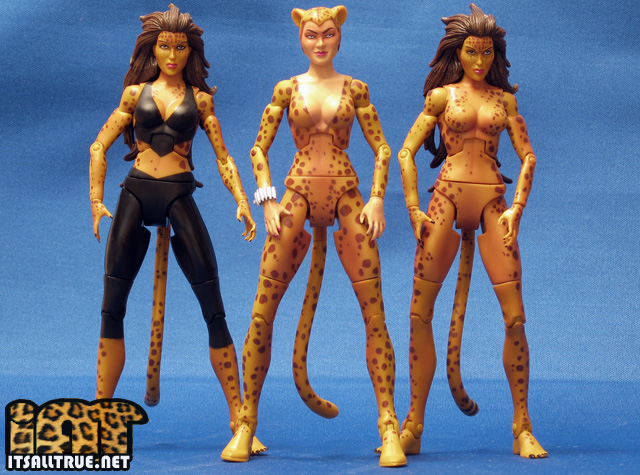 I don’t know where to start with the sculpt on these figures. On the one hand, I’m happy to see the women figures move beyond the uni-boob for a standard reusable piece.* There are some other nice details among the parts the three figures share. The tail has some texturing at the tip; the hands are sufficiently claw-like without being so much so that they couldn’t be used for the original’s Cheetah normal hands.

The main trunk of the figure seems to reuse a lot of the new Donna Troy parts. This is somewhat of a shame because of the hip problems (more on that in the articulation section) and because Cheetah could really use some fur texturing throughout. This is a cost-saving factor, I’m sure, but it really detracts from the final product. The unique parts of the figures are somewhat of a saving grace in that regard.

* – By the way, Mattel, it’s time to revisit Starfire now. 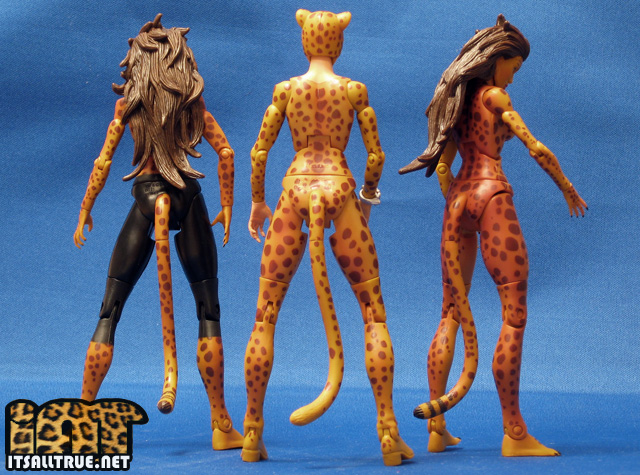 The original Cheetah scores a little higher because of her great head sculpt. It has a great expression, features the suit’s only visible seam, and adds some texture with the ears. She also uses a new wrist weapon and reuses Donna’s boots. The modern head looks good too, but I think it was an opportunity for a screaming head. I feel bad for the Four Horsemen sometimes. When they make a screaming figure like Firestorm or Alan Scott, the internet revolts a little bit and acts like they’ve been forsaken. While the Firestorm head was definitely improved, I think Alan looks good and I think that Cheetah was a missed opportunity for a screamer.

In the overall line, Mattel, the company known for making dolls, is still having problems with the female figures. The softer plastic used on limbs really hurts the ladies who are also being given too thin parts. The “twiggy-ness” of the females is another issue entirely. The ab-crunch is beyond anorexic from the side and the arms and hands are too small from any angle. I mention all this separately because these problems aren’t specific to Cheetah, it’s just how the line is. I’ll talk more about it in my upcoming Donna Troy review.

Articulation is fairly typical for the line despite the new pieces. The head has full swivel and can look up or down (the modern Cheetah’s hair keeps them from looking up). There’s also ball shoulders, swivel biceps, wrists, waist, & thighs and hinges on the elbows, knees, & ankles. The changes are in the hips and the ankles. The rocker joints have been removed entirely (the new factory for Wave 13 appears to have molded all the ankle joints attached to the foot piece – wonderful). Continue to Page 2…