Today’s nominee comes to us via e-mail from reader JasonS. Jason wrote in to tell us about the quick sellout of Lobo and what he wants it to mean for the future of JLU. In short, he’s ready to pick up more oversized characters via MattyCollector. And he knows who he wants first: Kalibak.

Any long time DC fan should at least know of Kalibak. He’s the firstborn son of Darkseid and Suli, Darkseid’s one true love. In typical Apokolips fashion, Darkseid’s mother had her killed because she was making Darkseid too happy. Aren’t Mother-In-Laws wonderful? Despite that familial setback, Kalibak would grow up to be one of the more powerful warriors on Apokolips and serve as one of his father’s primary lieutenants – all the while trying anything to earn Darkseid’s favor. His attempts in gaining said affection nearly always end in failure, both in their immediate goal and in receiving positive feedback. This has caused Kalibak to be killed by his father dozens of times. Yet his Dad always resurrects him, so ol’ stony must have a soft spot for him somewhere, possibly because he’s the only thing Darkseid has left of Suli.

But all that is in the comics… 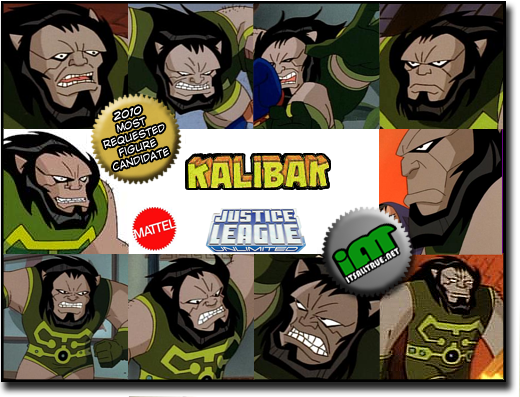 Kalibak has appeared in five television shows over the years. The first, where I encountered him, was in the last two incarnations of Super Friends. He was a bit of buffoon back then and I never really understood why anyone saw him as a credible threat (though he was voiced by Frank Welker). If you’ve ever seen Kalibak with human skin in a brown/blue/yellow outfit, that’s the SP version, a Super Powers redesign courtesy of his original creator, Jack Kirby, that I wish could have found its way into DC Classics. In his appearances across the Timmverse, Kalibak has appeared as he does in the graphic above. That includes appearances in Superman: The Animated Series, Justice League, and Justice League Unlimited. That’s what we’re here to request today.

Voiced by Michael Dorn (Star Trek’s Worf) across eight episodes, Kalibak is again portrayed as strong, but dumb and in constant search of his father’s affection. We don’t know for sure how closely the animated version’s origin matches that of the comics, but, based on his attitude and Darkseid’s general leniency towards him, I imagine it’s relatively the same. Plus, my general feeling is that if the comic’s continuity isn’t contradicted, then it fits.

So why now? One word. Lobo. Personally, I’m not sure if the future of $20 JLU figures on Mattycollector is all that bright, but Lobo did sell out quickly and Mattel should be looking to at least replicate that success a few more times if they can. Now, Lobo had a long history in his absence among collectors. He’s been denied a figure since the late 90s when Hasbro/DC deemed him too adult for the STAS line. That same thinking kept him off the shelves (but not out of the cartoons) despite a return appearance in Superman and another in the Justice League cartoon – where he defended Earth from our good buddy Kalibak.

Kalibak may not have the same press and “long-sought-afterness” as Lobo, but his situation is basically the same. He’s an STAS design that never found a home in the original Hasbro line. His subsequent appearances in JLU have yet to net him an animated figure – even during an era when an oversized figure packaged with five regular ones was a reality. In the end, Kalibak has eight appearances over an eight year span and that trumps the Main Man’s five appearances. I’d say Kalibak is a good candidate.

If Mattel is going to push forward with this JLU line, the figures need to be in high demand and should be larger than your standard fare. I share Chris’ opinion that Kalibak should get top billing in that department, but I haven’t collected JLU in years. So I want to hear what more JLU fans think – should Kalibak be next? Or do you have someone else in mind that you’d like to see Mattel conquer first?