This week, the first samples of the new Outer Space Men arrived at the Four Horsemen Studios! While the guys were test driving and reviewing the samples, they were kind enough to snap a few test shots and send them along to whet our appetites for the upcoming line. 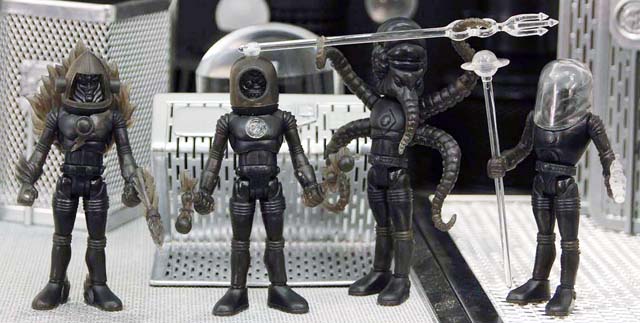 Of the shots they sent along, the one above is my favorite. They may be from different planets, but they look best next to each other. While all the figures look great, I think this picture really showcases Astro-Nautilus. I’m starting to think he going’s be the stand out from the first two waves. Tentacles really help you steal the show.

The Four Horsemen also took the opportunity to give us our first peak at the OSM combined with some Glyos offerings. While I’ve come to love the original designs and know that I’ll need to keep a proper set of the licensed characters, this picture makes me realize that I’m going to need some extras to recombine too. And not only are there some cool designs here, but if you head over to the Glyos blog you can see some cool OSM/Glyos combinations form Onell Designs owner, Matt Doughty!

The 4H have also let us know that they’ll be making an announcement about super limited, special edition 2010 San Diego Comic Con exclusive Outer Space Men figures soon. We’ll bring the news to you as we get it. For now, here’s a closer look at the test shots of the first four figures: