Have you ever waited to pick up a friend at the airport? You’re standing there watching all the other people walk out of the gate and meeting friends or loved ones. There are happy reunions and excitement going on all around while you start to worry that maybe the person you’re waiting for didn’t make it? You wait. Your eyes dutifully trained on the one spot where you can see the farthest down the hallway to the plane. You wait. You hope. You doubt.

With the announcements of Voltron and Thundercats dropping recently, I’m feeling that way a little bit right now.

Don’t get me wrong. I’m a little bit excited for both announcements, but neither is really aimed directly at me. I’ve just never been all that interested in Thundercats. I’m told by friends that the cartoon was good and the toys fun, and I don’t doubt it. But I don’t know if can jump into an old property that I passed on as a kid. There might be some type of anti-nostalgia at work, I don’t know. For Voltron, I have a soft spot for ‘Vehicle Voltron’ but again, I’m not really that excited by Mattel’s announcement. If you are though, I hope that the lines can meet your expectations.

Maybe it was the timing of the two announcements that left me melancholy. Bandai had just let it be known they’d secured Thundercats, something Mattel’s customers had longed for them to acquire. So, Mattel announced they’d snagged Voltron. It was like a 1-2 punch for 80’s fans. There’s a lot of 80s goodness going on of course. Mattel’s aforementioned Classics lines. The handful of 25th Joes in the POC waves. Transformers is still going strong. Mattel holds Real Ghostbusters out there in the mists. There are still tons of 80’s toylines waiting to return to – Visionaries, Supernaturals, Power Lords, Captain Power, Manglors – but there is one that speaks out to me above the others. The one that I’m nervously hoping will come back one day. A toy line I really loved as a kid, C.O.P.S. ‘N Crooks! 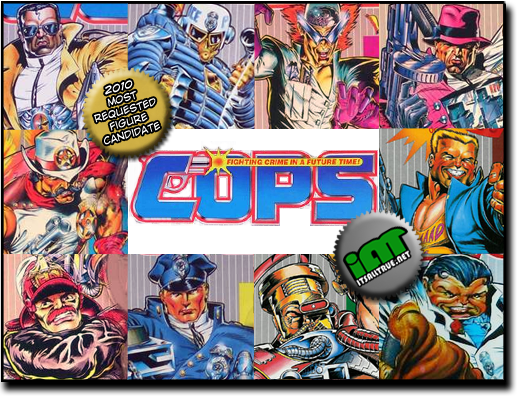 Fighting Crime in a Future Time. It was never really clear how far in the future time was other than being the far off world of the 21st century. ‘Future Time’ is rather vague. I mean, after I’m done writing this I’m going to be “Eating Breakfast in a Future Time”. But then, you’ll be “Reading in a Future Time” about how I had breakfast earlier. It’s all very complicated.

Anyway, if you’re not familiar with the line, it was basically like it sounds. C.O.P.S. was Central Organization of Police Specialists, an elite group of police officers who were brought together to take on the powerful crime syndicate run by Big Boss. The C.O.P.S. were all from various departments and the criminals were… well, they were rather insane. The line was created and released by Hasbro in 1988 and 1989. It was a roughly 6″ line, heavy on action features and cap-firing accessories, and consisted of about thirty figures and nine vehicles. In terms of articulation, they were basically a scaled-up G.I. Joe, sporting a ball head, ball shoulders, bicep swivels, elbows, wrists, rubber band waist, t-bar hips, and knees. The cast of characters was eclectic, but the real street cred for this line comes from the bios – they were awesome. And were written by none other than Larry Hama.

The line was supported by a cartoon that ran for 65 episodes and a comic book series. I haven’t watched the cartoon in years, so I can’t tell you if it would stand up to modern viewing, but I loved it back then. And I loved the line too. Officer Bowser, with his robotic K-9, Blitz, the S.W.A.T. Officer Barricade, the U.S. Marshal Sundown, Dr. Badvibes and his exposed brain, and my personal favorite – Buttons McBoomBoom. As if his name weren’t cool enough, he wore a snazzy bright purple suit with a removable hat and a tommy gun that he carried in his guitar case. But the catch was that he really didn’t need the extra gun because Buttons was more than he seemed. His chest flipped open to reveal cybernetics and a pop-out machine gun! That was the coolest thing when I was eight. Heck, I think it’s still pretty cool now. In the cartoon, Buttons was nearly invincible and that made the toy that much cooler.

Hasbro created C.O.P.S. ‘N Crooks from the ground up, so a return should be firmly in their hands. They got close once, sort of, in the early 90s. The Joes ventured into police territory with the Drug Elimination Force. That line saw a handful of the C.O.P.S. codenames reused (Bulletproof, Mace, Longarm), but the characters were different people. I still played with Bulletproof like he was the same though – as if he’d been in the military before the accident that left him a cyborg in a “future time”.

C.O.P.S. is still on the minds of it’s fans too. Two-thirds of the show has been released on DVD, the second volume just recently. And as any great toy line does, there are more than a couple fan sites dedicated to it. I recommend the C.O.P.S. HQ Archive over at GeneralsJoes.Com for great pictures of all the toys as well as information about the line and it’s tie-ins.

This line’s return may not be as heavily demanded as others from that era, but maybe it’s just early since we’re still a few years away from a 25th Anniversary. I’d love to see the line return properly, but I’d also be content if Hasbro folded C.O.P.S. into the Joe line like they did Matt Trakker from M.A.S.K. They’d be sharp in the smaller scale and the Larry Hama histories are practically written to fit in the Joe mythos. And with The Hub, Hasbro should be looking into mining their past lines anyway. What better than cops and robbers?

And maybe… just maybe… I could finally get the greatest unproduced villain of all-time: The Great Felloni, the criminal stage ventriloquist and his Buttons McBoomBoom dummy!