On Tuesday, we reviewed two of the new Lego Prince of Persia sets for the upcoming film (in theatres next month). The second part of our Lego Prince of Persia reviews focuses on The Fight for the Dagger (#7571). As before, I’ll keep the level of information on par with what you would see in a trailer. This set is at the $30 level and contains 258 pieces. I have to say, out of the three I’ve purchased so far, I was most impressed with this one. 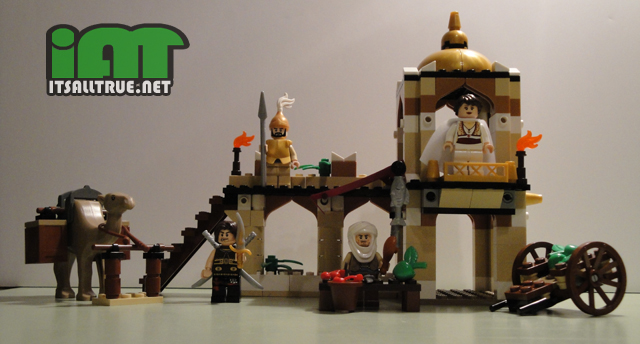 First up, this set comes with four minifigures. You get the ever-present Dastan figure, this time with his shirt on. Next is Princess Tamina. She features new printing on her torso, a new head (with a happy face and an “annoyed at Dastan” look), then there’s the brand new hair piece. I really like the braid in back with the shorter hair in front. It gives a cute look to the overall figure. 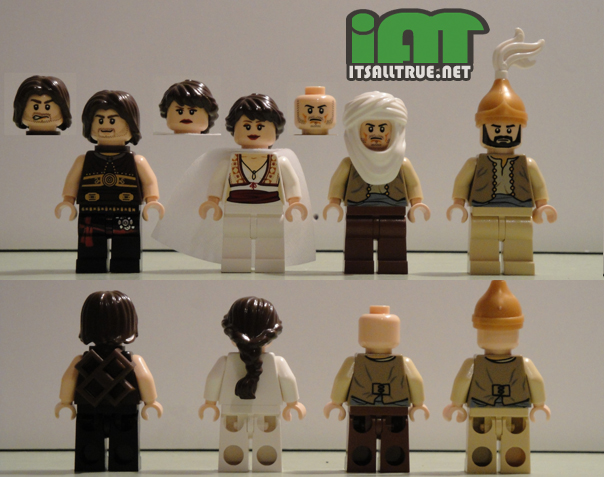 The merchant is an interesting addition to this set. Instead of a second bad guy, they went with an annoyed proprietor. He’s only got the one face, so he’s having a bad day at work no matter what happens. Last, there’s Asoka, the villain for this set. There’s not a lot new on this minifigure. He has a new face, but he’s got the same torso as the merchant. It’s disappointing, but it’s not too big of a deal since his armor will keep it covered most of the time. What I was impressed with is the new Arabian Helmet piece. It reminds me of a similar fan-made piece that was made much earlier. (Check out Brickforge to see what I mean.) 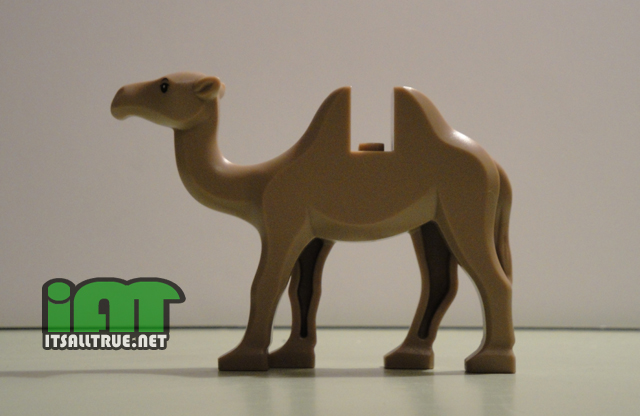 This set also marks the appearance of another first in the Lego animal family, the camel! The camel looks great and can be outfitted with a standard horse saddle so he doesn’t look as weird when your Lego men ride him. I really like this sculpt, but I was disappointed that he doesn’t have a single movie part. I was expecting him to be like the horse or cow and at least be able to move his head up and down. Sadly, this camel’s going to die quickly unless he’s handfed. 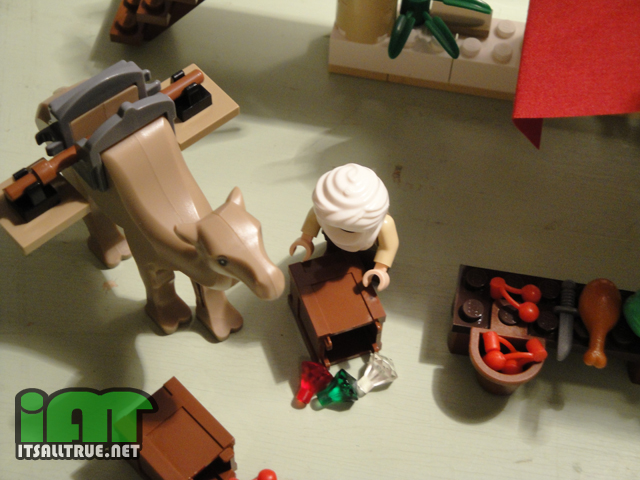 Another thing I was impressed with is how many accessories are in this set. The merchant is loaded with goodies to sell: two fish, three apples, six cherries, a chicken leg, and two knives. In addition to his stick, there are also three jewels, a spear, a whip, Dastan’s twin swords, and the most important accessory, the Dagger of Time. The Dagger has its own unique mold and matches the movie. 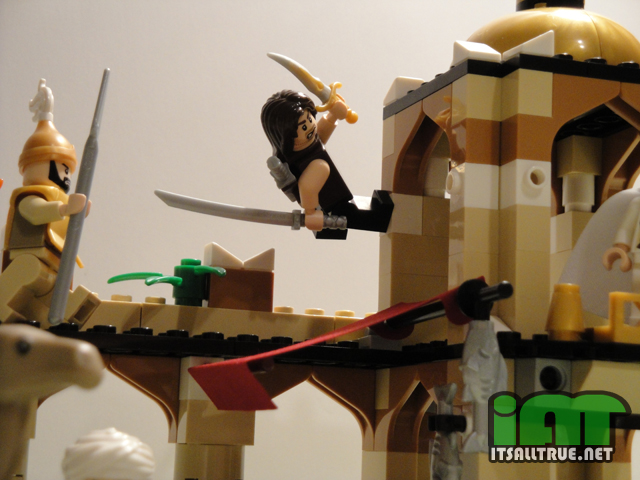 Lastly, there’s the play set itself. This set isn’t very big, but it’s packed with features. First off, I have to mention the special bricks with studs facing out that are placed around the set. These special bricks allow you to attach Dastan (or any minifigure) in various poses to mimic his unparalleled parkour ability. If you’re familiar with any of the Prince of Persia games, or seen the movie trailers, you’ll know what I mean. Nothing is really an obstacle to Dastan. 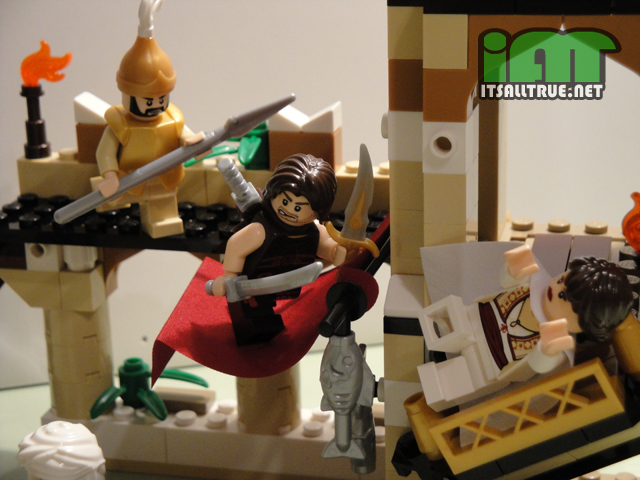 The set also has a piece of fabric stretched out as a canopy for the merchant. The fabric is only attached on one side, the other sits loosely on a pole, which lets a figure fall through the canopy to the ground below. (This is probably why the merchant has such an annoyed look on his face.) The canopy isn’t the only way for Dastan to make his way to ground level though. The second level features a working trap door and a collapsing balcony (both are held in by removable rods). Like I said, for such a small set there are a lot of play possibilities. 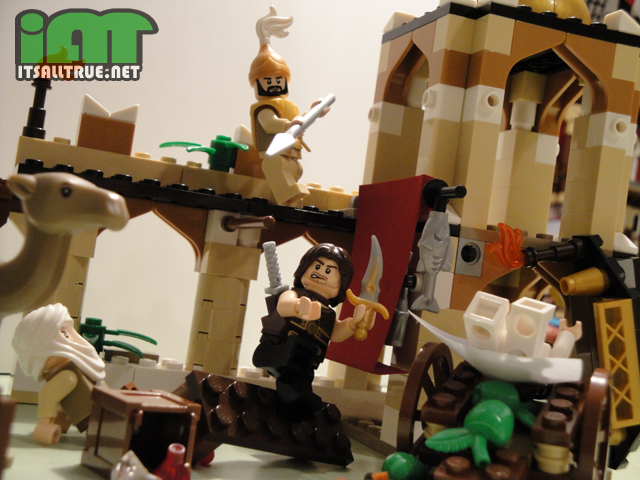 So far, this set is my favorite from the Prince of Persia line. If you only want one Prince of Persia set, I’d recommend this one. It’s only thirty and for that price you get plenty of features and accessories, two of the main characters in Dastan & Tamian, and the Dagger of Time. Three important elements to the film’s story. And, most importantly, a Lego camel to add to the ever-growing zoo. 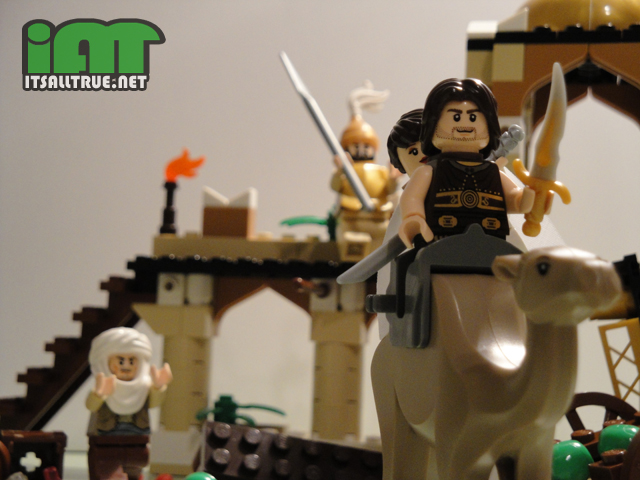 6 thoughts on “Vault Review: LEGO Prince of Persia The Fight for the Dagger”