After 20 years, Prince of Persia is finally making the jump from video game to silver screen. A toy line was a given, but I was excited to hear that Lego also picked up the license. I found a few of the sets at TRU this week and have them up for review. Since the movie hasn’t hit theatres yet, I’ll keep the level of information on par with what you would see in a trailer. For this review, I’ll be taking a look at #7569 Desert Attack & #7570 Ostrich Race. 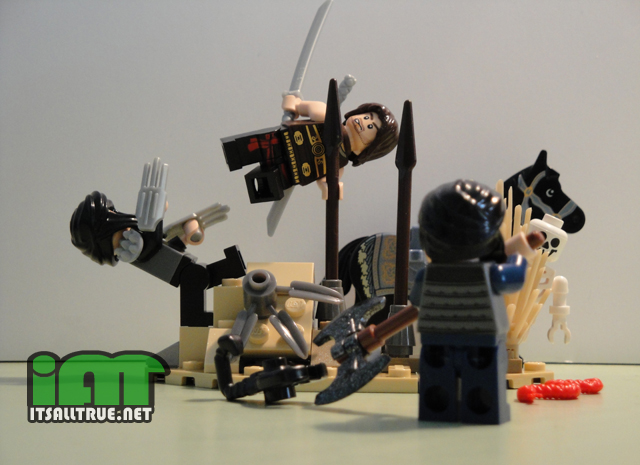 First up, we have the smallest set in the theme, Desert Attack. This set contains fifty-seven pieces and clocks in at about eleven dollars. The set is a pretty good deal for an impulse buy or if you’re just “trying out” this new theme. What makes it a great deal is the four minifigures it comes with: Dastan, a Claw Hassansin, a Hatchet Hassansin, and an unfortunate skeleton that warns of past failures. 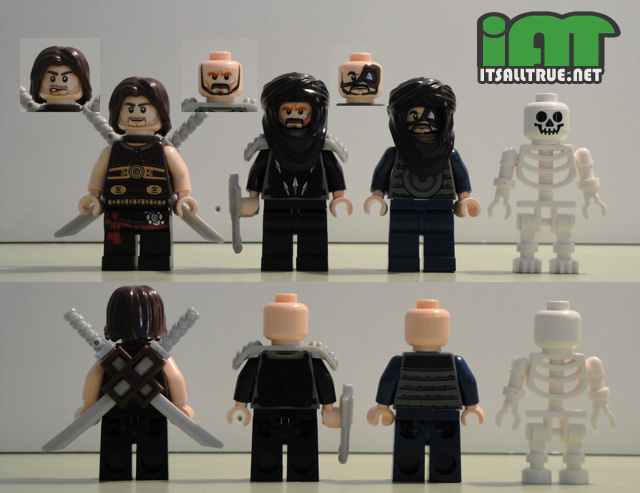 I have to admit, I am most impressed with Dastan. Not only has the Lego Group captured a caricature Jake Gyllenhaal’s cocky smile, but the back of his head gives us a similarly accurate angry/fighting face. Coupled with his new wind-blown “hero” hair, the minifigure springs to life with emotion. But that’s just the head. I was also impressed with the printing on Dastan’s costume. It’s incredibly detailed with intricate patterns, gold highlights, and a sash printed around his waist. Last, is a new piece designed to hold both his swords. I know that the Ninja’s from years back had a clip to hold their weapons, but this double scabbard is an improvement. It fit on the minifigure like a normal backpack, but it doesn’t take up that much space and keeps the figure from looking bulky. And it’s angled just right to allow him to ride his horse without problems. He’s a standout in a set with some nice minifigures. 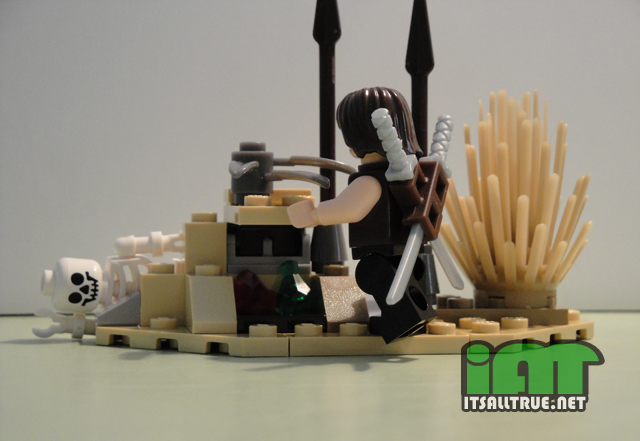 Even though Dastan is my favorite, the Hassansin’s turned out great. Each one has a different costume, which is a nice touch of individuality you don’t always see in Lego army builders. Each figure sports a unique face, with what looks like metal pieces that are either scarred or covering up parts of their heads. Unfortunately, the turbans hide these details slightly. The Claw Hassansin comes with two Wolverine-like weapons. Finally, there’s the skeleton, which isn’t anything special. Typically, Lego doesn’t count the skeletons as minifigures, but I am for this review. I did find it interesting that he comes with the dangling arms instead of the articulated ones. I guess that’s to point out he is actually dead unlike some of the other Lego skeletons. 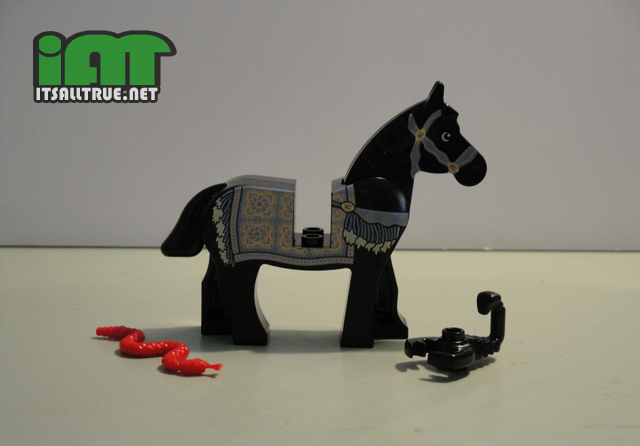 This set also includes a scorpion and a snake, which we’ve seen before, and Dastan’s horse. Even though the horse is the traditional mold, it has an impressive, detailed print of a bridle and covering across both sides. The intricate pattern is reminiscent of a Persian rug down to the tassels. The only thing, I found disappointing was that the printing didn’t cover the horse’s back. 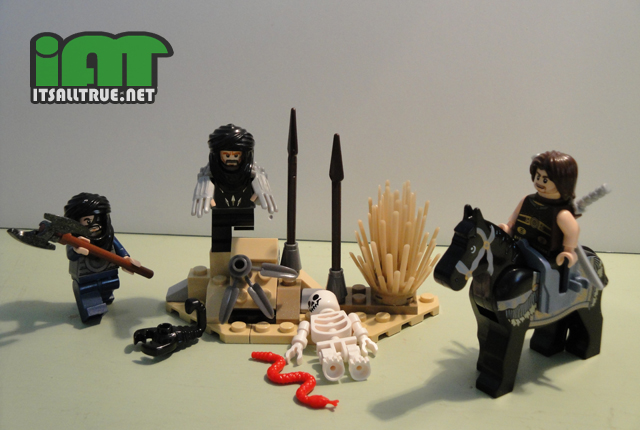 Last, we have the “playset”. This is such a simple piece that it was almost an afterthought in a set I bought for the minifigures. It does come with a brown bush and gray plant, which you don’t see in those colors too often, and there is a hatch to open up and discover treasure (or a scorpion if your character is unlucky). So it’s not all bad, but it’s definitely not what you’re buying this set for. 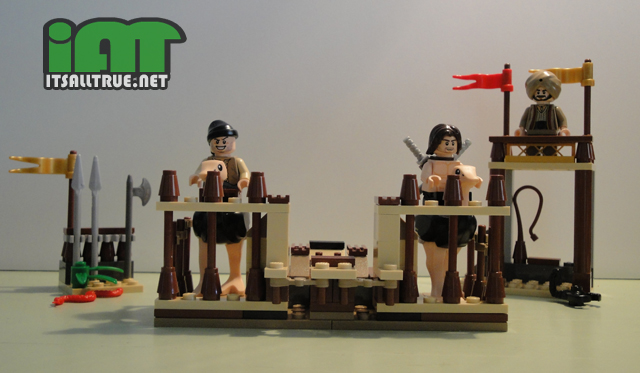 Next up we have the Ostrich Race. This set costs about twenty dollars and contains 169 pieces. I think the biggest draw in this set will be the ostriches. This is the first time Lego has made an ostrich, and it turned out great. Not only do they add some well needed animal diversity to the Lego world, but these guys are articulated. I’d expected them to be one molded piece, but they have a cut joint at the base of their necks that allow the head/neck to turn. I have to say, I really appreciated this little bonus. It really gives the ostriches a little personality. 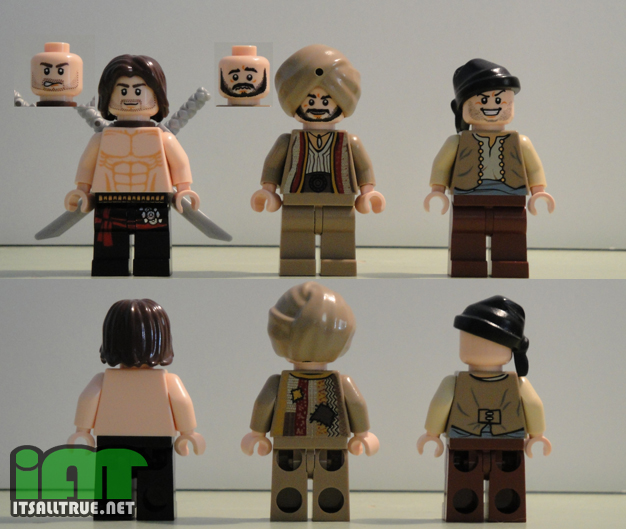 Another reason people are going to pick up this set is for Dastan’s naked chest piece. Before now, people had to pay fifty dollars for the Lego Indiana Jones “Fight on the Flying Wing” set to get the half-naked German Mechanic. That adds up when you just want a few shirtless minifigures. But now, for a much more reasonable price, you can make any Lego man the “Hero of the Beach”.

This set also comes with the Ostrich Jockey, who seems a little cocky if you ask me. Maybe it’s because he’s got that cool black pirate cap on? Or, it could be his snazzy jacket with the gold buttons? Either way, I don’t think Dastan is worried. 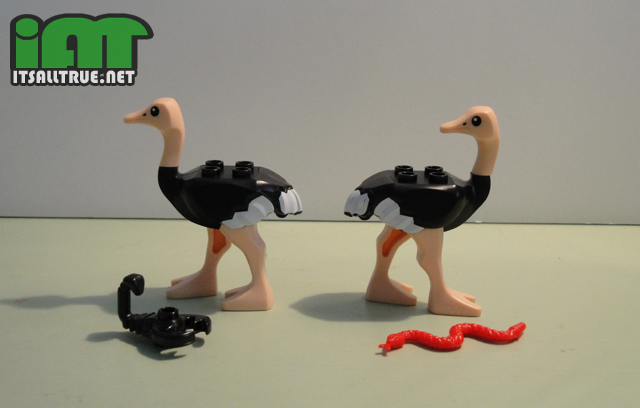 Then there’s Sheik Amar. Something tells me Amar puts a little too much faith in his unnamed Jockey. Why else would his other face be so sad? Maybe he’s not happy with the only clothes left in his closet. I love the detail on his clothing. From the front, he’s a well respected business man, but from the back he looks like a homeless ragamuffin. The detail on the pattern and stitching is great to see, but it makes me wonder why a Sheik can’t afford better clothing?

Another small thing I liked was the new mold for the whip that came with this set. Unlike the Indiana Jones whip that was curled, this one’s unfurled. It’ll make a great piece for carriage drivers or vampire killers. Plus it’s a lot more practical for display than the curled one.

Something else I was impressed with is that the ostrich corrals have an action feature. There is a lever that runs down the middle, separating the two pens. When pulled back, both pens open, starting the race fairly. No Ostrich Jockey cheating here! 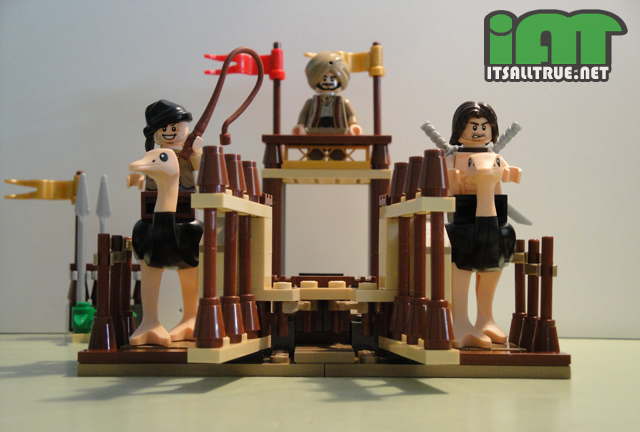 All together, this set is definitely worth twenty dollars. Admittedly, unless you’re really into ostrich racing, there isn’t much here playset wise, but you still get a lot of unique pieces , accessories, and figures to make it worth the money.

Hope you enjoyed our reviews of the first two sets of Lego’s Prince of Persia. I’ll be back on Thursday with the next Prince of Persia review, #7571 The Fight for the Dagger. 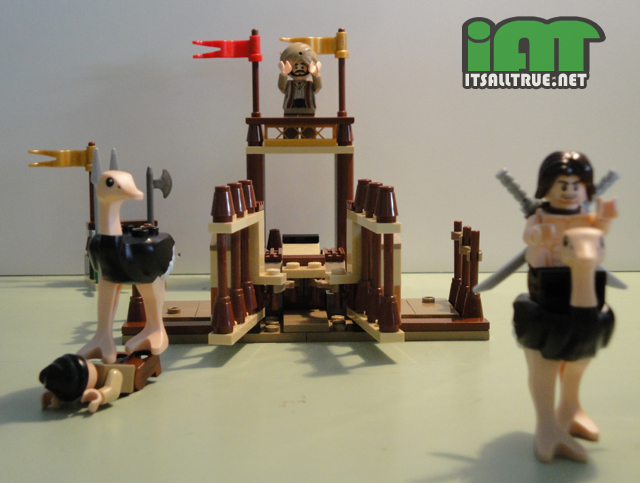 10 thoughts on “Vault Review: LEGO Prince of Persia The Sands of Time”