Superman/Batman: Public Enemies. Remember that movie? It came out in September 2009. Six months ago. And roughly six months ago, we reviewed Wave One of the figures from the movie. Mattel wasn’t exactly clear about the figures being split into two waves until around the time they hit and that left many fans unsure of when they would be able to complete Brimstone. For me, that was a few weeks ago. Our Target, after five months of sitting on an Icicle and a Banshee, received a case of wave two. I was lucky enough to snag the one Black Lightning and the one Major Force. 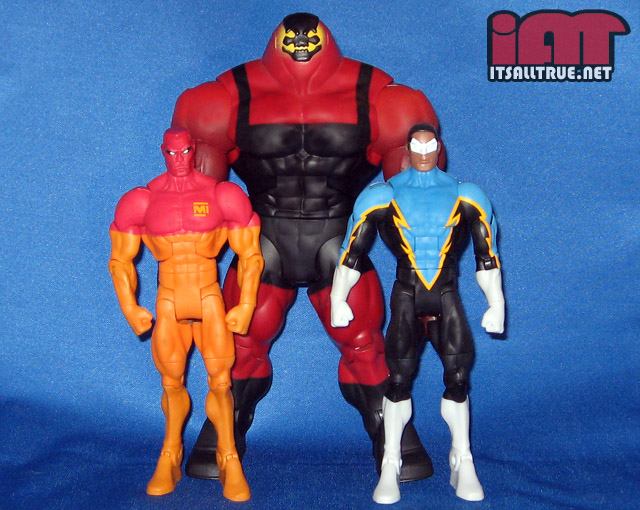 Public Enemies Wave Two wasn’t exactly the most successful Mattel endeavor. First, through no fault of Mattel’s, the movie was awful. Some of you may have liked it, and I appreciate that, but when the IAT staff gathered to watch it, we basically lambasted it from titles to credits. Then, the first wave of figures didn’t show up in time for the movie’s release, arriving about a week late. That same week, Mattel made an offhand mention that the figures would be split into two waves in photo captions. To make matters worse, Mattel didn’t seem to know when the second wave would be released, but they hoped it would be soon. Well, weeks turned to months. Fall turned to winter. 2009 ended. 2010 began. And finally, in Jan/Feb, reports of Wave 2 started coming in. It would take another month for them to reach the IAT Target, but I was excited to not have half of Brimstone sitting around any more. 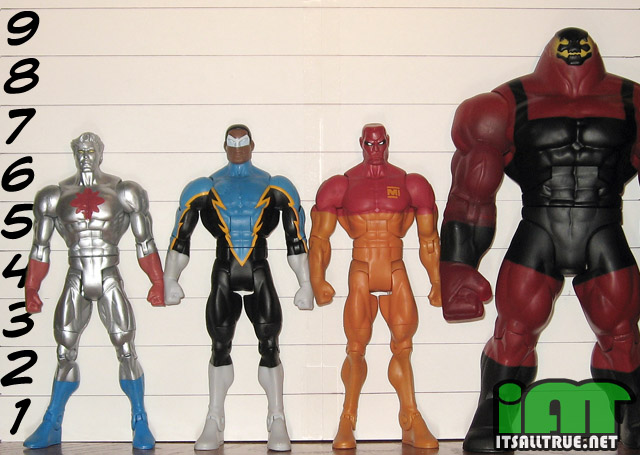 I’ve often gone on record as saying that Mattel can’t make characters that I don’t want. I’m ready for Lady Cop and Blackwing. And while I would have been happy to buy Major Force and Black Lightning (even in his third best costume), I didn’t want to buy them this way. I like that the PE buck is bigger, though Mattel doesn’t seem to want to use it again on 6′ 6″+ characters,* but I don’t like the way the crotch piece is done (check out those gaps), I don’t like that the PE line lacked sculpted details, and I don’t like the head sculpts. So why buy them? Unfortunately, Mattel had me at Brimstone. The Engine of Destruction has been a favorite of mine since I was seven.

* – Blue Devil should have used a PE buck and so should the rumored Martian Manhunter and Jemm. 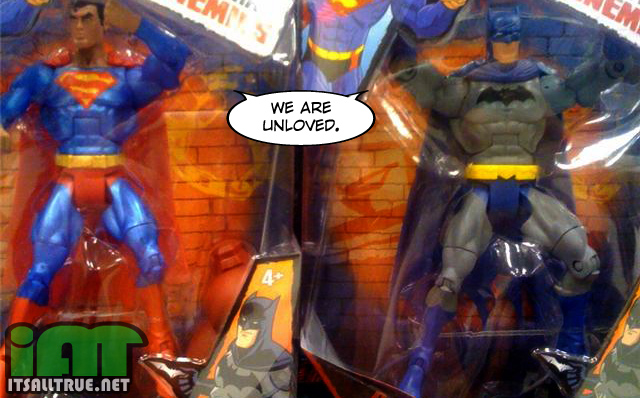 But one thing I wasn’t hosed on were the two guys above. Yes, I had to buy the first versions of Superman and Batman for the Brimstone parts, but I wasn’t about to pick up their variants. We may still have a review of these two if another IAT staffer uses them to finish their Brimstone. Until then, this is as close a view as we can offer. I do have to admit that the blue version of PE Bats does look better than the black one I bought, but its six months too late to do anything about it. Maybe Vault or Rant will trade me instead of burning them in effigy… 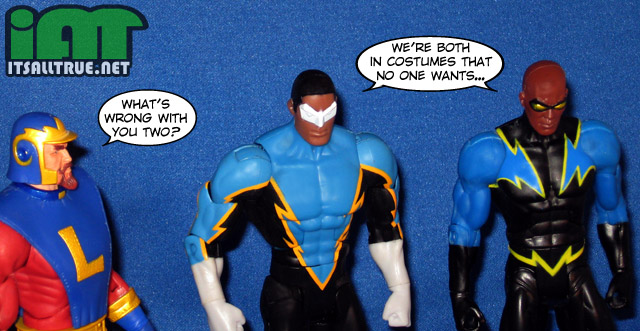 Above, I said this Black Lightning figures sports my third favorite BL costume. I’ll always want his early 90s look (that made it into the Total Justice line) first and foremost, and failing that I’d like to see him in his classic duds. I do like the late 90s look given to the PE figure better than the modern costume on the wave five release, and admittedly, his animated head is one of the least exaggerated in the whole line, but neither of the two released really say “Black Lightning” to me. But is a third Black Lightning in the cards? I don’t know.

The articulation on BL is standard, though his head is restricted to left/right swivel only. Some of the joints are really tight, but all have good range. Paint was an issue on Black Lightning, it’s hard to tell in the pictures but there are noticeable smears/brush lines on his right side of his chest. I did see this in the package, but shamefully, I bought it anyway because I wanted to complete Brimstone and didn’t really care about the figure. Plus, it’s the only one I’ve ever seen. Don’t worry, that’ll bite me before the end of the review… 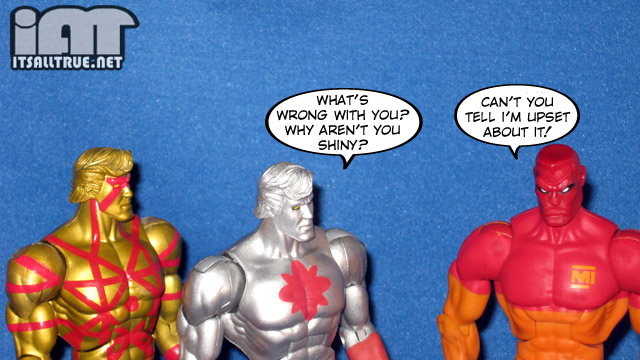 Major Force isn’t a favorite character of mine, but he’s important as Captain Atom’s nemesis and as a part of Kyle Rayner’s rogue’s gallery. Yes, it was Major Force who infamously shoved Kyle’s girlfriend Alex into a refrigerator.

Again, the articulation here is standard with tight joints and the head is restricted to left/right swivel only. He has no noticeable paint issues other than I wish he were done in a metallic color scheme like Captain Atom. I like his colors, but I’d like them more if they were shiny. Even though the head isn’t what I’d like, I don’t see a regular Major Force ending up in the line, so he’ll have to do for now. 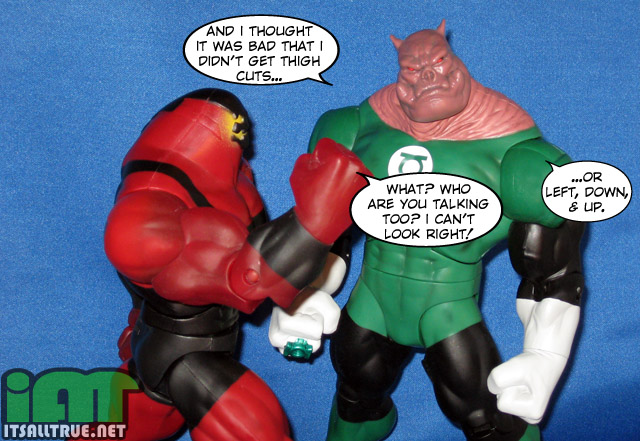 Finally, we get to the part of the review where I’m excited to have something! I first discovered Brimstone in Fury of Firestorm #55 where he fought off Firestorm and got away. Exciting, right? That issue summed up part of the Legends crossover, so I had my parents help me track that down to find out what happened to him (he ultimately got taken out by Deadshot). Brimstone is essentially a “techno-seed” that gives sentience to super-heated plasma and takes humanoid form. New Brimstone’s have been created a handful of times since the first one was destroyed, most recently in the Public Enemies comic that the animated film was adapted from.

Sadly, Brimstone the C&C didn’t live up to my lofty expectations. I already knew what most of the problems would be before I completed him. Like Kilowog, he lacks thigh cuts, but he also lacks any type of head articulation, Mattel choosing to keep his upper torso and head one piece. His arms are molded in a translucent red plastic, which was a great idea, had it been done with the entire figure. Unfortunately, only the arms are done this way and the rest of the figure is solid red. The fade on the shoulders is done well, but the overall piece looks somewhat off.

Finally, as toy karma for paying good money for a messed up Black Lightning, my Brimstone is not painted correctly. The black areas that comprise his face/hair details aren’t fully painted. The lines are smooth down the back of his head, but the “sideburns” – you can see them raised in the pictures – went untouched. It’s an easy fix, but it really puts a hit on my excitement over finally being able to put him together. 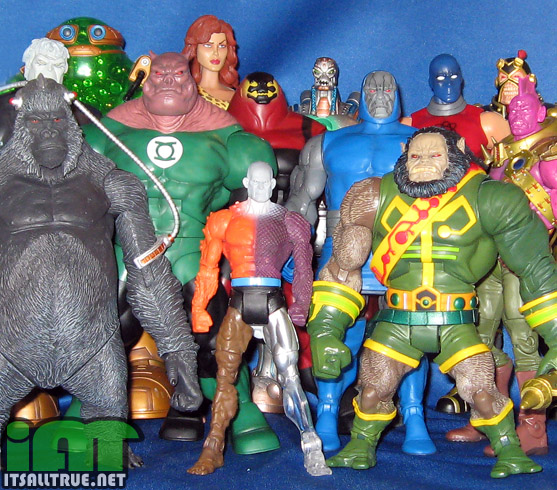 And scale is also an issue. Brimstone is a 50ft tall monster and I wish Mattel would have made the commitment to at least take him to the upper limit a C&C can be – ten inches – but he clocks in at only 8.5″, making him smaller than even his shared body buddy, Kilowog. Annoyed at the height disparity, I set out to showcase the different heights the C&C’s would be in an ideal and unrealistic line.

Below, I have an image in which I’ve photoshopped the C&C’s to their relative heights to get a sense of how big they should be in relation to one another. Obviously, some of them would have to be over 8ft tall to be in scale (how awesome would that be!), so this could never happen, but I do wish Mattel would have implemented a better plan to represent the various heights. 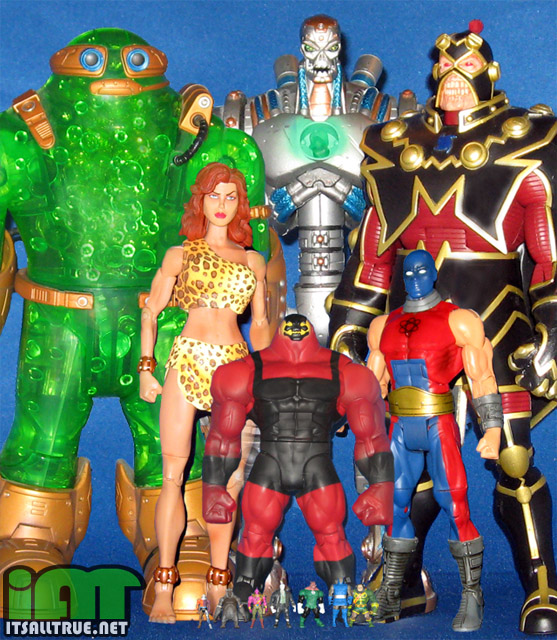 For the image, I followed the listed heights in the DC encyclopedia for Metamorpho (who represents a standard size DC figure), Grodd, Despero, Solomon Grundy, Kilowog, Darkseid, Kalibak, and Brimstone. The other characters are all able to change their height. For Atom Smasher and Chemo, I chose their upper limits of sixty and a hundred feet respectively. For Giganta, her height capability has never really been set. The encyclopedia says she can grow to “hundreds of feet”, but I think that’s silly. Can you imagine her three times as big as Metallo in that picture and not find that absurd? I arbitrarily chose 75ft for this image because that’s about the right height for a Wonder Woman necklace. Finally, Imperiex and the Y2K Metallo don’t have listed heights, but McGuiness drew them both with heads about twice as tall as normal human, so I’ve placed them both at roughly 100ft.

Again, I’m not expecting Mattel to put out a 4′ 2″ Brimstone, but I would like to see them do a better job at choosing representative heights in the narrow range their budget allows. On that note, I’d like to see the Anti-Monitor break that range and be a 12″ figure, but failing that, I hope they at least do him at the uppermost limit. Anything less just wouldn’t be right. 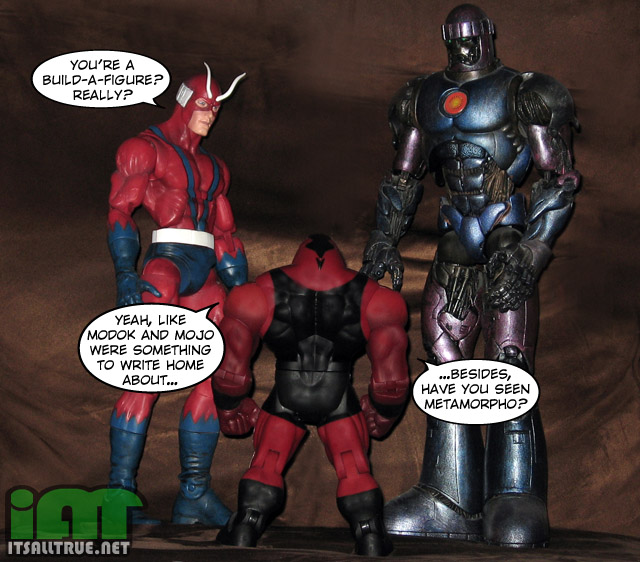 In the end, I have to remind myself that even though I don’t like the animated heads on these figures, many of them were accurate to the cartoon like they should’ve been. In a sense, maybe we weren’t supposed to mix PE and DCUC, but when the bodies are essentially the same and it’s likely the only way to get the Brimstone C&C, how could we not be expected to mix them?

While the animated heads do make them stand out from the other figures, I’ll still be adding Major Force, Silver Banshee, and probably Icicle & Black Lightning into the general DCUC population. And while Brimstone is spared an animated look, he still has problems that keep me from really endorsing him. Despite that, he’ll get some added paint details from me and be proudly placed on my shelf. But I might be the only guy that wanted a Super Powers figure of him twenty years ago, so I admit bias for a flawed figure.

Still, with the prices on DCUC going up, Mattel needs to avoid a flawed C&C packed across a majority of unwanted characters. I’m hearing that some Targets have moved the price of DCUCs up to $17. Had the Public Enemies line been released at the price, that would put the cost of six figures and Brimstone over $100. That’s well past too much for a bunch of figures that few seem to be keen on and a C&C that’s not at his best. At these prices, it’s getting less and less likely that collectors will be willing to pick up figures they don’t want to finish C&C’s. I’m curious to see what Mattel’s got up their sleeve, besides buttons, to try and keep us hooked going forward.