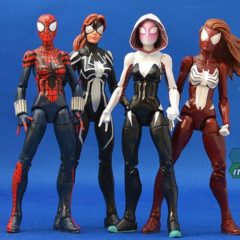 With that out of my system, let’s move on because there’s good stuff here. She has enough accessories for a coupe different looks: masked & unmasked. In full gear, you’ve got the hood and the masked head. I’ve mostly stuck with that on my shelves. There’s also the unmasked head which creepily looks like Emma Stone. She was Gwen Stacy in the movies recently, so I get it. But it’s still weird. It’s not like the movie Cap looks like Chris Evans, y’know? Zing!

The neat part about the unmasked head is that the last accessory is the hood folded down. I love this. It’s the kind of little detail that you want and that lets you know someone up at Hasbro cared for a few minutes. I do wish we got some alternate hands here. She’s kinda stuck in that zone where Spidey used to be where we’ve got to get the fist & thwip hand locked in. It’s frustrating because there are other hands on the figures that share this buck. If they were all just removable?

The articulation is the one way the buck frustrated me a little, mostly at the ball-jointed hips. They work fine, but I just have trouble for some reason. Lots of good articulation elsewhere: ball-joints at the neck, shoulders, elbows, wrists, and inverted ankles; swivels at the thighs and boots, double-hinge knees, and the torso joint. She can’t quite pull off as many good poses as Spider-man can, but there’s plenty of fun to be had.

The paintwork was probably the most important. Gwen has a 21st century digital costume and there was a lot Hasbro needed to get right. The webbing in the crimson areas for one, that’s on the higher difficult side. So was keeping the white white and the black black. But the purple overspray on the eyes was crucial. And Hasbro got all of it. They nailed it.

Overall, I’m pretty happy with getting the figure and happy with how well it was executed. It is the right buck despite my misgivings, the articulation is useful despite the limited hips, the newly sculpted pieces are spot on – even the unwanted Emma Stone likeness, and the paint work is near phenomenal for a mass-produced toy. And extra points to Hasbro for getting the figure out so quick. May Spider-Woman live on forever.

For all our Marvel Reviews, check out our Review Index.