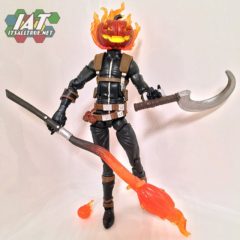 And here’s the other non-review for the Absorbing Man wave: Jack O’Lantern. This one was opposite of the Beetle in that I initially intended to keep him. He’s not the original Jack, instead based on a brief appearance of an impostor Jack O’Lantern, but I liked his look. I’d still want a classic Jack, but I loved the head sculpt. I thought I loved the lanky look too, but that proved to be it’s downfall. The body wasn’t new to Jack, I believe it was originally Ghost in an SDCC set, and that proved to be it’s downfall. I had a lot of trouble getting him to stand. It kinda reminded of the DC pre-Classics Scarecrow that was awesome, but a pain to display. Part of the problem was a pet peeve of mine: the hips pegs went up into the body at an angle instead of horizontally into the lower torso. That creates extra difficulty when posing and I’m just not fan. After fiddling with him for awhile and having trouble getting him to stay up for pics, I made the call. Room & money are tight and I just didn’t want to settle on this one as I have a few times before.

It’s a shame because the sculpt looked great. The reuse worked visually if not functionally. I love the head sculpt. I almost thought about keeping it in case some future Jack isn’t as cool. The paint was sharp. The accessories were a mix. I liked the scythe and the clear pumpkin, but the fade to fire on the broom started a little too soon. I still feel a little remorse looking at my one pic, but his departure was for the best.