The sculpt is well done. I think that’s the big thing with these reduced articulation figures. They’re not really mine thing, but the one advantage to less pieces (other than the price), is that the other areas like the sculpt & paint needs to amp up to compensate. The sculpt does that here. Little details, down to armor latches, can be found all over the figure. It’s appreciated. 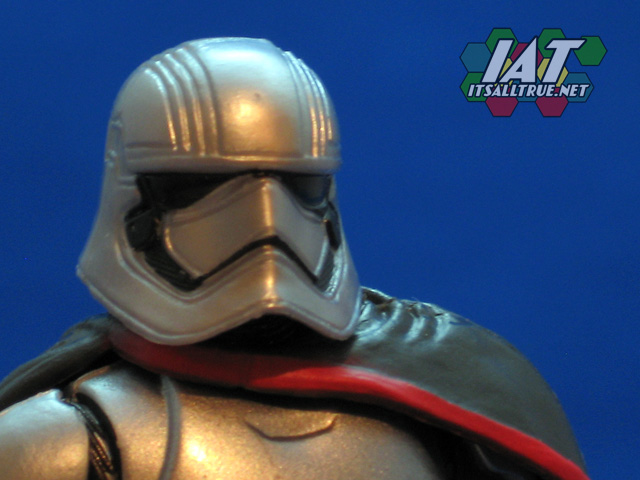 The paintwork was also pretty solid. There’s some slop here and there like on the feet & lower torso, but most of the black lines are done well, as in the red line down the cape. The only thing about the paint is that I shouldn’t have bought this silver pained figure. In the trailers, Phasma has a chromed, shiny armor and while this figures look good – you just know a vac-metal version will happen someday. That’ll be even easier on a 5 POA figure. I want that now! Truth be told though, I’m going to buy the 6” figure too and will probably say something really similar. 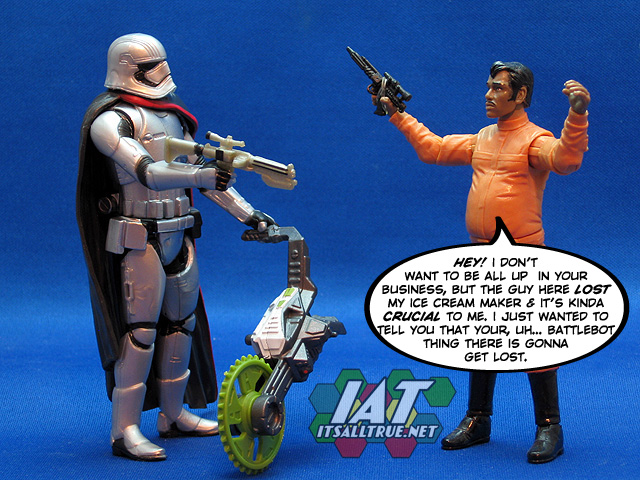 As I mentioned, this is a 5 POA figure – ball-joint at the neck, and swivels at the shoulders, & hips. So, if you’re not into that sort of thing, don’t buy this figure. The legs can bend to about seventy degrees while the arms are only slightly blocked by the cape (it’s pretty soft plastic). The helmet has a nice set of range on top of that one-piece ball neck.

Phasma included two accessories if you don’t count her removable cape. The big thing is the blaster cast in silver with some fine black detailing. It works and can be held in either hand. The other accessory is more complicated. There’s some battle-bot thing you can build if you collect groups of figures. In this case, Phasma is in a group with Ren & Luke. Get all three and you get this little battle bot that can fight another battle bot to the death. Well, I’m not really sure about that, but you can build the gear. Phasma got a two-handled buzzsaw. In the right hands, it could be deadly. 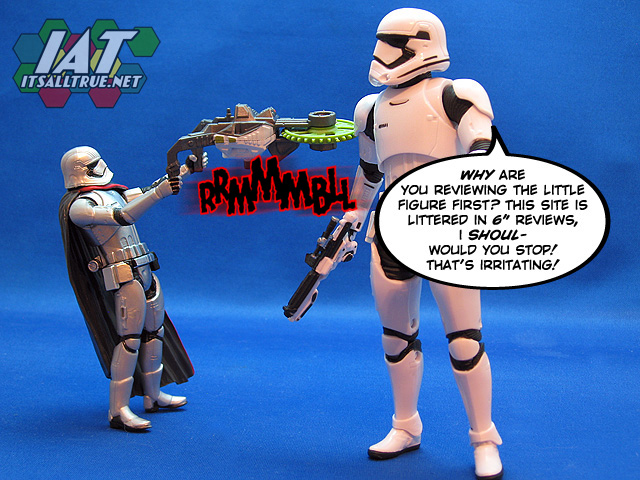 Overall, yeah I have a little bit of purchase remorse. It’s not about this figure though. The $6 was right. The sculpt is good, the articulation is fine if you’re ready for it, and it just looks sharp with the cape and paint. It’s a solid investment if you’re collecting the 3-3/4 line. For me, I just know I will replace it with a shiny version someday. It’s okay though because I’m gonna love this character. I don’t mind having Phasmas in different scales and having her in different shades of silver isn’t gonna be a big deal either.