I haven’t gotten a lot of them reviewed for the site (I haven’t gotten a lot of many things reviewed for the site), but I think the best toy line story come the end of the year will be the return of an old king, Marvel Legends. Hasbro has been on a steady incline since bringing back ML in 2012 and this year they’ve been killing my wallet with great figures!

I haven’t kept every single one (that’s how BAFs work…), but the Odin Wave, the Hobgoblin Wave, the Coulson 3pk, the Thanos Wave, the Ant-Man wave, the Hulkbuster Wave – I just keep buying these things! My ML shelf is pretty much Hasbro-dominant at this point thanks to their great Marvel Team. Hasbro hasn’t had their Marvel panel yet, but that didn’t stop them from debuting a new wave on the convention floor! With a new, and awesome, Absorbing Man as the build-a-figure, the next Spidey Wave is also scheduled to include: 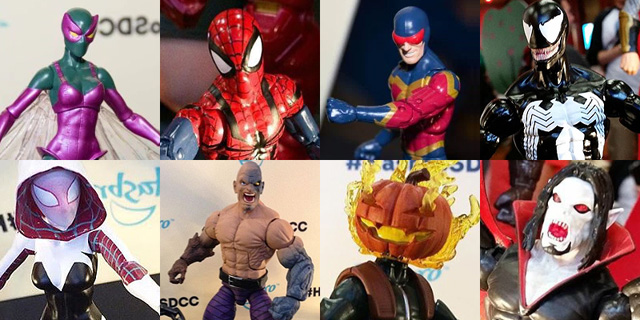 Janice Lincoln Beetle… okay, well one character I had to look up isn’t bad, the scorching-hot-right-now Spider-Gwen, the best Jack O’Lantern figure there’s ever been, an update of the Ben Reilly Spider-Man on the current fantastic Spidey buck, a long overdue update to Morbius (does anyone have one without a melted face?), a classic Venom (with no blue overspray, thank you Dwight!), and frikkin’ Speed Demon! He’s been such a longshot all these years that I don’t even put him on my want list. My first thought was that I basically made up this line up myself. We’ve got five figures easily replacing their older counterparts and three great first appearances in the line. It’s awesome.

For a ton more pics of the Absorbing Man Wave check out ActionFigurePics!

7 thoughts on “SDCC Armchair Coverage:
Hasbro’s Marvel Legends Draws Me Back In!”