I’ve been getting this same question over & over this weekend: are you going to do a ThunderCats Classic checklist? And I gotta tell ya – I’m not a big ThunderCats fan. I know Lion-O. I know there’s Tygra, who’s not the girl, and Cheetara, who is. There’s a ghost. And they fight a mummy. That about sums it up, right?

So why would I even be interested? Well, they are Four Horsemen sculpted, Masters of the Universe compatible figures. I feel like, at this point, I’d buy anything in that scale & style. I love the Batman and still want Superman (& Warlord) and a lot of the 80s properties would look great all matched up with MOTU. This could be interesting? 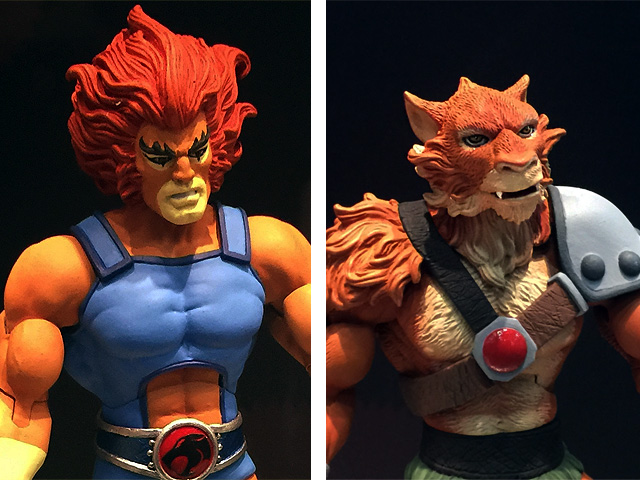 Pop Critica has coverage of the panel and the booth. We don’t know a ton just yet, but we do have a ways to go get there. Lion-O will kick the line off NEXT July, that’s 2016, and be part of a subscription including the already revealed Jackalman with a powered down Mumm-Ra as the subscription exclusive. It’s likely they’ll be four more figures, probably revealed at Toy Fair next year and the subscription will go on sale around that time.

It could be interesting times over at Mattycollector, where the new folks in charge seem to have finally realized it could be a useful outlet. Many other possible licenses were shown at the beginning of the panel as a huge “what could be”. Fingers crossed

For a ton more pics of Mattel’s Thundercats, Check Out Pop Critica!