So it turns out that there was some MOTU/She-Ra/Thundercats/TMNT convention this weekend? I’m kidding, of course. The “convention that could” has already grown into a large affair with the big companies taking notice, both Mattel & Playmates used the event to debut product, and a good-sized showroom that easily attracted tons of fans and many of the toy blogging community. I, as usual, remained in my nice little nest here in the middle of the country… I really ought to start going to these things some day, or y’all might start to think I don’t exist. That my articles & checklist are the work of 10 men. That the Armchair Coverage is done by the laborious hours of multiple internet users! That… oh, you probably want to hear about all the goodies at PowerCon.

There were some fun things in the booth like the
Sky High He-Man (via ToyArk) using Sky High as a pilot uniform, but for most of the homebound folks, we were all waiting on pins & needles for the new reveals. And while the reveals launched a thousand ships, half-excited & half-bellyaching, you can count me in the excited camp. We have three more reveals to add to the 2014 schedule. This April will feature the movie-based Evil Master of Swords, Blade! And he looks damn cool (via AFI)! He was one I figured the 4H could knock out of the park, but even I wasn’t expecting the little masterpiece. He would be followed up in May by a great rendition of the Horde’s Scorpia (via Fwoosh).

The big “controversial” reveal was the second quarter beast, Battle Lion! I am so happy about this reveal, it’s not even funny. I do wish he were bigger (he was ginormous in the cartoon), but the sculpt on this guy looks fantastic (via AFI). He’s going to make a great addition to the shelf. I’ve been a bit worried about MO2K in light of the “vintage A-lister” nonsense spouted the last couple years and it’s great to check this off my short list. Seriously, I did a little Battle Lion dance and no it won’t be on YouTube.

As always, Mattel is always good for a tease about the next convention and while I really, really need to know when we’re going to get Rio Blast, Mattel did a tease almost as good with a little red, fold-out shield appearing in the booth not too long after the panel reveals. If you know you’re MOTU, that’s an easy spot as the shield for Extendar. If I wasn’t stoked for… NYCC? Toy Fair? Whenever they reveal the next batch, I am now. I just hope I haven’t built him up too much in my mind…

Mattel also threw a curveball at the fans with the possibility of a MO2K Head Pack. I’m not totally sure the details as we’re relying on a lot of second-hand reporting even still, but there was a slide (via AFI) that showed Mattel was soliciting requests for characters that could really use a second MO2K head. This is also totally awesome and something I really hope comes to pass. We need to know more?! How many heads? Who are we allowed to choose from? Where do we vote? I thought a bit about it and the first five that sprang to mind also just happen to be the five that’ve received the highest vote tally in a thread at He-Man.org, in no particular order those are: 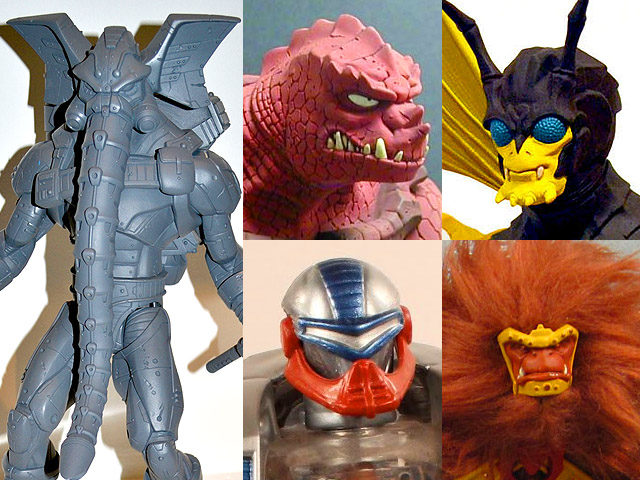 In retrospect, some of those would be better served with better figures, Roboto would be a good example, but I think these cover the bases well. Of course, Mattel might (won’t) need to look into a second run on some of these guys too. I’d want both Buzz-Offs & Snout Spouts (I’m weird that way, but I’m not ashamed!). I’ll be interested to watch all this unfold.

There’s one other thing I wanted to touch on. Mattel showed these slides at SDCC, but I wanted to give them another shout out here. They’re slides featuring character artwork for new characters: Bandwidth & Red Shadow, Great Black Wizard & Fang-Or, & Gladiator & Spectormobile (all via AFI). Now the Spectormobile is just a tongue-in-cheek joke, but some of those others would make amazing figures. Hopefully, someday Mattel can get to them as toys. That’d be great!

To wrap up MOTUC, a couple new pics show a fun feature on the new Castle Grayskull. The Skulls atop the elevator poles will be swappable heads (via AFI). It kinda makes me wish Mattel would throw in a third one, because that’s kinda cool. This is the fun stuff that makes the line great. We also got our first look at the Castle Grayskull Bio (via AFI).

Anything else MOTU left? How about the amazing Icon Heroes Snake Mountain (via AFI – & more pics (via ToyArk). I don’t need these smaller statues, but they do look amazing. I’m jealous.