The shining example of the sculpt is the face though and it’s funny because Maul is pretty much the opposite of Luke. Whereas Luke came out a little animated/soft because of the goopy paint, Maul’s sculpt is eerily lifelike and better captures the promise of this scale. He’s like a “not-as-little” version of the real Maul staring back at me from the shelf. 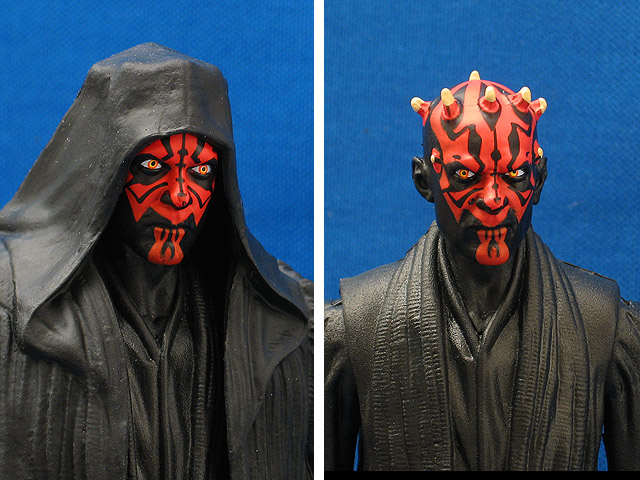 Very little paint work was required on the figure’s body, but the head is no small feat. Unfortunately, that almost meant I ended up with some issues on my Darth Maul. I think they’re kinda lost in the complexity, but the crookedness of the nose tattoo and the slightly askew left eye can be distracting. It’s not as big a dealbreaker as some of the slop I’ve gotten on recent figures, but I might be tempted if I run across a better Maul at retail. Of the ones I’ve seen in the wild, the smudge factor has varied, so keep an eye on those tattoos if you run across him. Similarly the horns just aren’t quite as fully painted as they should be. It also more or less blends out, but I kinda want to go back and repaint them to down to the base of the skull like they should be. 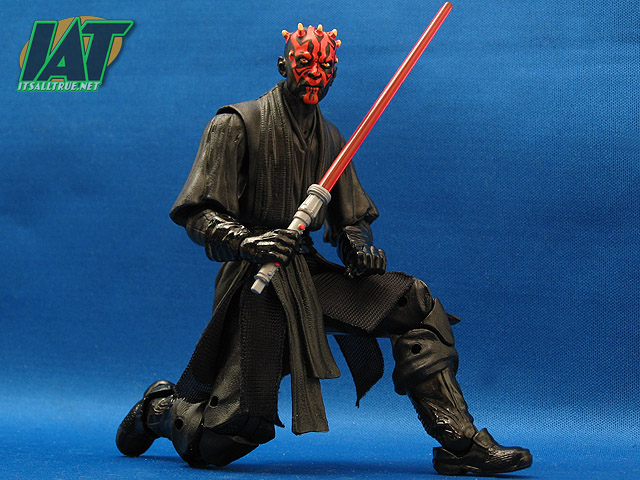 While Maul isn’t as articulated as the Sandtrooper (I really want bicep swivels, darn it!), he probably makes most of the articulation used on the first wave. The ball-jointed head, shoulders, elbows, wrists, torso, hips, and ankles combine with the double-hinged knees and the swivels at the thighs to give Maul some of the best range a figure can get. It’s a blast to get some signature Ray Park moves out of him! The range is good throughout, but I think it’s the really well done (and well concealed) torso joint that makes the figure really come alive in certain poses. Right now he’s balanced on one foot getting ready to do a helicopter kick. He’s just a lot of fun to play with, though there is just one thing I really wish the figure could do… 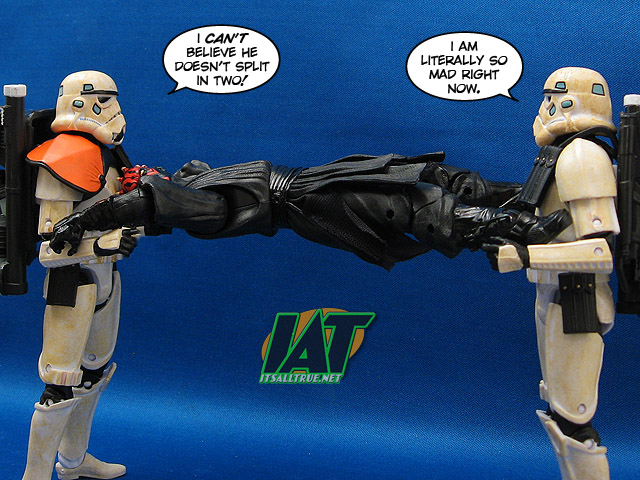 Like the other figures in the wave, Maul comes with a bunch of cool accessories. There’s the aforementioned extra head that transforms the figure between two lucks, the binoculars he used when he first landed on Tatooine, and this his trademark dual-bladed lightsaber. This is the cool piece of course and it does just about everything you want but light-up. It splits into two pieces, the blades are removable, and it can be stored on the belt. The only drawback here is that’s a little softer plastic than I would like and does contort a bit in dual-handed poses. 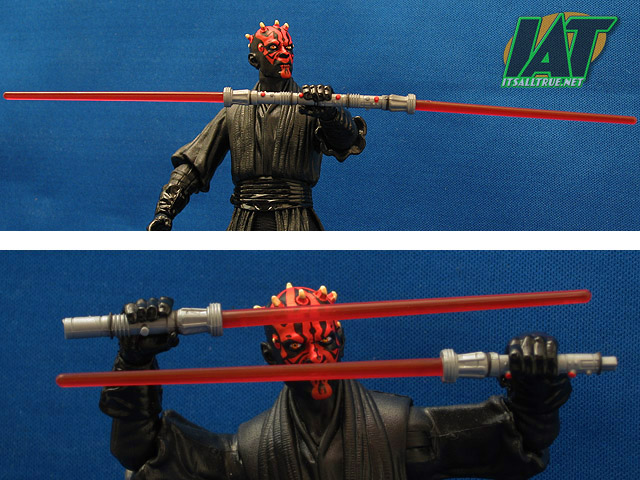 Overall, Maul is just another excellent figure in a star-packed first wave. I know I’ve been a bit gaga in the reviews so far, but it’s good praise. Marvel Legends, DC Classics, even MOTU Classics, all came strong with their first offerings, but there were lessons to be learned. Improvements need to be made. And while Black could use a few tweaks (bicep swivels!), Hasbro is seemingly far ahead of the game, learning lessons from Mattel and their own foray into 6” Marvel toys and applying them here. The shared tooling is basically well-hidden. When new pieces are needed, Hasbro is anticipating that sales will be good enough they can go for it (it still blows my mind how many parts will differ between the Storm & Sandtroopers) . The scale is good, the articulation is good, there are accessories (remember those?). It’s just a fun line.

It’s been predicted that I will become obsessed with the line and… I’ll be the first to admit that I’ll probably be buying more of these than I originally intended, not all, but more. And I’m definitely excited for my favorite characters in this scale. So while it may not quite push me into completism, it definitely feels like this line is the shot-in-the-arm 6” action figures need right now. That’s something for all of us to be happy about.