Sometimes as toy collectors, we can look across our displays and, no matter how many toys we have, only see the ones that aren’t there. They are the missing figures. The characters toy companies never got around to, never thought were important enough, or worse – the figures companies felt the need to show us at comicon in the “We’re Never Gonna Make These” case…

I love Ghostbusters. I’m looking forward to picking up Winston in December, and then Containment Unit and Venkman sometime next year. But, in the back of my mind, I’m holding on to some excitement. Coveting it. And Mattel is not going to get it from me until they make Real Ghostbusters toys. I think a large part of the MOTU success is that Mattel is copying the old toys. They’re not trying to make Filmation accurate characters or interpret the designs in a new way (I do love my 200x, but still). They’re taking toys from our youth and updating them to modern times (y’know, “like you remember”).

And while the movie figures are going to look slick as a set (and Harold Ramis can finally enjoy his likeness on an Egon toy), I think Mattel needs to approach Ghostbusters in the same way. I want a tall, crazy-haired Egon. I want Winston with his powder blue suit and red collar. And I want some of the villains unique to the TV show, specifically the Ghost of Halloween, Samhain.

If you’re a Ghostbusters fan, you know Samhain. He’s one of the few repeat Ghostbusters villains. He was the primary in a couple episodes of the cartoon and had numerous other cameos. He was also featured in some of the comics and though he never appeared in the cartoon, he was in the intro for the Extreme Ghostbusters too. 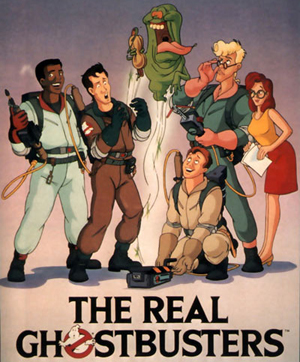 Power wise, he’s among the most powerful entities the Ghostbusters encounter (along with Gozer, Vigo, Sandman, & the Boogieman). Even the other ghosts were afraid of him, and they should be – he’s creepy. He may just be a dude in a purple robe with a pumpkin for a head, but it’s a scary pumpkin. His main power was that he could manipulate time to make eternal night. When he escaped from the containment unit in his second turn, he took over and reconfigured the firehouse as his personal fortress. I love that episode.

Now, Samhain has had a toy before. I have it. It was the only Extreme Ghostbusters toy that I picked up. It doesn’t really fit with anything scale wise and it had this weird cloak that snapped together in three places. And his pumpkin face separated from this teeth – I was never sure why. Still, I bought it – because it was Samhain. But now, twenty years later, I smell a chance for a good one. A 4H-sculpted one that can move. In my mind, it’s sweet and I want it.

Now, all of that may be far off with the pace Ghostbusters is moving right now. But some day, we’ll hopefully get our chance at the animated versions and their villains. Personally, I think they’ll sell even better than the movie stuff – but what do you think?

Are you ready for some Real Ghostbusters toys or are you content with movie based product? Please take a moment to post in our comments section and let us know.

25 thoughts on “Most Requested Figures: The Real Ghostbusters – Samhain”