We’ve got more than a few things we want to cover this week, so keep an eye out for these “bumper” reviews for smaller items! Yesterday I said my Armorvor was mostly rocking the “backpack” head for a mech look, but my Armorvor’s also been spending a lot of time with a TGB Customs’ Granthan head.

TGB Customs is an independent operation run by Marty Hansen, a.k.a. THEGODBEAST. Marty’s on the top of his game when it comes to molding & casting. I couldn’t tell you how long he’s been at it for sure, but I’ve got a few sweet MO2K accessories that I bought from him years ago when we were both a lot more active at He-Man.Org. Since then, Marty has moved big into designer toys, using high quality resin and producing some of the nicest stuff Glyos-compatible items in the last few years.

As I mentioned in my Armorvor Review yesterday, Marty was a crucial part of how that awesome figure came to be (even though he’ll take no credit for it). I really wanted one of his original handcast Armorvors last year, but I couldn’t find room in my toy budget for it. After he started producing those early Armorvors, some amazing head sculpts soon followed. Just to name a couple… the Sharkavor, Jason Frailey’s Lion, the Wyverillian, and the Granthan. 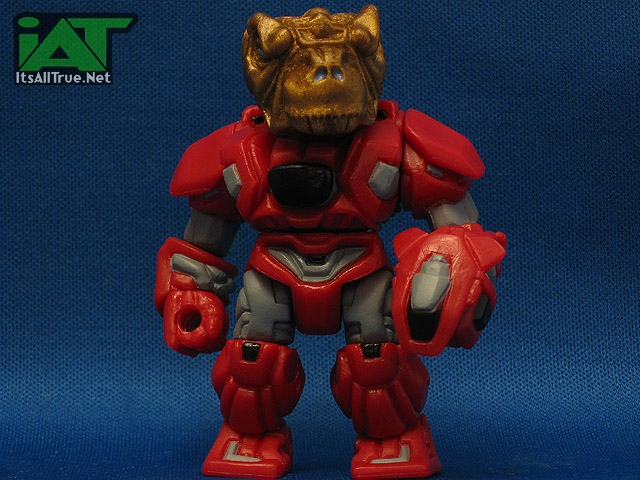 Without an Armorvor, I mainly stuck to the sidelines for those releases, but the Granthan head was simply too cool to pass up. I was able to snag the gold head pictured here not too long after C2E2. While plenty of great items have spun out of TGB Customs, the Granthan is probably my favorite. Marty just did such and amazing job on the sculpt. I hesitate to call the “little”, but there’s a ton of detail packed into it despite it’s size. And that’s without pointing out that it’s a great 3D rendering of Matt Doughty’s original concept to boot.

I poke fun at the size of the head, but I do love it. The Granthans aren’t planned to be a friendly race in the Glyos system and the slightly oversized head successfully gives them a more menacing overall look while working well with the more bulky Armorvor body. The only thing I haven’t been able to decide on is how I want to paint the eyes. Marty sells his items unpainted, so I need to pick an eye color. I’ve been photoshopping in various eye colors trying to find one I like, for this review I just did a basic silver/black, but I’m leaning towards something red. 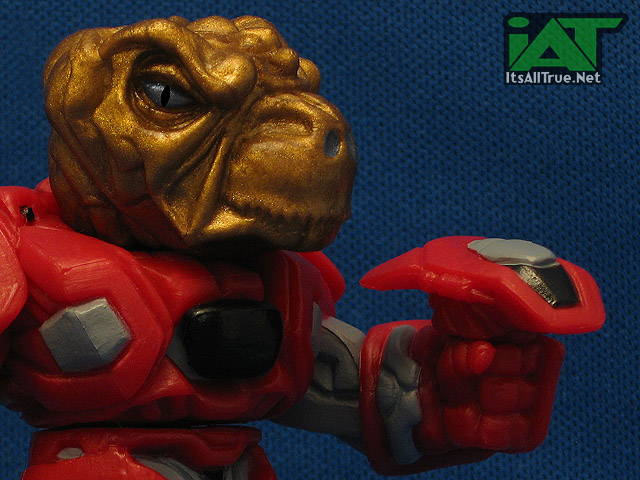 Overall, the only problem I have with this Granthan head is that I need more Armorvor bodies! While my gold Granthan wouldn’t mind holding on to my Venjorun Armorvor’s body one bit, I’d like to display them both. And that’s not to mention what TGB’s casting currently, Jason’s Frailey’s alligator head (I have got to snag one of those when more become available)!

If you’d like to pick up some of TGB’s heads (for Armorvors or for Glyos, Outer Space Men, or Spy Monkey Creations builds – it’ll work with ’em all), I think the best place to do business with TGB is on the October Toys Forum. That link there will take you to the TGB Customs thread where Marty usually has an updated post of what heads are available.