We’re spotlighting some of our favorite sites this week, but we also thought it’d be cool to let our readers in on the guest review action. Today’s article is a piece submitted by long-time reader Dayraven. He sends word of a toy I didn’t know existed: a Fox Sports Baseball Robot!

Dayraven: Hey IAT fans, this is Dayraven, getting his first guest review for IAT. As I’d love an eventual second review, I guess I better get this right, eh? Well, luckily for me, the subject of today’s review will, I think, prove tantalizing enough to warrant a read and recommend… so let’s get to it!

A bit of background: It was late in the first decade of the new millenium when the action figure world was floored by the unheralded arrival of the Fox Sports Robot aka Cleatus. He was a huge, heavy, football themed bot of a mascot used to transition football games to commercial and annoy the gridiron gang just in time to offer them Doritos succor. He was also one hell of an action figure, usable for customs, or just for being the coolest robot that no one saw coming. It recently came to light via BigBadToyStore that a new company, BK Toyz, is releasing new football Foxbots later this year based on the updated FSR model, but in anticipation of that arrival, I started researching dear old FSR, and discovered, much to my continued joy, that Actionheads, the company that produced the bot, had one more trick up their sleeve… the Fox Baseball Bot! I located a few images of not great quality, and finally tracked the guy down on Amazon. At a whopping 30 dollars for the fig, he is pricier than his Football cousin, so I figured, since I was taking the plunge, I’d pass my experience along to help any of you robofanatics decide if this is something for your collection. 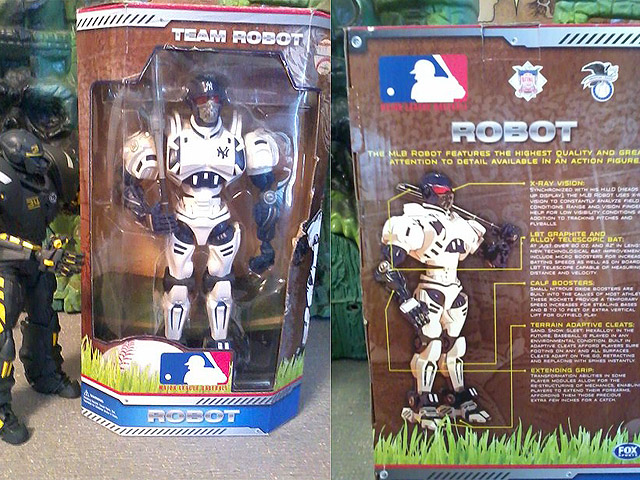 It is worth note that there was a Fox Baseball robot graphic, but this figure does not look like him. Don’t know exactly what happened there, but this FSBasebot is definitely better looking than that graphic, so I consider that a win.

The figure is again in the 10 inch scale of his Football cousin. His packaging is also similarly shaped to his cousin’s wide window box, though his is tricked out with the MLB logo, and an infield themed insert. 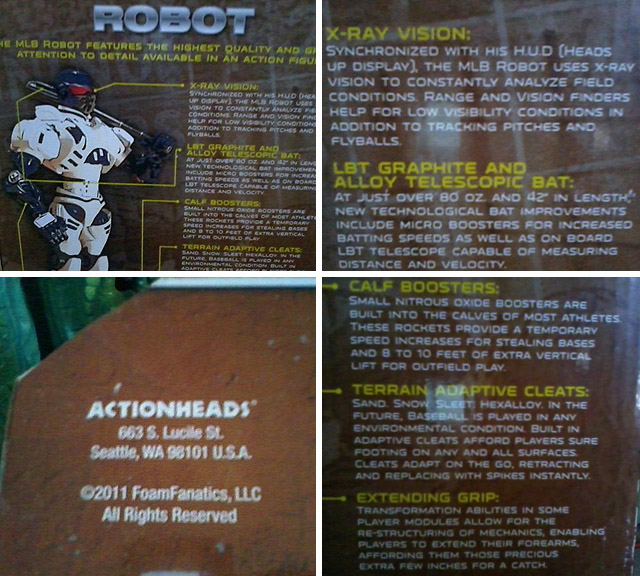 The box also features a detailed backstory that was lacking from the packaging of the football one. Apparently, this Fox Robot is not just a toy of the mascot, but is himself a player in some high tech fantasy baseball team. The package illuminates some of the custom features designed to keep this “player” in the game. We also see on the bottom panel that, like the Foxbot, this guy was made by Actionheads, only in 2011. 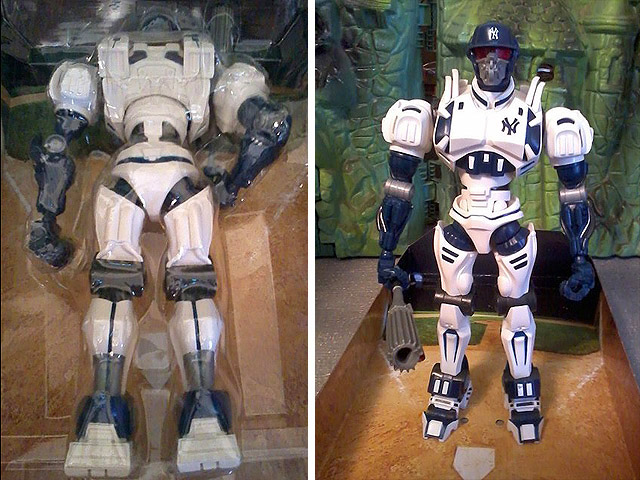 Inside the tray, I was pleasantly surprised to see that he was inserted with nary a twisty or rubber band. He is securely injected into the tray, so there’s nothing between you and your basebot.

As you can see, the insert behind him shows home plate and a stretch of infield. It’s a nice touch, and I did snag some photos of him on it… but being an opener, that insert was discarded fairly quickly. 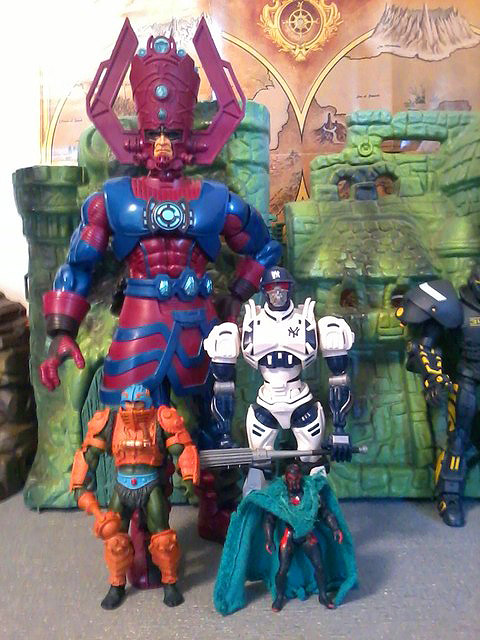 Scalewise, he’s about the same size as his football cousin, roughly 10 inches. I like the scale, as he has a nice amount of mass, thick articulation points, and he towers over most of your collection. His physique is actually more “muscular” than his Football cousin… is it possible he’s using Robine Growth Hormone? Quick, someone get a pint of his oil!