Day Two of Guest Review Week rolls on with a look at Lego Monster Fighters from the resolute DrRampageo! Doc recently launched his newest site, Doomkick.Com, and can often be found here in our comments section and forum. Only seemed right to put him to work! Have at it, Doc!

DrRampageo: Hello IAT readers! Dr Rampageo from DoomKick.com here with your guest review for today. When Noisy contacted me about doing a guest review I immediately started to rack my brain thinking of something awesome to review, I knew I wanted to stray from MOTUC/GI Joe course I have been plotting on DK recently with something different. After hitting all the local spots I came up not only empty handed, but also a little depressed at the state of retail toys right now. After a few days of trying to find something awesome to review it dawned on me, Monster Fighters Lego sets have been filling me with want as of late, so this fits the bill of new and different pretty easily. I am also a big fan of Vault’s Lego stuff when he posts it so off I went to buy some Legos. I went into the Purchase of this set with high hopes, and I actually came out of it a little more impressed than I thought I would be. 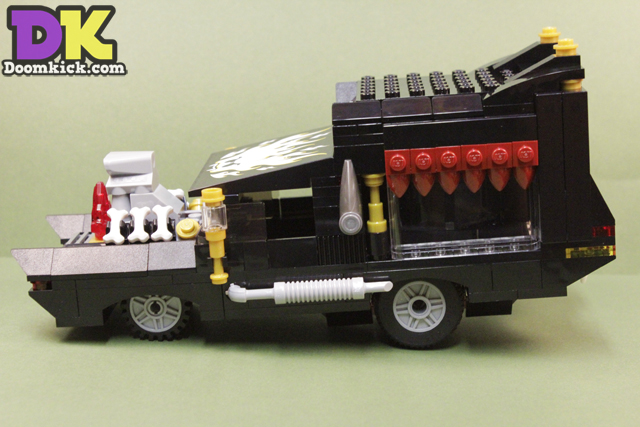 Monster Fighters Lego is a stroke of genius on the part of Lego, mixing monsters and 1800’s style with a futuristic/cybernetic twist is a pretty quick way into my heart , and judging by the some of the things I have seen people saying about this line, quite a few other people feel the same way. The Monsters are your classics Dracula, Wolfman, Creature, Frankenstein, Zombies, etc etc. The Story involves Lord Vampyre (Dracula) wanting to eclipse the sun, to do this he needs the power of the Moonstones, and to get the Moonstones obviously he will need the help of a bunch of other monsters, but as you know whenever the world is in trouble a group of intrepid heroes will step up to save the day, and in this world that is the Monster Fighters. If you want to the know the full story behind Monster Fighters the official website has a game you can play and bios of all the different characters, as well as pictures of the products. 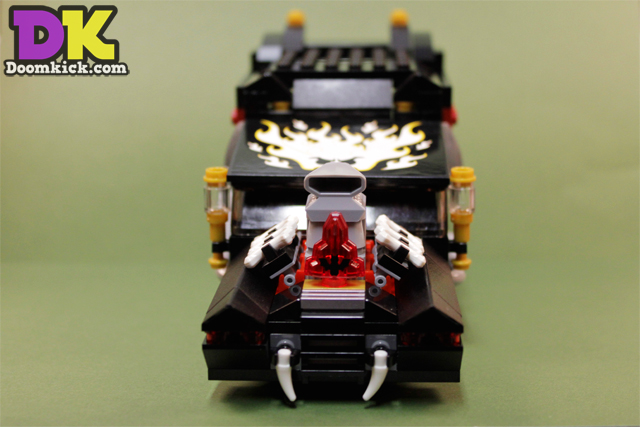 So standing in Target (a great place to get Legos at a decent price) and looking through the various sizes and price points of the MF sets I decided on the Vampyre Hearse set, I am a huge fan of Dracula and tricked out hearses, so that coupled with the middle of the road $35 price tag sold me on this set. The Ghost Train and Vampyre’s Castle sets while more pricey, looked phenomenal and if I ever decide to spend a ton of money on Lego sets those will be the first two I get along with the upcoming (Sept 2012) nearly $200 Haunted House set that looks like one of the best large scale Lego sets I have seen in ages. 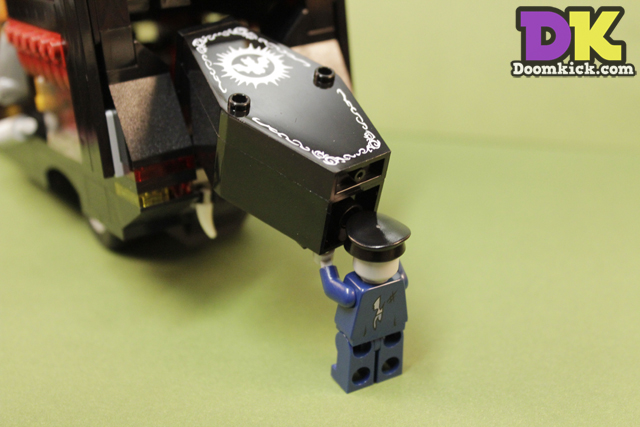 Reviewing Legos is a little different from writing reviews of other toys, sculpting is almost non existent, articulation is the same as it always has been, and with most stuff being tampos paint isn’t really a factor. So keeping that in mind I’m going to be talking about all the various parts of the set. 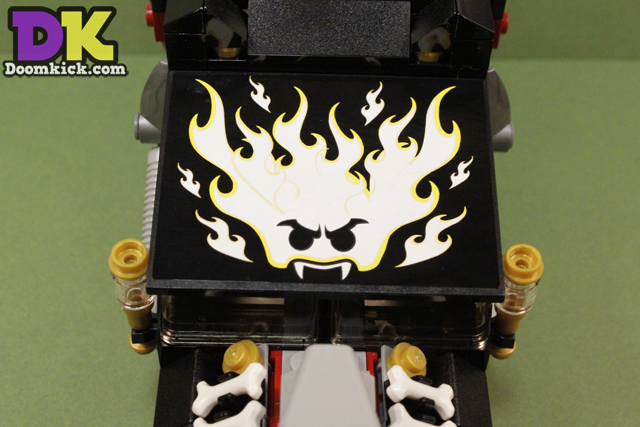 The main attraction of this set is the large tricked out hearse that took about forty minuets to build, there is quite a few pieces separated into two large bags with a few smaller bags inside them. Lego instructions work really well for building but you have to pay attention to what you are doing, the hearse was pretty easy to build and looks awesome when completed. The main action feature is the lever you can push to launch Dracula out of his coffin in the back of the hearse like a catapult, which works really well as you can send Drac flying across the room with ease. The lever mechanism construction is easy to assemble and install. When not being launched out the roof, the coffin stores in the back and has a removable lid so you can store Dracula inside it during the day time hours. There is a flaming Dracula face decal that goes on the roof above where the zombie driver sits that glows in the dark (sorry no glow pics) very well, and seems of a high quality that applied easy and clean. If you would like the driver to sit in the drivers seat it’s a simple matter of popping off the roof and sitting him down. The wheels are free rolling, and the engine is pretty detailed. Continue to Page 2…