Fourth in our five-part series featuring the ninth wave of DC Universe Classics, this review covers Deadshot, Wildcat, and Wildcat. 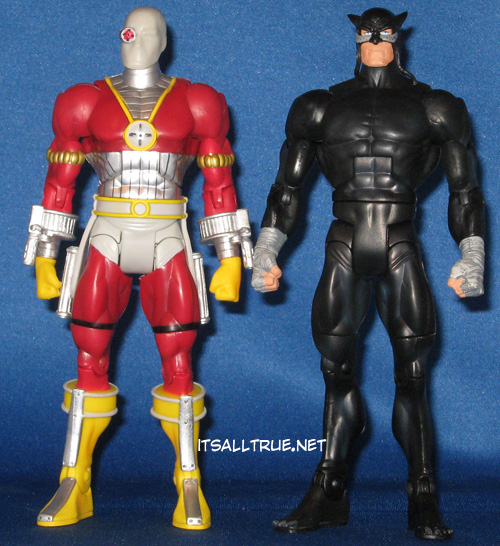 These two figures represent the “new pieces” dichotomy of DCUC9. More than other waves, this go around seemed to produce figures with a ton of new parts or hardly any at all. For Wildcat, we again see a character portrayed by a buck with only a new head and lower limbs. Specifically, Wildcat has new clawed feet (w/ textured souls), forearms with bandaged wrists, bandaged hands, and his head. The variant, which we’ll go into later, is exactly the same, but molded in a different color plastic.

Deadshot is the feast to Wildcat’s famine. More in line with the builds of SP Mantis, Canary, and Green Arrow, Deadshot features a new head, a new upper torso, new biceps, new forearms, new belt, new calves, and new feet to finish off his iconic look.

Articulation is standard on both figures, but they’re affected by a recent trend we’ve seen in the DCUC9 and DCUC10 figures – limited head articulation. The up and down motion is basically non-existent on these figures. We love the ball-jointed heads, but they need to work. It’s one of the most expressive joints on the figure and it being blocked takes us back to the sub-standard cut/swivel joints of years past. We as fans need to voice this concern to Mattel and get the figures back to the more freely moving heads of the earlier waves. 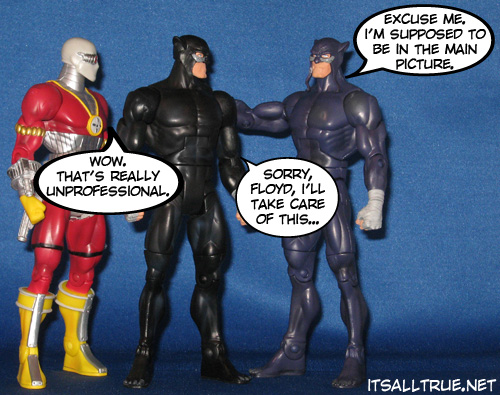 Paint really isn’t an issue with either Wildcat. Both of them are largely showing off their molded color and both of them look fine doing so. The paint apps on the whiskers seem to be a little sloppy – just a bunch of black dots, but it’s not that distracting. His eyes are molded on a separate piece than his cowl and painted well. The added depth really sells the otherwise monochromatic figure.

Deadshot is soaking up the cost of the wave in the paint department too. The multitude of paint apps has allowed more room for slop, but nothing on the one up for review is terribly distracting. The only complaint here is the strange mix of detailing on the torso. The vertical lines on his abdomen are done with black paint while the horizontal lines on his collar and molded, but not painted. These really should match one way or the other. It’s not a dealbreaker though, and Deadshot is still a great figure. 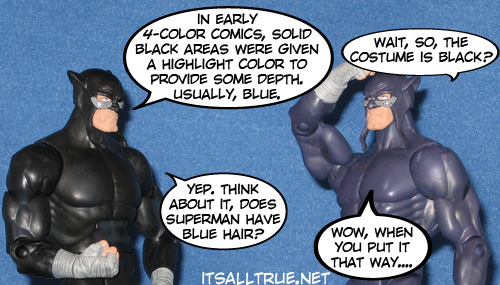 No accessories here and there aren’t any obvious ones missing either. We haven’t seen alternate heads as an accessory in this line, so it’s not appropriate to expect them, but these are both characters that go around unmasked about as much as they have their mask on. On Wildcat, it’s not so much of an issue. On Deadshot, even though he’s a great figure, it just doesn’t seem right to not have a Floyd Lawton head. Like Deathstroke, that would have made for an excellent variant. 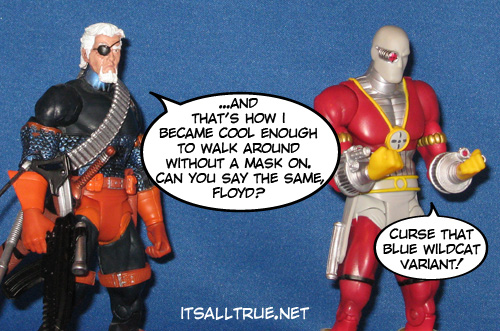 But, the variants in this wave were the amazing Super Powers Mantis and a secondary color on Wildcat. Obviously, there were some cost issues that went into those choices. At NYCC, we were shown a Guardian variant and only one Wildcat. From what I’ve heard, the Wildcat color variant was chosen as a cheaper alternate to the Guardian variant. That’s understandable – the wave features a lot of new tooling already.

But the purplish/blue Wildcat just seems like a waste. Yes, his costume has been shown that color now and again in the comics, but keep in the mind the source material. And we don’t mean the original black/blue coloring of golden age comics. We mean that his costume is based on a large cat. There are black large cats. There are not purplish/blue cats – at least we haven’t seen any. So, yes, in terms of cost, the Wildcat variant is fine because we’ve seen it in the comics.

But in a wave where the modern Guardian was shown, where a Ted Grant head would be sweet, where a Floyd Lawton head would be awesome, or where a Golden Age Black Canary was a simple change away, the blue Wildcat just seems unnecessary. 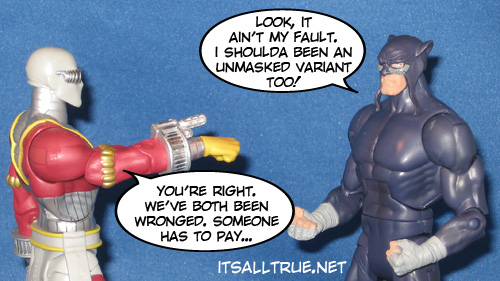 Overall, if you’ve been lucky enough to find wave nine, you’ve been treated to some great toys. Even figures of lesser known characters like Wildcat and Deadshot end up great. In them, we also get two big teambuilders with Wildcat adding to both the classic and modern incarnations of the JSA and Deadshot representing the Secret Six (and hopefully, that’s a team Mattel cares about). With the shelves filling up quickly from every corner of the DCUC, it’s hard to give them all front shelf space, but you want to.