I saw some somber news checking Twitter after leaving work this evening: Mattel has cancelled the 2012 Club Ecto-1 subscription program. There appears to be some shuffling going to keep the line alive and the subscription no longer fit in those plans. It kinda sucks, but the line’s not dead yet.

For starters, I had a sinking suspicion last week when Mattel announced the reopening of all the 2012 subscription programs except Ecto-1. I wasn’t sure to make of it or what Mattel meant with last week’s caveat:

*Yes, we know Ghostbusters™ Club Ecto-1 is not reopened at this time. Updated information about Club Ecto-1 will be announced soon. We have a few additional non-subscription items we are working on so, stay tuned for more news from your favorite paranormal investigators and exterminators!

Roughly a week later, it turns out that all the Ghostbusters items are non-subscription. Here’s tonight’s announcement:

You know how much love the Matty team has for Ghostbusters, and although we were ready to support a subscription in 2012, sales were lower than we expected. We regret to announce that we have to cancel the 2012 Club Ecto-1 subscription. All 2012 orders will be promptly refunded. If you purchased a 2012 subscription, you should see the refund in your account within 5-7 business days of your refund being processed, depending on your bank. All 2011 subscriptions will continue to ship as scheduled.

Please know that the Ghostbusters line isn’t over! To do right by all Ghostbusters fans, we’re still moving forward with the previously announced figures for 2012 (Ready to Believe You Peter with Taxi Cab Ghost, The Rookie, Dana as Zuul) and a fourth figure in the fall, to be announced. These figures will be available at our regular monthly sales. Like our other lines, costs have risen since the brand was launched and the price of the 6″ figures will increase to $22 each.

“Now on to brighter news. In celebration of the boo bustin’ boys’ favorite time of the year, we’re going to re-release some of your favorite figures during a special Ghostbusters Halloween sale. The sale will run from 10/17 through 10/31, and it’s the perfect time to fill in any missing characters in your collection and stock up on favorites. But wait… yes, there’s more! Not only will we have a great selection of characters, the October 17 sale will also bring the long-awaited Ghost Trap prop, plus the return of the Stay Puft Marshmallow Man!

Again, on behalf of the team, thanks for being a loyal fan. Long live the Ghostbusters!

As a newly-former Ghostbusters subscriber, this didn’t fill me with lots of hope, so I hit up the Ask Matty Ghostbusters Forum in search of something more. Toy Guru had made a few posts testing out the “loud, but not numerous” line (that I imagine GB collectors will enjoy about as much as the JLU collectors have) alongside one more concrete post about how 2012 will play out for Ghostbusters Classics:

The current plan is for 4 new 6″ figures sold day of only for 2012. The four will be Peter with Labcoat and taxi cab ghost, Dana as Zuul, the Rookie with trap and orange effect, and a fourth figure to be announced. The first three are already tool’d and there won’t be any changes at this time.

If you’re asking why the sub (and the guaranteed sales it brought) is cancelled, it’s because Mattel can’t/won’t fulfill the seven figure obligation it puts them under. That part makes sense, but still having to have the price increase is unfortunate. The bright side is that we each have the opportunity to reassess the figures at $22. I was looking forward to Labcoat Peter & the Taxi Cab Ghost as well as the Rookie with the new gear, but I’m not so interested in Dana as Zuul – particularly if she’s going to turn out as bad as Vinz Clortho.

My question is – is this all there is? Will these four be our last four? Maybe not. Here’s one more post from Toy Guru, at He-Man.Org of all places:

One of the issues with doing more Ghosts is they are all 100% sculpts. Much like MOTUC, we need the Fistos and the Webstors to help pay for the 100% sculpts like Sorceress or Ram Man.

We have a total annual budget for tooling and this is divided by sales. If we did all new 100% sculpted Ghosts like Sandman or Gozer it would kill the line even quicker. We need the lite tool’d figures to balance it out.

Looking back at the last three years of GB, I really think we did an amazing job. Multiple versions of each busters, Dana, Louis, Movie 2 villains, a giant Stay Puft. Really, with a few key characters like the receptionist and movie 1 villain, there isn’t that much more to do (Terror Dogs, Yanosh (sp? I’m sure, it’s late…). Do you really think the mayor would sell that well? This isn’t MOTU or DC with hundreds of characters. The 6″ GB line is far from over, and we still have some ideas for 2013…

“Amazing” might be overstating it just a little bit, but I digress. The last line is our first indicator that the line may extend into 2013, but – if you’ll permit me to use my fortune teller powers, “future offerings will be contingent on the sales of the 2012 items”. It’ll annoy you when you hear it, but it’s not as crazy as it sounds… 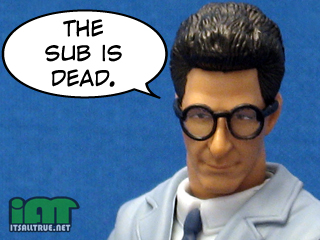 Anyway, I have mixed feelings about the whole thing. As has been well-documented here at IAT, I quit the Ghostbusters Classics line in early 2010 because it wasn’t going in a direction I enjoyed enough to spend money on. I let the line go (and so did many of my fellow site owners it seemed, it was difficult to find reviews to link to for our Ghostbusters Checklist).

Earlier this year, Mattel managed to suck me back in. There was a new Winston – one that Mattel had actually taken the time to hold back and fix instead of simply releasing it – and then there was the announcement of the Stay-Puft Marshmallow Man for SDCC. I grabbed a few items I had wanted, but skipped – the TRU 4pk, the Containment Unit, the figures with ghosts – and resolved to subscribe in 2012 and help support the line. Too little too late, I suppose. Still, I’ll be along for the ride for 2012… though don’t be surprised if there’s no Dana review…

(And yes, I know there’s still no Labcoat Egon or Stay-Puft review, I’m getting to it… promise…)